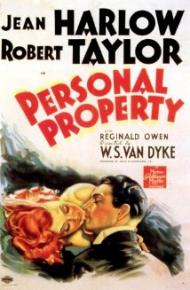 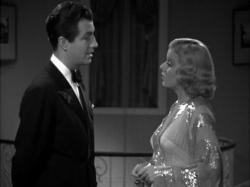 This was to be the final finished film of Jean Harlow's career and the last one released in her lifetime. She would start, but never finish Saratoga, which would be released after her death with a stand-in filling in for her uncompleted scenes. It's a lighthearted little romantic comedy that manages to amuse, especially in its sillier moments.

Harlow gets top billing, but Robert Taylor is the real star as Raymond Dabney, the black sheep of an upper crust, but nearly broke, English family. When the film opens, he's just emerged from prison where he's been serving time for selling a car that he hadn't paid for. His stuffy father and brother offer him 300 pounds if he'll leave the country to avoid embarrassing them. He declines their offer and instead runs into Harlow's Crystal in a bar and becomes instantly smitten with her. Unbeknownst to him, and in one of those coincidences that only seem to happen in the movies, she is actually engaged to his brother Claude, but Crystal is unaware that Raymond and Claude are related. Claude is marrying her for her money, but she's doing the same to him since both of them are secretly broke. Through an odd series of events that again could only happen in the movies, Raymond ends up posing as Crystal's butler at a dinner party attended by Raymond's family.

At just an hour and 20 minutes the story, bolstered by some laugh out loud screwball comedy, flies by. Harlow is radiant and she plays the comedy perfectly and with just the right light touch. She particularly shines in the scene where she teaches Raymond how to announce her guests. Taylor was a good looking guy and he's fine in the part, but he's a little too all-American to be playing this role. His accent is never mentioned, but it's an oddity considering how velly, velly English his family is. He also lacks the right level of sophistication. I can't help but think that William Powell, Cary Grant, or even Franchot Tone would have brought a little more flair to this character.

The script is filled with witty dialogue and evenly distributed among the supporting cast, who all get a moment in the spotlight. My favorite exchange between Taylor and Harlow occurs when she asks him why he was sent to prison and he jokingly tells her, "Murder", to which she replies, "I wish it had been suicide!" The zaniness builds to its climax during the dinner party, with much confusion of identity and lots of banter back and forth at cross purposes. The guest list is filled with a cast of eccentric characters all with their own odd quirks.

Directed by Woody "One Take" Van Dyke, the film only took two weeks to shoot and that sense of speedy urgency carries over into the story. Another interesting note of behind the scenes trivia is that while Harlow's character in the film is broke, she's wearing an 85-carat star sapphire ring in almost every scene. In real life the ring was a gift from William Powell and Harlow refused to take it off during filming.

Of all the types of films that they don't make anymore, screwball comedies of the type they made so well in the 1930s are the most missed. And watching Harlow shine so brightly in this one makes her early death at the tender age of 26 all the more tragic. 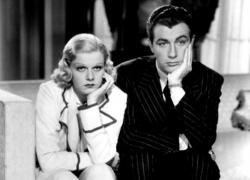 Personal Property is a minor gem. Despite her fading health, Jean Harlow was radiant and effortlessly funny as Crystal Wetherby. Scott mentioned the scene where she teaches Robert Taylor how to “butle”. She imitates several guests to great comic effect while putting Taylor through his paces. The following dinner party scene is the highlight of this often hilarious movie. As my brother wrote, based on the 1930 play by H.R. Harwood, Personal Property relies on the two most classic of all screwball comedy plot devices, mistaken identity coupled with a highly unlikely coincidence.

Every guest at the dinner party provides laughs. There's the annoying mother/daughter combo, and the absentminded old guy. And one guest who doesn't speak in words at all, but rather in a series of stuffy-sounding gibberish that's quite amusing. One of the funniest lines is when a guest asks Robert Taylor's character's brother what he does for a living and he replies, “I'm in ladies underwear.” Meaning that he sells lingerie but of course it comes across quite differently. The joke is compounded when their father proudly states that he too is in “ladies underwear.”

I agree with my brother as far as Robert Taylor goes. He was such an all-American type it's practically a joke unto itself that he's playing a Brit. He was MGM's top up-and-coming male star in 1937. The boyish-faced Taylor was quite the ladies man on screen. In just two years, and by the tender age of 25, he had already shared the screen with the likes of Greta Garbo, Joan Crawford, Irene Dunne, Barbara Stanwyck, Janet Gaynor, Loretta Young, Maureen O'Sullivan, Rosalind Russell and Eleanor Powell. This would be his one and only pairing with Harlow. He looks great and is a natural in front of the camera, but truth be told he lacked the impeccable comic timing of Cary Grant or William Powell.

The screwball comedy went out of fashion with the coming of the Second World War. Thank god for film. We still have these celluloid time capsules from an era that has long since vanished; when the silver screen tinkled with witty repartee and gracious movie stars attended cocktail parties dressed to the nines. Personal Property was Jean Harlow's last completed picture and she sparkles in it just like that diamond ring she refused to remove. She and Robert Taylor make it look so easy don't they? 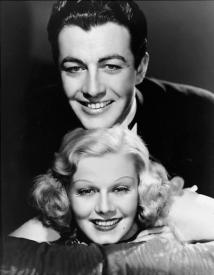 Jean Harlow and Robert Taylor sure made an attractive couple. They were, interestingly enough, the same age. Both were born in 1911. That may not sound like such a noteworthy statistic but Harlow was usually cast opposite much older men. Clark Gable was some ten years her senior while William Powell was 19 years older than her.

I agree with my brothers that Taylor is fine enough in the part and it is practically a joke that he is playing a Brit. This is most obvious when he is pretending to be a butler and an American girl asks him if he has ever considered working in the United States as all the finest American families have British butlers. Van Dyke should have directed Taylor to look directly into the camera at that point, as an obvious in joke.

Adding to Patrick’s note about Harlow’s health is the fact that she coughs in one scene for no apparent reason. In another scene a snotty young woman asks her how she feels. “Crystal darling, haven’t you been well? You look so tired.” Harlow, who always had a comeback, responds, “Needless to say, you’re the picture of health. You’ve gained weight haven’t you, very becoming though.”

Harlow may have been ailing during production of this film but she still had her swagger. Look at the scene where she is wearing a low cut off the shoulder wedding dress. She throws a bouquet onto the floor and takes a few steps with her shoulders moving in a manner of defiance and attitude. It is a brief but distinctly Harlow moment.

Personal Property starts as a nice enough film with the audience meeting Raymond and his family. It is not until we meet Crystal that the film really picks up. Harlow and Taylor have instant chemistry as he begins flirting with her and sneaks into her opera box. Harlow plays hard to get but we know where it is all heading. We have seen this kind of courtship many times before in these types of films. He pursues, she acts indignant, he continues to give chase and she eventually lets him catch her.

The plot gets better and the laughs increase as the story goes on. The best scenes are the ones shared by Taylor, “You’ll hate me by tomorrow.” and Harlow, “Well I am not exactly fond of you now.” I liked how she scares him by making him think her husband is large, walking upstairs and alive. I also liked the romantic scene where Harlow and Taylor have a picnic in the upstairs hallway between their bedrooms. Everything builds to the dinner party that my brothers wrote about, where the entire cast, including a mumbling English Lord that everyone but the audience can understand, gathers for madcap hijinks.

Powell had more charm than Taylor. Gable had a better connection with Harlow and Cary Grant was actually British. All could have done good things with the role of Raymond Dabney but I still like Taylor in the part. He does everything required. He mock sings at the opera and barks like a dog, all to get a laugh. Note the look of adoration on his face when he sees Harlow walk down the stairs dressed to the nines. That look would have seemed slightly predatorily coming from the elderly Gable or Powell.

Jean Harlow rarely made a bad film and she almost always made her co-stars look good. She bantered and flirted with the best of them. In Personal Property, she and Taylor lit up the screen with their youthful good looks and enthusiasm.