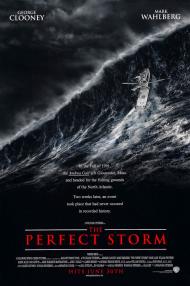 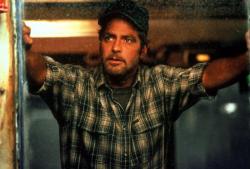 George Clooney in The Perfect Storm.

George Clooney and Mark Wahlberg reunite in this true story of a fishing boat caught in a horrible storm off the coast of New England. Coincidentally, this movie, like their last one, Three Kings, is set in 1991.

Clooney is the captain of The Andrea Gale and Wahlberg is his rookie first mate. They have just returned from an unsuccessful fishing trip and though it is late in the season decide to return to sea for one last chance at a big catch. Four other fishermen, two who cannot stand to be near each other, join them.

This movie spends its first half-hour introducing us to these men and the women who love them. All the while trying extremely hard to make us care about them. But it isn't until they set out to sea again, on what is to be a very fateful trip, that the movie becomes interesting.

From here The Perfect Storm turns into a riveting action flick with absolutely amazing visual effects. Watching these six men do battle with everything from boredom, a shark, each other and ultimately mother nature herself is escapist movie going at its finest.

I won't give away the ending but I will say that this movie, like the storm itself, refuses to pull any punches. 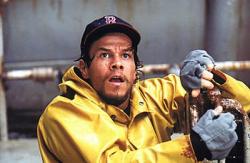 Mark Wahlberg in The Perfect Storm.

Like Patrick wrote, this movie spends a lot of time trying to get you to like these characters. It doesn't work. I really did not like any of them. The entire ship's crew has disastrous personal lives. They are real and honest portrayals of some real people, but I would have no desire to spend any amount of time with any of them.

The storm sequences were exciting and threateningly real. However, I don't care for the characters, and no disrespect for the real people being portrayed, but who am I to root for. I was not hoping for any of them to die, but I was not overly excited about any of them returning either.

Having never been a George Clooney fan, sorry ladies, he always looks as if watching himself in a mirror, I have little affection for his character. Other than his acting in O' Brother Where art Thou, I have never liked his work. He was by far the worst Batman in the series. So bad in fact that I would take Adam West over him.

This movie is a very sincere statement about men who live for the thrill of bringing in the catch. They have sour personal lives where divorce and affairs are the norm. Returning from sea with a boat load of fish are the few moments of glory these men get, and they are ready to sacrifice anything to get it. 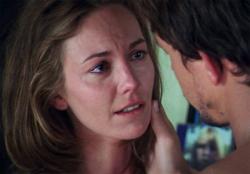 Diane Lane in The Perfect Storm.

I am in almost perfect agreement with my brothers. The scenes at sea during the storm are exciting, tense and well filmed. The opening half hour on land and the scenes of dialogue on the boat before the storm though, are melodramatic and pure soap opera. And not even very good soap opera.

Although, as my brothers said, the script tries hard to make you care about these characters, it doesn't do a very good job. The opening scenes aren't even needed. To prove it, you only have to look at how the action is divided between the crew of the Andrea Gail and the rescue helicopter. The scenes with the rescue helicopter crew, about whom we know nothing, are just as tense as the scenes on board the boat, where we know quite a bit about the crew.

The melodrama even interferes with the movie's most climatic moment. It's no spoiler, since the plot is loosely based on a well documented true story, but spoiler alert anyway. When the boat is riding that final, enormous wave and you're hoping that somehow they'll survive, but instead it is flipped over and simply overwhelmed. For a split second, as the boat starts to sink, you're in awe of the lethal, but somehow majestic power of nature. It's an awe inspiring moment, but then suddenly we cut to inside the overturned boat where all of the crew has somehow survived and each of them gets a melodramatic little final scene to spoil the moment.

Unlike Eric, I think Clooney is a fine enough actor. The rest of the cast is also quite adequate. You certainly can't fault the special effects or the action sequences. All it really needed was a better script, with less melodrama. And although it ends on a very somber note, a little bit of comic relief at the start wouldn't have gone amiss either. Likewise, I could have done without all the swelling music.

If you really want to enjoy this movie, just keep your remote control in hand and fast forward whenever anyone starts talking. The storm may have been perfect, but this movie is far from it.