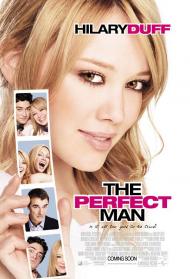 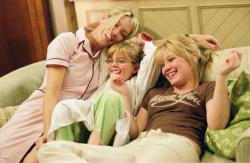 Any movie starring Hilary Duff is obviously aiming for the preteen girl market and while I'm willing to give any movie a chance, her latest vehicle, The Perfect Man, is likely to please that target audience and that target audience alone. It would take the level of sophistication of a ten-year old to enjoy the drippy and predictable plot this movie spoon-feeds you.

Duff stars as Holly, a teen girl whose single mother is constantly moving Holly and her sister around the country following every relationship breakup. And since Holly's mom, Jean (Locklear), seems to be some kind of loser magnet, the moving is pretty constant. As the movie opens, they've just moved to Brooklyn where Jean finds a job as a baker and a beautiful apartment in Brooklyn Heights that she is somehow able to afford just on her baker's salary.

Tired of the moving, Holly decides that what her mom needs is the perfect man, so she invents him. Using the advice of a friend's uncle (Noth), she starts sending flowers and letters to her mom from a secret admirer whom she bases on Noth. The plan seems to be working, but for how long can she keep up the pretense and how will Holly's own blossoming romance at school affect her? The ensuing sitcom quality hi-jinks bring unwanted answers to all of the plot's questions.

The problem with this movie isn't with its stars. Both Locklear and Noth, while not Oscar contending actors, have enough charm to carry a movie and Duff can do cutesy teen angst well enough. It's the writing where the movie suffers. The plot is predictable and implausible at the same time and the ending will surprise no one, not even the ten-year olds.

I have a new rule about movies. Any movie that features spontaneous dancing to music, not in a musical kind of way, but in a, "Oh, aren't we happy! Let's turn up the radio and all dance to show it," kind of way, is guaranteed to be bad. And it gets bonus badness points when the dancers are mother and daughter. Naturally, this movie features such a scene.

No one but the staunchest of Duff fans should waste their time with this movie and even they will have to be fooling themselves if they claim to enjoy it.