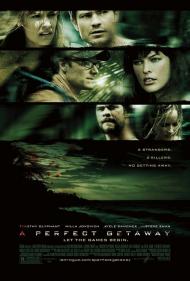 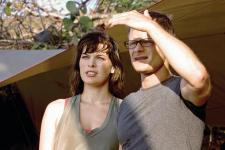 Milla Jovovich and Steve Zahn in A Perfect Getaway.

A Perfect Getaway, as all of the trailers and ads have emphasized, has a twist ending. It's a thriller that twists and turns right up until the big reveal when it suddenly loses its way. The backstory to what's going on doesn't ring true and certainly doesn't live up to the thrills and suspense that have come before it.

The story is simple, three couples' encounter each other on a trail in Hawaii. Cliff (Zahn) is a screenwriter on his honeymoon with Cydney (Jovovich). Nick is an ex-marine who's dating Gina, a country girl from the south. Cleo and Kale are hippies with Cleo being the friendly outgoing one while Kale is sinister and threatening. Naturally enough, one of these couples isn't what they seem as shortly into the movie the news comes out that there was a murder on one of the islands and that the suspects are a man and a woman. This leaves the audience and the couples all wondering which, if any, of these three couples is the murderer.

For the most part it doesn't even matter who the murderers are, the real fun of the movie is before you know anyway. Watching Cliff and Cydney, two bookish types try to keep up with outdoorsy and rugged Nick and Gina provides some of the movies best and funniest scenes. Although none of the actors playing these four are A-list stars, they are all talented b-actors who, apart from Mila, haven't really had the opportunity to star in their own movie until now. Zahn in particular has made a career out playing the comic sidekick and he's a stand out here.

The scenery is also gorgeous, but while at the same time as it makes you want to visit Hawaii, it also scares you into not wanting to go hiking on your own in any of these places.

My biggest disappointment in the story was that the explanation for the big reveal just doesn't ring true. It's not that I didn't buy who did it, but that I didn't like the explanation for why they did it. It's one of those moments that's the opposite of the ending of The Sixth Sense. No one's seeing dead people here, but what I mean is that where at the end of The Sixth Sense you thought, "Okay, now everything makes sense." But with this movie I was left thinking, "Well if that's true, then why did this, this and that happen?" It's just not as satisfying as it could have been.

Until that big moment though, the movie is a fun little roller coaster ride that entertains with its thrills and humor. Unfortunately though, it's like a roller coaster that takes you a long way up, building the anticipation as it goes, but then it turns out that the hill on the other side isn't as long or as steep as you'd hoped it would be. 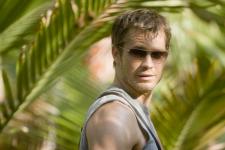 The twist ending could have been good had director/writer David Twohy put more thought into it. Once the killers are revealed you immediately wonder why they acted the way they did in several earlier scenes. So much does not make sense in hindsight that what I liked about the movie became overshadowed by what I did not.

Twohy tries to be cute with inside jokes. When Nick and Cliff discuss screenplays, just after meeting, they talk about plot and plot twists. Nick mentions a red herring, which is a character who makes things seem uncertain. Later on the trail, a passerby tells Cydney that there are twists and turns ahead. hahahahaha!

Zahn plays against type, but I like Olyphant. He has a glimmer of awareness in his eye one moment and then seems nuts the next. His stories and everyone’s reaction to them are some of the best parts. No matter what you think of Nick, he and Gina are a great couple. He calls her the love of his crazy life, and she says that he is a full man. The removing of the intestines scene is Gina's best.

Although the cast does what they can, Twohy seems to be working against them. The movie climaxes with a three way chase scene. Instead of showing each actor running through the jungle, Twohy went with three close ups, shown simultaneously. How did he think that would be effective? In a traditional chase scene the audience gets involved by judging how close the pursuer is getting. That cannot be done here. He might as well have skipped the chase altogether.

A Perfect Getaway is not a perfect movie, but it is based on a decent idea and has some good characters. Perhaps it would have worked better if Twohy had simply wrote it and someone else had directed?