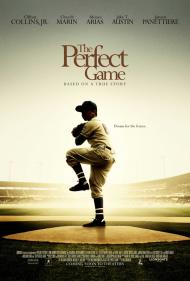 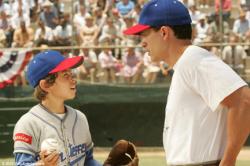 My youngest son and I have a tradition of watching the Little League World Series every year.  As it is currently going on in Williamsport, PA, we also decided to watch The Perfect Game.  It is the story of the very first team from outside the United States to ever win the title.  The story is more than 50 years old, I am not giving anything away.  Besides, the story is in the journey and not the destination.

That story began with a man named Cesar who worked for the St Louis Cardinals until he quit after not getting the coaching position he wanted.  He returned to his home of Monterrey, Mexico where he started work in a factory and drank lots of alcohol.  A local group of very poor boys loved baseball and played in a dirt field behind the church with the Padre's blessing.  They had no official equipment and played with a handmade ball.  That is until fate paid Monterrey a visit.

One day Angel Macias came upon a treasure lying in the dirt, a real baseball.  Cesar had lost it earlier in a drunken stupor.   Angel showed it to his friends who all responded with the same amazement.  Angel spent hours throwing the ball into a bucket against a wall as if pitching.  He meets Cesar, who is taken in by the boy's enthusiasm for the sport he use to work so closely with.   Before you know it he is coaching them and not drinking as much.  He calls some folks he knows in the States and gets Monterrey a Little League charter allowing them to officially enter tournament play.

With a three day pass, Cesar and the Padre took the team across the U.S. border to play in a tournament in Texas. They had no idea that the three-day pass would not be long enough.   They won in Texas and kept winning.  Calls to Washington had to be made and visas for the players extended.  They started to get noticed and the press began hanging around.  They were the first team from outside of the United States or Canada, to play in the series.  Angel Macias pitched in the championship game and the title of the movie tells you exactly what kind of game he pitched.  It remains the only perfect game ever thrown in the Little League championship game.

The movie seems hell bent on showing the bigotry of white America.  This starts early on when they run into a team in Mexico made up mostly of sons of American businessmen who live in Mexico.  Of course the white players are all rude and obnoxious.  The same two rednecks are shown shouting angrily from the stands at several games.  At one point, the boys are sent to use a "coloreds only" bathroom.  Later they take a tour of the Louisville slugger factory, where they make the baseball bats, and meet two Major League players who say derogatory remarks to their faces.  As none of the boys speak English, only Cesar knows how they are being treated.

Of course most Americans are rooting for the home team.  That is not a bad thing, and it would have worked better if the film had explained that better.  The most annoying scene happens in a restaurant where an American team is also eating.  The boys ask Cesar why the black kid on the other team has to eat by himself.  They then take their food over to eat with him.

The film throws in some sympathetic Americans.  A white chick reporter learns to empathize with them as she writes their story.  The waitress in the restaurant tells Cesar not to worry about the check as she plans to over charge the white team to make it up.   The team connects with black folks.  A black preacher takes over as the teams spiritual guide after the Padre's visa expires.  A black grounds crew member roots for them to win.

I will not argue that these things may have happened, but the point is a bit dragged out.  Some of the best moments have nothing to do with race or ethnicity.  At their first game in Texas the other team is shocked by the Monterrey players rolling around in the infield before the game.  Cesar explains that it is the first time they have ever seen grass.  At a press conference before the championship it is noted just how much shorter the Mexican team is compared to the American team.  It is in those types of moments that give the movie it's heart and tension.

One of my son's favorite parts of the film was recognizing several of the actors.  Three of them, Moises Arias, Jake T. Austin and Ryan Ochoa have all gone on to fame on tween television shows like The Wizards of Waverly Place, Hannah Montana and I Carly.

The Perfect Game is of course a story of underdogs.  These boys were all poor with very strict religious upbringings.  None spoke English.  The coach had to do all of the translating.  None of their parents are shown attending any of their games.  However, it is just too heavy handed in it's message of racial bigotry.  Like an announcer who keeps telling the same story throughout the game, it got annoying after the point was made several times and kept going on about it.