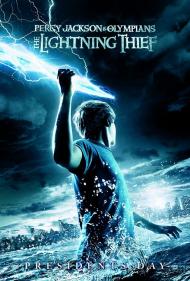 Percy Jackson is just your average ordinary miserable teenager. He has trouble learning in high school. He listens to his iPod instead of paying attention. His home life is not ideal. His mother lives with a man who treats them both callously. Percy has no memory of his real father.

One day he discovers his best friend, Grover is, "...some weird hybrid, man-goat thing." "The politically correct term is satyr." Grover corrects Percy, whose father is Poseidon (God of the seas). His teacher is a Centaur (half man/half horse). He also learns that he is the prime suspect in the stolen lightning bolt staff, belonging to Zeus (the head god).

Zeus wants the powerful weapon back, while Hades (god of the underworld) would love to get his hands on it. As mythological monsters have been dispatched to get it from him, Percy is rushed to a camp for Demigods. They are the children of Gods who have procreated with mortals. He befriends Luke, the son of Hermes, and has the hots for Annabeth, a daughter of Athena. After Hades captures Percy's mom, he goes on a quest with Annabeth and Grover to save her.

Although the movie is young adult oriented, it maintains enough tension to make for exciting action sequences. Both my sons thought this film was better than they expected. The first scene where Percy gets attacked actually caused my 14-year-old to jump in his seat. My favorite part was Medusa. I was squeamish when she was face to face with Percy, and her snakes are nipping at his face. “Come on. Sneak a peek.” Thurman coos, while Percy forces his eyes to stay closed.

I enjoyed this movie and liked that it teaches some Greek mythology but the world that it takes place in is not well defined. Thinking about it afterwards brought up some questions. Why do the Demigods practice with swords instead of guns? What exactly are they training for? If Percy, and likely other Demigods, has amazing powers, why do they not practice using them? Based on the first in a series of books, those questions may eventually get answered. I will watch any sequel and hopefully find out. 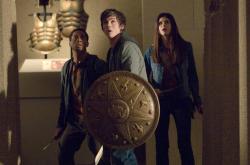 Like you Eric, this movie left me with some questions.  For instance, who's going to tell Percy that since Athena is Zeus's daughter and Percy is Zeus's son, Annabeth is actually Percy's niece?  Why didn't anyone ever tell Percy who his father was?  If they wanted to keep his identity a secret, why was he raised in the shadow of Mount Olympus?  If he was safe in the camp, why wasn't he taken there straight away when he was born?  Why did his magical powers suddenly manifest themselves during the movie?  How come he never noticed them before?  Why are they running around in the woods in little Greek uniforms?  And most importantly, why is the villain's plan so complicated and unnecessary (his whole plot is to deliver something to someone, so why go about it in such a round about way)?

What really struck me most about this Harry Potter rip-off was how Percy doesn't have to struggle at all.  He goes to camp to "train" but he's instantly good at sword-fighting.  The hot girl in camp instantly falls for him.  His father is always there to offer him advice.  Absolutely everything in the movie comes easy and is just handed to him.  Part of the secret of Harry Potter's appeal is that he's not the smartest, best looking, or coolest kid at Hogwarts.  You can relate to him.  Percy, on the other hand, is good at absolutely everything he tries to do.  He's the smartest, strongest and best fighter in camp from the moment he enters it.  It's a foregone conclusion that he's going to accomplish anything he wants to.  He's literally God's son.

Eric, you say there's tension in the film for grownups, but I'm still waiting to see it.  I have to agree that Uma is pretty good as Medusa, but that's about it.  I also have to give the writers credit for an original use of product placement when Percy uses the reflective surface on the back of his iPod to defeat Medusa.

None of the three young actors have much charisma.  Lerman is okay as Percy.  Jackson is embarrassing as the stereotypical comic black sidekick; with his hooves he's practically doing an Eddie Murphy as Donkey in Shrek impersonation.  And Daddario is fairly dull as Annabeth.  Brosnan plays a bored looking Centaur; sort of a half-Dumbledore, half-Hagrid type figure.

Frankly, I don't care how many questions are answered in the sequels since I definitely won't be rushing out to see them. 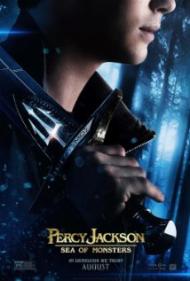