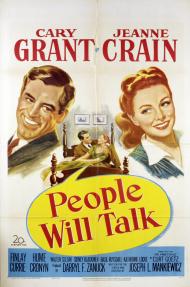 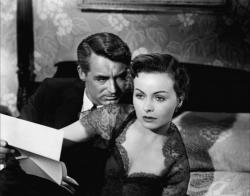 Cary Grant and Jeanne Crain in People Will Talk

People Will Talk is presented as a romantic comedy but it strives very hard for depth. It delivers lessons and lectures on life, death and even taxes. Some lines are witty, but too often we are stuck with such philosophical pap as, "Did it ever strike you that the day dies pretty much the way people do, fighting for every last minute of light before they give up to the dark."

The reason for the melancholic tone is the subject matter at hand. Cary Grant plays Dr. Noah Praetorius, a popular doctor and college professor.  He is being investigated by Professor Elwell, who dislikes Praetorius's approach and casual bedside manner.

The film must have been shocking for the times as it deals with some mature subjects. Jeanne Crain plays a woman who discovers she is pregnant, even though she has never been married. Her boyfriend was shipped out to Korea where he was killed in action. Just after leaving Grant's office with the knowledge that she is going to become a single mother, she tries to kill herself in a manner that practically certifies her as insane.

In the proper society of 1951, a single mother would have been a scandalous subject. Crain tells Grant that she cannot possibly tell her father she has gotten herself knocked up out of wedlock. This, of course, placed a huge amount of stress on her, but seconds after leaving Grant's office, she decides to put a gun to her head and fire it. Luckily for her, she is a horrible shot and Grant is able to save her.

The next conversation Grant and Crain have is one of the most WTF scenes I have ever heard. I will not give it away, but I could not believe he actually told her what he did. Although he does it in an attempt to help her, I would have understood completely if she had turned the gun on him at that point.

People Will Talk is a bit schizophrenic. We go from very dramatic personal moments to ones of levity. When Grant goes to talk with Crain's father, the soundtrack plays music much more appropriate for a comedy, even though the following scene is dramatic. The conversation eventually leads to my favorite bit of humor. Grant asks Crain's father, "How old were you when you learned to walk?" Her father answers," I could get around all right at four." Grant continues, "And how old were you when you left the farm?" Her father answers, "When I was Sixteen." Grant then delivers the punchline, "Surely, it didn't take you twelve years to make up your mind!"

The film finally heads in a romantic direction, but I didn't care if Grant and Crain got together. Crain tells Grant she loves him even though they have only shared two conversations at that point. Grant asks her why does she love him and Crain states, "I can't give you symptoms, It's love, not the measles." Crain seems far too crazy for Grant to actually love her in return. When he expresses it to her, I felt it was more out of pity than true affection.

People Will Talk likely caused people to talk in 1951 due to the adult content. It questions ethics and perceptions. Today, it may cause people to talk because of the odd dynamics between the leads. Both of their actions are sometimes questionable. Dr Praetorius is a role we are not used to seeing Grant play and it is one I am glad that he did not play often. 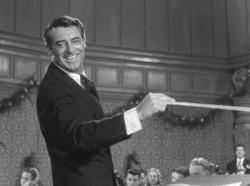 Cary Grant in People will Talk.

In 1951 Joseph L. Mankiewicz could probably have proposed adapting the phone book for the big screen and still been given the green light. For two years in a row he had won the Oscar for both directing and writing (for A Letter to Three Wives and All About Eve), a feat still unmatched. On paper, a romantic comedy starring Cary Grant as a doctor with a charming bedside manner who falls in love with one of his patients while battling a rival at a university, sounds like a sure thing. Unfortunately, as Eric wrote, it never finds the right balance between drama and comedy. There's still a lot to like about it, but it's not surprising to discover that it received zero Oscar nominations.

The film is based on a 1934 play, but Mankiewicz added his own contributions. According to TCM, he adapted the story following an unpleasant Emergency Room visit, which explains the many asides thrown in about the deplorable and inhuman face of modern medicine. Grant as Dr. Praetorius is forced to spout several pieces of dialogue on this topic and they feel as smoothly inserted into the story as if they were put there by a sledgehammer. Changes were also made to the script because of feedback from the Production Code Office, who felt that the story treated the illegitimacy and illicit sex too lightly. This accounts for the more somber tone that invades the story from time to time.

It is Grant who almost saves the film. His easygoing charm has never really been matched and it's easy to believe that his female patients would fall in love with him. His Dr. Praetorius is a very idealized and romanticized version of a Doctor, but because of Grant, we can almost believe that this saintly doctor is the real thing. I do agree with Eric that his love for Deborah is probably at least partly motivated by pity and probably also his doctor's instinct to help someone who's injured. However, Grant and Crain do share a nice chemistry, particularly in the lighter moments, such as when they banter in the dairy on the farm.

Part of the problem with the way the film moves jarringly from comedy to drama is caused by the opening scene, which is quite an amusing one. It begins with Hume Cronyn's Professor Elwell interviewing Sarah Pickett (Margaret Hamilton), Dr. Praetorius's former maid. The scene is played almost entirely for laughs as the spinsterish Miss Pickett doesn't even want the door closed while they talk since it wouldn't be proper. After this opening, I was set up to think there would be more comedy coming. And there is, but just not enough and not blended in smoothly enough. There are scenes of Grant and Crain discussing suicide one moment, and then a scene of Grant and his friends arguing like schoolboys over a model train in another.

Despite the film's flaws, I still seem to have enjoyed it more than Eric. If the script had been edited to remove some of Mankiewicz's hospital pet peeves and the tone had remained more consistently lighthearted, it might have been something of a classic. Even as is there are things to like about it, just not as many as there could have been. 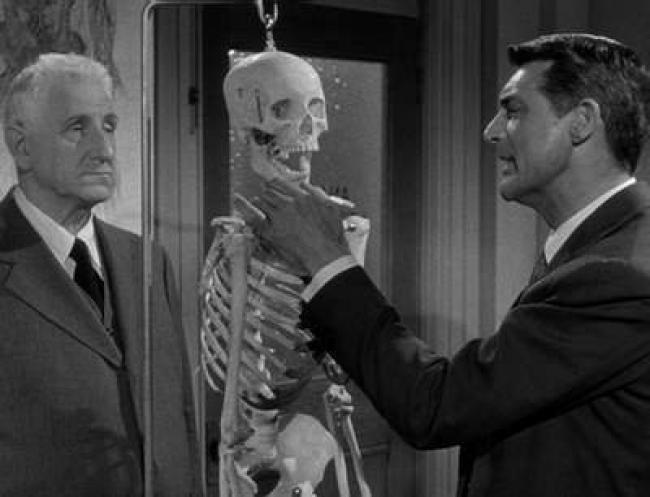 Finlay Currie and Cary Grant in People Will Talk.

Mankiewicz wasn't just on his high horse regarding the medical profession. Many have seen the filmmaker's choice of source material as making a statement about the communist witch hunts that occurred in Hollywood in the late 1940s and early 50s. Dr. Rodney Elwell perhaps reminded Mankiewicz of Cecil B. DeMille. The legendary -and famously conservative- director had once openly attacked Mankiewicz for his refusal to denounce communists working in the film industry.

At any rate, all of this pontificating takes away from the entertainment value of this disappointing movie, which signified a big comedown from the one-two punch of A Letter to Three Wives and All About Eve. Cary Grant gives a finely nuanced performance but even with all his inimitable charm and consummate ease in front of the camera, he cannot save the picture. I agree with my brothers that the script -as intelligently written and progressively thought-provoking for its day as it was- is overly talky and lacking in subtlety.

Eric mentioned Dr. Praetorius's good intentions for lying to his patient but I agree with him that it is a morally questionable act at best. This woman is far from stable -mentally or emotionally- so I was never able to fully invest in their relationship, which is based -from her point of view anyway- on misinformation. I do agree with Scott that Jeanne Crain and Cary Grant have a nice chemistry together, if only I could have rooted more for these characters. Of the supporting cast Walter Slezak and Finlay Currie are the standouts.

The script does contain a few trademark zingers, like when Dr. Praetorius says, “Professor Elwell, you are the only man I know who can say 'malignant' the way other people say 'Bingo!'.” Ahead of its time but uneven in tone and painfully didactic, People Will Talk was a rare mishit for writer/director Joe Mankiewicz.