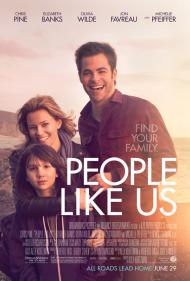 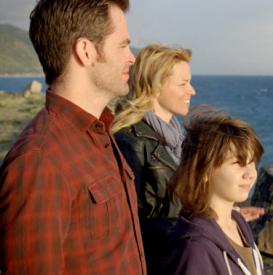 Chris Pine, Elizabeth Banks and Michael Hall D'Addario in People Like Us.

People Like Us is a family drama that goes for the heartstrings. It manages to evoke some real emotion even though it crosses the demarcation line into sappiness a few times. Chris Pine stars as Sam, an ethically challenged salesman who returns to L.A. for his father's funeral. There he is given some surprising news by his late father's attorney. It turns out Sam has a half-sister and a nephew he never knew about. And Sam's music producer father has left his eleven year old grandson $150,000 in cash, with the stipulation that Sam deliver the money in person.

Although the cast is terrific the plot is a bit sloppy. You have to accept the fact that the dead guy, who never seemed to be much of a father in life, has purposely decided to bring his children together after his death. Just why he left all that cash in a shaving kit and entrusted it to his estranged son to deliver to his previously unknown sister and her kid, is never fully explained. But perhaps an even bigger plot hole is just why Sam doesn't simply tell his sister who he is instead of allowing her to develop romantic feelings for him. Awkward! Sure it leads to a big dramatic revelation but it's a false note in an otherwise true to life family drama.

Still the movie does a decent job of exploring different family dynamics. Sam gets closer to his mom (played by a decidedly unglamorous Michelle Pfeiffer, smoothly transitioning into the older woman/mother category) and grows attached to the sibling he never knew he had and especially his troubled nephew. The characters are all fully fleshed-out and multilayered human beings. Chris Pine and Elizabeth Banks are both good, as is newcomer Michael Hall D'Addario as Josh. He's a smart-ass kid in desperate need of a strong male role model.

At times writer/director Alex Kurtzman blatantly attempts to manipulate the audience with overly sentimental scenes underscored by schmaltzy music. But even in its sappiest moments People Like Us maintains an authenticity to it because these flawed characters have been so vividly depicted. It's not the classic movie it tries to be but it is a solidly moving family drama with a sterling cast. 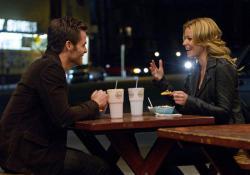 Chris Pine and Elizabeth Banks in People Like Us.

As Patrick said, this movie works overtime to evoke an emotional response from its audience. Luckily, its likable and talented cast helps make up for much of its sappiness.

I believe the reason Sam doesn't reveal to Frankie that he's her brother right away is partly out of shock and partly because he's considering keeping the money for himself. Then by the time he's realized how much he likes her and his nephew, it's too late to easily reveal the truth. It's definitely contrived and it should certainly have occurred to him that she would treat the attention of an attractive man as a romantic interest, but it is a reason. I also wondered, since she knew her father had recently died and that he had a son, why it never occurred to her to even suspect if Sam might not at least be connected to her dad.

Elizabeth Banks has been appearing regularly in movies for 10 years now but still hasn't really broken through to the A-list, although she gradually seems to be moving in that direction. She has the looks and the talent. Here she shows she can do drama as Frankie, the recovering alcoholic, single mother.

There's really not a bad performance in the film though. Pine does a decent enough job as Sam, certainly taking a step up from his last role in This Means War. Michelle Pfeiffer, who disappeared from our screens for too long, is likewise very good as Sam's mother.

Many of the details of the plot are pure soap opera and overtly melodramatic. Despite that though, I was never bored and was even touched on occasion.

For a movie to be truly great, it needs a good script, which this one is lacking. A talented cast alone can't make a good movie great, but they can make a so-so movie like this one into a fairly good one.

Michelle Pfeiffer and Chris Pine in People Like Us

I do not understand what my brothers are complaining about.  Scott wrote, "...this movie works overtime to evoke an emotional response from its audience..."  That is what movies are supposed to do.  If a movie does not make me feel anything it has failed.   Patrick wrote, "...writer/director Alex Kurtzman blatantly attempts to manipulate the audience with overly sentimental scenes..."  This coming from a guy who loves and has reviewed over 50 Bette Davis dramas!

Yes, People Like Us is a drama in which we wait for one character to reveal a secret to another.  Like Scott, I understood why Sam did not reveal himself right away to Frankie.  He was seriously considering keeping the money and Frankie makes it even harder after she tells Sam about her dad and her feelings for him and his "other" family.  Patrick, I think Sam's dad leaving all that cash in a shaving kit (hid it from his wife) and entrusting it to Sam to deliver it to Frankie and her kid, is explained throughout the film.  Of course he wanted them to meet.  More importantly, he wanted the money and their meeting to act as an apology for not being the father he could have been.

I agree with both my brothers though, that the plot is not perfect.  I never bought Sam and Josh's  relationship. Josh is only eleven but acts like he is several years older.  He is smart yet insecure.  He tried to impress some boys by blowing up the pool.  Yes he needs a male influence, but he trusts Sam far too easily.  He meets and takes a ride home with a middle aged stranger and never mentions any of it to his mom.  Even after Sam tells him to keep their meeting a secret, no light bulbs comes on?  This is the same smart ass that is not afraid of any punishment his mom can dish out and the same ballsy kid that sits behind the therapist's desk after she says to sit anywhere.

I also agree with my brothers that the leads are good.  I have always found Banks attractive, but here she shows she can pull off drama as well, or even better than comedy.  I had long written Pine off as just another actor getting by on the genetics passed onto him by his parents.  Here though, he also demonstrates that he is a legitimate actor.  The real scene stealer though is Pfeiffer.  You pity Lillian one moment, hate her the next and finally come to understand her.

The movies best moment is not the scene where Sam reveals his secret to Frankie.  Although that scene is as you would expect, the real heart grabber is the resolution between the half siblings.  I will not give details, but it was a brilliant way to bring the film together.  People Like Us is not going to win any awards, but it is a decent family drama that demonstrates that although we sometimes use secrets to keep us close to the ones we love, they ultimately have the opposite affect.