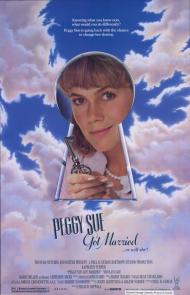 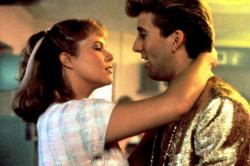 Kathleen Turner and Nicolas Cage in Peggy Sue Got Married

Released a year after Back to the Future, in which someone also goes back in time to the 1950s, Peggy Sue Got Married suffered by comparison, but still stands on its own. In 1986, Kathleen Turner was possibly the biggest female star in the world. Her adventures in time have little actual similarities to Michael J. Fox's.

In the midst of getting a divorce from her high school sweetheart, Peggy Sue attends her 25th high school reunion. Emotionally distraught, she collapses and awakes in 1960. Once she gets reacquainted with her nostalgia trip, she decides to explore why her life went the way it did and if she can make different decisions this time around.

She attends high school where she informs her math teacher, "Well, Mr Snelgrove, I happen to know that in the future I will not have the slightest use for algebra, and I speak from experience." It is one of the film's most famous lines, but there are many other good ones. The beatnik wannabe, Michael Fitzsimmons tells Peggy about his after high school plans, "I'm going to check out of this bourgeois motel, push myself from the dinner table and say, "No more Jell-o for me, mom!""

The cast features many famous faces from the past and many famous faces that had yet to be. The real standout is Nicolas Cage. He uses a nasal voice that really fits his youthful character. When arriving at Peggy's house, he says to a picture of Fabian, "You are the best, Make her love me. Feed me. Charge me."

My favorite scene is when Peggy goes on a date with Charlie and wants to have sex. The virgin Charlie freaks out. "Doesn't little Chuckie want to come out and play?" The middle aged Peggy Sue asks. The teenage Charlie responds in a nervous manner, "You mean my wang?"

Peggy approaches Charlie with 25 more years of life experience, including the knowledge that Charlie will one day cheat on her. Charlie is a senior in high school, who has no idea what Peggy is talking about half the time. At one point he gets so frustrated with her that he storms off crying, "I'm going to be just like Fabian."

Peggy Sue Got Married carries a wonderful sense of sentimentality. It makes me laugh and feel nostalgic, but like other Coppola films, it never gets the editing right. At the reunion, a crippled woman greets Peggy Sue. In the original script she was a classmate who was paralyzed doing gymnastics, and Peggy was to try and stop the accident. It never happens in the finished version. At one point Peggy tells Charlie that she has just one last thing to do at school, as if she knows she is going back. What that last thing is and how she knows she is going back is never explained. The trip to her grandfather's lodge is likewise senseless.

Still, with all its flaws, Peggy Sue Got Married remains a wonderful trip down memory lane with some genuinely funny moments. 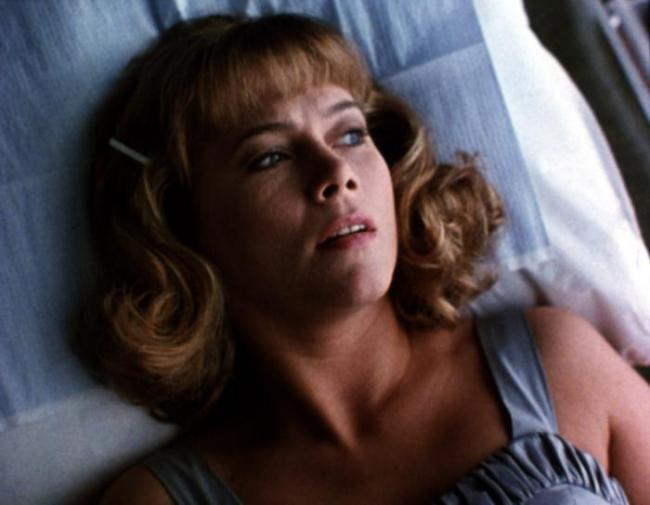 Peggy Sue Got Married does have some funny moments, but it's not really an outright comedy. Its best moments are tinged with bittersweet regret and nostalgia. Eric mentioned its release date coming so soon after Back to the Future and I wonder if that proximity, and the success of Michael J. Fox's film, didn't prompt the filmmakers behind this one to try and play up the comedy. If so, it's a pity, because its the more serious moments that are the most memorable.

I agree with Eric that the film's editing is a problem. He mentioned a few of the problems caused by it, but there's also the whole storyline with Peggy and Richard trying to capitalize on her knowledge of the future that starts promisingly, but then goes nowhere.

The real problem with the film though is that ultimately it's a love story and the central love story isn't strong enough. When Peggy wakes up in 1960 she sees it as the chance to make changes in her life. She can be a free and independent woman instead of one who got pregnant at 18 and married straight away. However, the resolution of the story (**spoiler alert**) is that she's still in love with Charlie and despite it all they are destined to be together. This storyline would carry more weight if Nicolas Cage didn't make some truly strange acting choices. The odd voice he puts on almost got him fired by Coppola and you have to wonder if he wasn't the director's nephew if he'd been able to keep his job or even have been hired in the first place. Cage seems to be playing the entire movie for laughs and seems so stupid in some scenes as to be almost mentally deficient. It's difficult to see what either adult or teenaged Peggy Sue sees in him. It's true that he's quite funny, but often at the expense of the movie.

It's the question posed by the central premise that is the most interesting. If you could go back in time to your 18 year old self, what would you do differently? Peggy Sue contemplates different things, most prominently not marrying Charlie. One thing that is never brought up, despite Peggy Sue admitting to missing her children while in the past, is that if she doesn't marry Charlie they will never be born. Surely, that, more than anything else, would influence her decision to marry Charlie.

Another minor problem with the film is the aging/youthening of the characters. Kathleen Turner was in her early 30s when she made this movie and looks it, both when she's supposed to be in her 40s and when she's supposed to be 18. The makeup and the acting in the opening reunion scene is overly done and very actorly. You can tell the actors are playing their parts how they think someone in their 40s would act, but it's all overdone and phony at times.

It's Kathleen Turner's performance that holds the film together despite its flaws. She's funny and charming at all the right moments and yet she brings a dramatic weight to the part that keeps the movie grounded. You want her to find happiness and you care about Peggy Sue because of Turner. She was nominated for a Best Actress Oscar for this part and she earned it. If only the writing and the editing lived up to the quality of her performance. 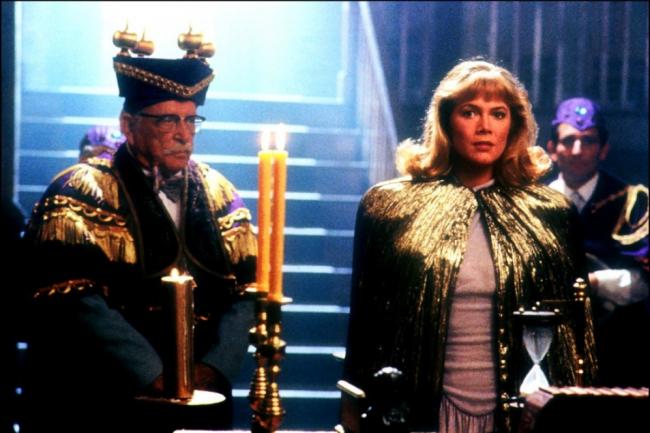 Leon Ames and Kathleen Turner in Peggy Sue Got Married.

As both my brothers already mentioned, the script is filled with contradictions as far as the time travel aspect of the story goes. In 1960 Peggy Sue is shown giving the young Richard advice about the future, yet at the beginning of the movie (in 1985) he was already a billionaire computer genius without the benefit of her foresight. The movie does hint that Peggy Sue may have actually traveled through time with the book dedication by the writer Peggy Sue sleeps with while back in 1960. But by having Peggy Sue shrug it off as a case of mistaken identity, leaves it completely up to the viewer.

As with all time travel movies it's best not to dwell too much on the pesky details. Just sit back and enjoy the trip through time. The movie drips with nostaglia for the pre-Vietnam era of American suburbia. Seen today it contains the added element of nostalgia for the mid-1980s. I laughed when Peggy Sue makes a reference to boomboxes.

I'm with Eric as far as Cage's nasally speaking voice goes. I too thought it perfectly suited the character and at no time did I think the young Charlie was mentally deficient. Cage is simply doing a very stereotypical version of a naive teenager from the era. He may be overshadowed by Turner's gloriously nuanced performance as Peggy Sue, but he certainly holds his own.

Kathleen Turner is a delight from start to finish. Whether freaking out her future husband with her aggressive sexual behavior or being freaked out herself when she answers the phone to hear the voice of her grandmother (who has been long dead in 1985) she is never less than 100% believable. It is truly an Oscar caliber performance.

It's fun seeing future stars Jim Carrey and Helen Hunt before they were famous. Hunt isn't given much to do as Peggy Sue's daughter, but Carrey exhibits a bit of his manic comic style in a few brief scenes. This was also the final screen appearance for old timers, Leon Ames and John Carradine. Ames and Maureen O'Sullivan are a hoot as Peggy Sue's grandparents, who take the news of her time-traveling in stride.

Peggy Sue Got Married has an interesting premise and a script overflowing with nostalgia. The cast is terrific. So good in fact, that they almost overcome the shortcomings in the script and the editing.