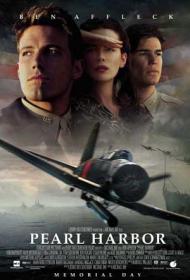 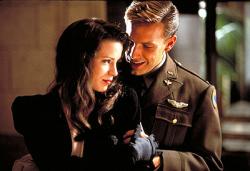 What an uneven, ambitious, glorious mess. Pearl Harbor tries way too hard to do way too much and ends up being at best brilliant and at worst completely inane. The love triangle, which is very reminiscent of the silent classic Wings, was a tired cliché then. You know, two best friends become flyboys, fall in love with the same girl, then go off to war and end up in a touching death scene together. The long slow build-up to the imminent attack; wherein the major characters are introduced, though contrived, is fairly entertaining. The follow-up events are rather anti-climactic and in a three hour movie should have been shortened. The attack itself is absolutely awe-inspiring! Every penny of the 100 million plus spent on the movie can be clearly seen. The utter chaos and confusion, the bombs exploding everywhere, the madness, the heroism, the gut-wrenching deaths. The forty-five or so minutes of the movie based on the actual attack for which it is named is groundbreaking moviemaking in every sense of the word. The rest is just so-so. The leads all do competent work but nothing extraordinary. John Voight is quite good as FDR and Alec Baldwin and Cuba Gooding jr., though both under-used, turn in their usual intense performances in stereotypical roles. Sot (to make this review as short as the movie is long) go see Pearl Harbor for what it is, 45 minutes of cutting-edge eye-candy wrapped in too many layers of old war movie cliché's. 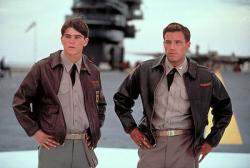 I can think of two lines to sum up my opinion of Pearl Harbor. The first is spoken halfway through the film by one of the pilots standing next to an unexploded bomb. "It's a dud!" he cries. "You're right!" I thought in unison. The other line was spoken by a fellow movie patron, I overheard on a cell phone in the men's room of the theatre. "This movie is fucking boring," he told whoever was on the other end of the line, and again I was in complete agreement.

This movie is bad. I mean really bad. I mean so bad, that I found myself looking at my watch after only 15 minutes. So bad, that I walked out of the theatre before it was even over. One of the few times I have ever done that in my life.

There are two big problems with this movie; the script and the direction. The script because of it's inane, and overly melodramatic dialogue as evidenced right from the beginning when the two boys playing in the fake plane declare they are 'fighting for the land of the free and the home of the brave.' This silly dialogue, which I suppose is meant to evoke patriotism in the heart of the viewer, is carried along throughout the movie, including moments such Cuba Gooding Jr.'s character sharing a (sniff) touching moment with his dying captain. I could barely keep the groans from escaping from my mouth.

The problem I had with the direction was the films propensity to attempt to make every moment, no matter how mundane, into something incredibly dramatic. Why have pilot's simply walk across an air strip, when you can have them walk in slow motion, with the wind blowing through their hair? Every scene vainly attempts to drag some emotion out of the viewer rather than let them react to the scenes on their own.

As for the forty-five minute climatic attack, what can I say except, 'Yawn'. I felt nothing for the characters so why should I feel anything when they are attacked? And did I mention the attack happens half-way through the movie? This leaves a dismal hour of movie time in which to deal with the after effects.

I have nothing but respect for the men and women who lost their lives on that 'date which will live in infamy'. I'm only sorry, that this film is the only legacy we can give them. 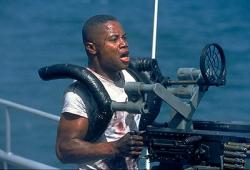 Watching Pearl Harbor was like eating a decent piece of meat surrounded by a whole lot of fat. Is the meat worth digging through all the fat to get to. In my opinion; no. What follows are scenes that needed to be cut to trim this movie to a digestible film.

The opening scene with the best friends as boys. Yeah its a big slice of Americana pie but so what. We get so many references later in the film about their childhood friendship that this scene isn't needed. All of the scenes featuring the Japanese Navy and high command. We know who the enemy is, we don't need to see them until the actual attack. Dialogue where a Japanese officer says something to the effect of "We will attack them at dawn and surprise them" is not plot exposition. Its historical fact and unnecessary to be in the film.

The slow motion scenes in the hospital were overkill. Okay we get it, war is hell even on the non combatants. It didn't advance the plot or develop a character.

Cuba Gooding Jr. portrays a real life character. A cook that manned a gun and shot down enemy planes. That is all fine and dandy but we don't need to see him in a boxing match, or visiting the nurse, or crying over his CO.

The air raid on Tokyo 4 months after the bombing of Pearl Harbor was completely unnecessary. If the writer wanted one of the main leads to die dramatically it should have happened during the attack at Pearl Harbor. Instead we have to watch a additional half hour of movie just so this death can occur.

There, I just cut an hour out of this movie. It is now a watchable piece of film. I left in all the good parts. That is to say I didn't touch any of the battle scene at Pearl Harbor. Those scenes were good, But they didn't really involve any of the main characters. The attack was Man driven machines blowing up manned ships. The main characters kind of run around the outskirts of these scenes and only occasionally become part of it.

The movie truly only had one part that I really liked. It was the humorous and charming meeting of Ben Affleck's flyboy and the Nurse. In these scenes Ben demonstrates he has the acting ability and charm to sustain a long career. The love triangle that follows is a an unoriginal melodramatic soap opera.

The movie takes place in several countries and states. The entire movie should have happened at Pearl Harbor. It could have been a sort of Gone With The Wind. Instead of the burning of Atlanta we could of had the burning of Pearl Harbor. What we have instead is a long, often boring, often predictable cluttered mess.

With my editing this would be a 3 star movie. As is it, it is only 2 stars and that is mostly because I am a sucker for a World War II movie.