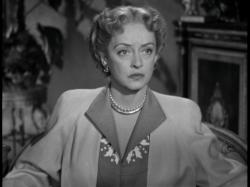 Bette Davis as Joyce Ramsey in Payment on Demand.

Payment on Demand was the first movie Bette Davis made after leaving Warner Brothers, the studio she had called home for 18 years. It was while filming this movie in the spring of 1950 that Bette got the call to replace Claudette Colbert as Margo Channing in a little movie called All About Eve. The powers at RKO (where Payment was being made) were smart enough to delay the release of their Bette Davis movie until after the sure-fire hit Eve, thus capitalizing on Davis’ resurgent popularity.

Although not in the same league as that classic film, Payment on Demand features vintage Bette Davis upstaging everyone around her as she stalks across the screen, hands constantly in motion. This rarely shown movie is a must see for her fans as she elevates the rather trite script with her impeccable enunciation and aggressive screen presence.

Originally titled The Story of a Divorce, which is exactly what the movie is about, it begins with Joyce Ramsey being told by her successful corporation attorney and vice-president of a steel company husband David (Barry Sullivan) that he wants a divorce after more than twenty years of marriage. When he moves into his club and begins seeing another woman Joyce is unable to keep the news from their two daughters, the older of whom is about to get married while the younger one is still in high school.

Joyce begins looking back on the history of her and David’s relationship and (with the use of dreamy flashbacks) we see just how single-mindedly ambitious she has been. Always pushing David and even lying for him to get ahead in business.

Davis was in her early 40s at the time. She was made to look older for the present day scenes so that by contrast she could more believably play the younger Joyce. Likewise grey hair was added to Barry Sullivan’s temples to make him older for the present day scenes and then removed in the flashbacks. In the earliest scene Davis and Sullivan play their characters as teenagers having a clandestine meeting in a barn. The scene is brief and shot in heavy shadow. Davis does a good job of speaking in a girlish voice.

During a meeting with their divorce attorneys Joyce throws down a gauntlet to David, demanding a full payment (hence the newer awkward title) of her awarded alimony and not giving him the option of making monthly installments. It is in this scene that Davis the actress gets to really shine, reveling in Joyce’s cold-blooded ruthlessness.

As the movie heads into its final act, Joyce sets sail on a Caribbean cruise awaiting her final divorce decree. She begins an affair with a married father and visits an old divorced woman she met years earlier. This woman (played by the legendary stage actress Jane Cowl in what would be her final role) surrounds herself with young men (that might or might not be gay) she pays to keep her company, thus providing Joyce a view of what her lonely old age might look like.

SPOILER ALERT: Joyce reunites with David for the wedding of their younger daughter. Afterwards David drives her home and suggests they get back together. Joyce, wanting to make sure he didn’t just make the offer out of pity, tells him to wait a few days to see if he really wants her back, but tells him that she still loves and misses him. The End.

I get that Joyce is lonely but just why David wants her back I couldn’t say. Perhaps it’s the fact that Joyce seems to have become a completely different person in these final scenes. It makes little sense and diminishes all that has happened before. It would have helped if there had been more passion and chemistry between Davis and Sullivan in the flashback scenes.

As is, Payment on Demand is merely a chance for Davis to act up a storm even though her character’s personality and motivations are as changeable as the weather. Like I said before this one is for Bette Davis fans only.