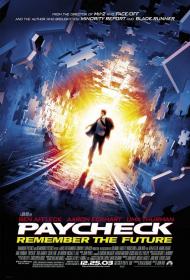 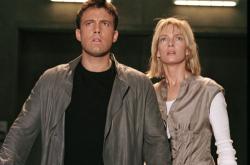 Paycheck is a big budget B-movie. Despite being directed by John Woo, starring Ben Affleck and Uma Thurman, and featuring high quality production work, it never manages to raise itself beyond anything but a popcorn movie. It's entertaining enough while you watch it, although it breaks no new ground, but will have slipped from your memory not long after you've left the theater.

Affleck plays Michael Jennings, a reverse-engineer who has his memory wiped at the conclusion of each job so that he will be unable to reveal any of his employer's secrets. When an old friend of his offers him a job with a paycheck so huge that he'll never have to work again, Jennings jumps at the chance, despite the fact that it will mean giving up three years of his life, and despite the fact that his 'old friend' (Eckhart) is quite obviously the villain of this movie.

Three years later, with his job done and memory wiped again, Jennings is left wondering over a few things. He can't understand why he gave up his payment for this job or why he mailed himself an envelope full of seemingly innocent items. He becomes even more confused when the FBI want to arrest him and his 'old friend' wants to kill him. Using only the clues that he mailed himself, he must piece together his past. What follows are your standard gunfights, car chases, and explosions while he tries to unravel the mystery.

Normally I'm not a big fan of Ben Affleck. He seems to come across very stiff in his acting, but here he is at his most relaxed as he single-handedly holds the movie together. Ben should also stick with his stylist and wardrobe crew from this movie as well; since this is the most suave, he's ever looked.

With John Woo's stylish direction and the appearance of Uma Thurman, if nothing else, there are plenty of beautiful things to look at during the course of this movie. Although anyone expecting to see lots of Uma should be warned that she has a relatively small part, appearing in less than a third of the film.

Oh sure, there are plenty of plot holes throughout the story and you definitely need to check your disbelief before you walk into the theater, but if you are able to, you'll find Paycheck to be a pleasant enough diversion, at least while you're watching it. 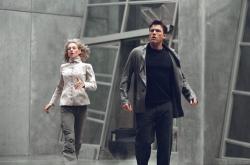 I know I know. Time travel movies are fantasies and thus to pick apart plot holes is possibly being too picky. However, Paycheck has so many holes that I must discuss. Michael sees his future so he sends himself items that he will need to help him. HELLO! As soon as he uses one of his items, his future is then altered thus making the rest of the items useless. Perhaps he kept looking at his changed future and adjusted the items to fit each new future as it was altered by the previous item. He knew he would need a get-away vehicle so he sent himself the keys to a motorcycle. If he is locked away and his mail is all being screened, how did he get the motorcycle parked in a public space and left there all this time? If all of his mail is being screened for security reasons why would security let him mail his security pass? If Rethrick wants him dead so badly why did he not just kill him when he was locked up? Save your paycheck and rent something else.