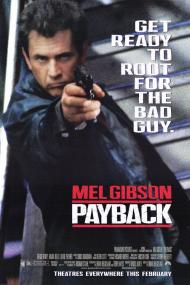 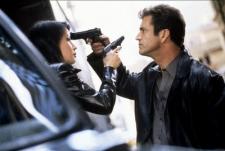 Lucy Liu getting turned on by Mel Gibsons gun.

I had never seen Payback in the theaters. It did respectable enough business at the box office, but I never got around to seeing it. With Gibson returning to acting in Edge of Darkness, I decided to give it a watch.

Small time crooks Porter and Val, rob 140 grand from some Chinese gangsters, with the plan of splitting the money. Val breaks the deal and takes all of it, while Porter's wife shoots Porter in the back. They leave him for dead, only he does not die. He gets himself to a back alley doctor and recuperates for 5 months, "You'd think after five months of lying on my back, I would have given up any idea of getting even, just be a nice guy and call it a day. Nice guys are fine: you have to have somebody to take advantage of... but they always finish last."

Porter narrates throughout the film, "Not many people know what their life's worth is. I do. Seventy grand. That's what they took from me. And that's what I was going to get back." What follows is Porter on a quest for his money. He works his way up the criminal ladder. He starts at the bottom of the rung; the street drug peddler. With the help of his prostitute girlfriend, he eventually makes it to the top rung, and comes face to face with the mob boss himself. "$70,000? Hell, my suits are worth more than that!"

On his quest, Porter meets an assortment of criminals, including some cops on the take, "Crooked cops. Do they come in any other way? If I'd been just a little dumber, I could have joined the force myself." Lucy Liu steals every scene she is in playing a sado masochist prostitute. In one of her first scenes she walks into Val's apartment and slugs him, "On your knees bitch, I want satisfaction." She says to him. He then hits her back and thus starts her foreplay.

Payback is the kind of violent/action film Mel Gibson fans have come to expect from him, and Porter is the kind of anti-hero role he does so well. His method of stealing the 140 grand is brilliant in it simplicity. The torture scene is gruesome. It will make you curl your toes. "Tell me where John is and I'll finish you quick. I promise you won't have to find out what your left ball tastes like." A mob boss tells him.

I always like a movie with memorable lines and Payback is full of them. His girlfriend says to him, "I think all those stories about you being dead are true. You're just too thick-headed to admit it." The final line is a voice over of Porter, "We went for breakfast in Canada. We made a deal; if she'd stop hookin', I'd stop shooting people...Maybe we were aiming high." I sure hope Gibson does not stop shooting people, (in movies) and keeps aiming high at the box office.

Mel Gibson gets some Payback.

I saw Payback in the theater, but hadn't watched it in years. Seems the intervening time hadn't dimmed my enjoyment in the least. I liked it then and I liked it now.

In recent years Gibson has been more a butt of jokes and the center of controversy than a famous actor and that's a shame because no matter what you think of him personally, you have to admit the guy knows how to entertain. He has a cocky yet likable charisma that he puts to good use, helping you cheer on a psychopathic killer as the "good" guy.

The reason this movie works so well is because it's a pure revenge fantasy. All of us have stress in our lives, Porter just deals with his a little differently than the rest of us. When he sees a problem he just shoots it or bludgeons it to death. It's simple but satisfying and sometimes you can't help but wish that the problems in our our own lives could be dealt with so succinctly.

I agree with you Eric that the script contains some great lines. It's not so surprising when you realize that it was (mostly) written and directed by Brian Helgeland, the screenwriter of L.A. Confidential and A Knight's Tale among other films. Reportedly there was some conflict between Helgeland and the studio and the final cut of the film wasn't entirely his, but you can definitely hear his influence, particularly in the dialogue.

This was the second filmed adaptation of the book "The Hunter" (the first version starred Lee Marvin), which was the first of over 20 books featuring the character of Porter (Parker in the books). With so many literary sequels to choose from it's a shame they never made a cinematic one to this movie. Maybe now that Mel is acting again, they can finally get around to it. 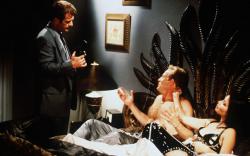 Like Scott, I had seen this movie in its initial theatrical run back in the 90s but had forgotten most of the plot details. I agree that it's a decent revenge fantasy told in a pseudo film noir style. It's not in black & white but it was shot with a tinge of shadowy blue. Gibson's hard-boiled narration and tough-as-nails actions are entertaining to listen to and watch unfold. It definitely crosses the line of believability on several occasions but it plays pretty fast and furious. You just have to be willing to accept that Porter is crazy enough to go to such extreme lengths for a mere 70 large.

Brian Helgeland was fired as director and approximately 30 percent of the movie was shot without him, including all of Kris Kristofferson's scenes (in Helgeland's version mob boss Bronson was never actually shown but was voiced by Sally Kellerman). The original director's cut was restored in 2005 for a DVD release. One humorous bit of trivia concerns the tagline. In Gibson's native Australia the word root was changed to cheer because “to root” is Aussie slang for sexual intercourse.

The story arc is done well as Porter works his way up the mob ladder, encountering various and sundry gangsters, small time crooks, and cops on the take along the way, and the ending delivers a real bang (literally). But to be honest, Payback is a bit too gratuitously gruesome for my tastes. Perhaps if Porter had been seeking revenge for the murder of a loved one I would have been willing to watch a man get his toes systematically smashed. I can't really identify with or root for a guy that is willing to suffer this much bodily pain just to stubbornly recover some cash that he stole from someone else in the first place.