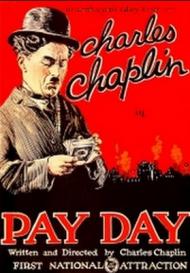 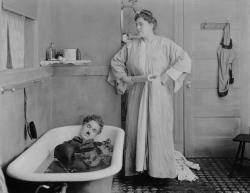 Pay Day was a movie that Chaplin never wanted to make. After the success of The Kid he wanted to stretch his wings by writing/directing and starring in other feature length movies. Unfortunately he was still under contract to First National. The studio wanted him to make more shorts as they were cheaper to produce and therefore generated a larger profit. Pay Day fulfilled his contractual obligations and marked the last 2-reeler appearance by the Little Tramp.

Chaplin plays a brick-layer. In the movies' funniest scene he deftly juggles bricks tossed up at him from below. The timing of a freight elevator going up and down is well done. He gets paid and quibbles with the foreman over the amount. He goes out on the town and gets rip roaring drunk. There is an amusing (and shot at night) scene with Chaplin attempting to board an extremely crowded trolley car. He eventually stumbles home at 5 a.m. His wife, asleep with a large rolling pin in her hands, wakes up and gives Charlie hell. The End.

It is clear that Chaplin’s heart wasn’t in this movie (although he would later say it was his favorite of all the shorts he made (perhaps this was stated facetiously?)). The plot is a rehash of ideas he had already done in funnier movies. The Little Tramp wreaking havoc at a job was done better in both Work and The Pawnshop. For Chaplin staggering home drunk see either One A.M. or Mabel’s Married Life.

Pay Day is historically important as the final short appearance of the iconic Little Tramp character, it is otherwise completely forgettable. 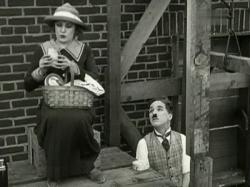 This might not be Chaplin's best short, or even the most original, but it's still pretty entertaining, particularly if you're fan of his work. Maybe he no longer wanted to work in the medium of the short, but he was a still a master of the art form.

What struck me most about this short is that while the main character dresses and moves like the little Tramp, his situation isn't typical of the character. For one thing, he's not a tramp at all. He's not only employed, but he's also married with a home. Normally, the Tramp is outside of society, but here he's very much a part of it. And in many of his appearances, the Tramp looks for love with some gentle, young woman, who he sometimes ends up with and sometimes doesn't. His wife here though, is anything but gentle or young. She's quite the domineering shrew. I know that over the years the Tramp appeared in any number of different situations, but I normally picture him as more footloose and fancy free than this.

Like Patrick, I found the scenes with the bricks to be the funniest and most memorable. It was either filmed in reverse or Chaplin was the most talented brick catcher who ever lived. These scenes on the building site reminded me of a Bugs Bunny cartoon and I was once again reminded how much Bugs owed a debt to the Little Tramp.

The other amusing scene was also mentioned by Patrick and that is the one on the trolley car. As he mentioned, it was shot and night, which was innovative for the time. The lighting, which was probably sophisticated for the time, seems fairly crude by today's standards, consisting as it does of a single giant spotlight.

In some ways Chaplin reminds me of another artist of the day, F. Scott Fitzgerald. Both the author and the filmmaker created short and long works. Their greatest works of art were reserved for their novels and feature length films, but they both also produced a great number of shorter works that were more simple and very popular forms of entertainment. Chaplin may not have wanted to make this film, but he showed one last time that he was still a genius of the silent short. 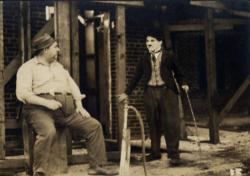 The brick stacking scene was clearly filmed in reverse, but does not diminish the gag in the least. The beauty of so many silent comedies is timing, and the elevator antics at the work site demonstrate that very well. I also enjoy such subtle sight gags as his horrible wife sleeping with a rolling pin at the ready.

My absolute favorite bit though was Mack Swain's belly. How can someone have a stomach like that? Looking at him made me feel down right sexy. Whereas some people are fat all over, Swain carried it all in his gut. From his chest up he was normal in size but his waist line was freakishly huge. He must have needed a mirror to see his own penis.

I am not sure how sarcastic Chaplin may have been when he called this his favorite short, but I found it to be one of his more enjoyable. I like the sight gags on the job. I laughed at his drunken journey home. I smiled when he and Swain shared the same two jackets and Swain dragged him past the policeman whom Chaplin tipped his hat to.

Scott wrote that this was not a typical Little Tramp short as he was employed and married. This allows Chaplin's character to be more accessible to audiences. More movie going audiences could relate to a man with a job and a wife that demand things of him than a lovelorn tramp.