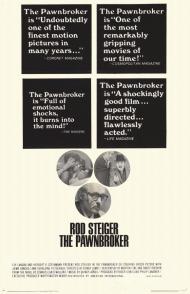 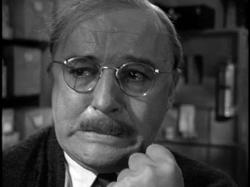 Rod Steiger in The Pawnbroker.

What a great movie. What a depressing movie. The Pawnbroker is one hell of a great, depressing movie. It is filled with incredibly rich characters, showcases some of the greatest screen acting ever and features a gripping narrative. But the subject matter and lead character are so completely tragic.

Rod Steiger stars as Sol Nazerman, a survivor of Nazi concentration camps, he now runs a pawnshop in Spanish Harlem. He is a man that never recovered from the loss of his family during the war. As the 25th anniversary of their deaths occurs, Saul's existence reaches a breaking point.

Sol is waaay beyond bitter. He is a man who goes through the motions of life without really feeling anything. He worships money and nothing else. Yet Steiger's brilliant portrayal of the man shows so well the kindness that still exists inside the brittle shell.

In spite of himself he has real relationships with many of his customers. There is the black, homeless guy who comes in to the pawnshop to discuss ancient Greek philosophy; also an assortment of junkies, thugs and various down-on-their-luck strangers pass in and out. One middle-classed white woman, (Geraldine Fitzgerald) recently moved to the neighborhood and filled with the need to help others, tries to impose herself into Sol's life. They eventually begin a friendship of sorts, or at least as much of one as Sol is capable.

There is also the Puerto Rican kid that works for Sol and whom Sol teaches about making money. He's young and ambitious and looks up to Sol as a father figure. Their relationship leads to the tragic climax, but I won't give it away. For those who haven't seen this movie it is much better if you don't know. Just take my word for it that it ain't a happy ending. Although I like to believe that Sol is somehow healed at the end.

The Pawnbroker was made in 1964 and it was one of the first mainstream American films to show naked breasts. It was also way ahead of its time in terms of the racial make-up and interactions of the characters. For example Brock Peters (best known as Tom Robinson in To Kill a Mockingbird) plays Rodriguez, the wealthy gangster that supports Sol's business and launders his money through the pawnshop. In one scene Sol is at his apartment when a young blond guy enters and goes directly upstairs. Rodriguez then immediately excuses himself and heads quickly up the stairs after the young guy. Implying, without openly stating, that they are lovers.

But it is Rod Steiger's staggering portrayal of Sol Nazerman that makes this a 4 star movie. It ranks with Marlon Brando's Stanley Kowalski and Bette Davis' Margo Channing as one of the greatest performances ever captured on film. (Too bad he lost the Oscar to Lee Marvin in Cat Ballou) His performance alone is reason enough to watch this sad, sad movie.

I wonder if they realized that the movie was released in the United States on Hitler's birthday, April 20th?