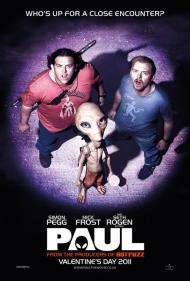 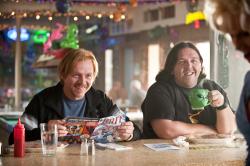 Although Sean of the Dead has grown on me, Paul is the Pegg/Frost film I have enjoyed the most after only one viewing.  Like their other film work together, this pays homage to a film genre while skewering it at the same time.  Both of my teenage sons laughed, but they did not catch all of the in-jokes.  It will help greatly if you have seen plenty of science fiction films.  If you do not instantly recognize lines like, "Boring conversation anyway." and "Get away from her, you bitch." then you will miss plenty.

Graeme and Clive are two English science fiction geeks on vacation in the United States.  They are constantly referred to as British nerds.  After attending Comic Con, they decide to rent an RV and take a road trip to Area 51 and Roswell.  Along the way they pick up an actual alien named Paul.

This is the best role of Seth Rogen's career.  I may even forgive him for ruining Green Hornet.  When they first meet, Greame asks Paul if he is going to probe them.  Paul answers, "Why does everyone always assume that? What am I doing? Am I harvesting farts? How much can I learn from an ass?"

Paul is on the run from those famous dark suit wearing secret government types, but is always in a jovial mood.  They agree to take him to meet a ship from his home planet, what else?   The location will not surprise anyone who has seen Close Encounters of the Third Kind.  In fact, in a flashback scene, Steven Spielberg and Paul have a conversation about some movie ideas.  Apparently he has had a major influence on pop culture, "Agent Mulder was my idea! "

The movie is littered with references and lines from films and television shows.  "Are you gonna draw me like your French girls, Jack?"  "I'm on a mission from God!"  The one obvious reference missing, unless Scott catches something I did not, is Doctor Who.  The long running popular British science fiction television series is apparently absent here.  Sure Pegg and Frost are paying homage to American films but the Doctor is very well known to science fiction fans in the United States, and these guys are British.

The boys pick up a one eyed devout Christian (Wiig) in a trailer park, only to spend several minutes dispelling her beliefs.  After Paul enlightens her, she decides she wants to fornicate and grabs Pegg's crotch.  As Patrick was offended by a two second gay joke in MacGruber, I found this film's on going anti-Christianity to be needlessly over-the-top.  Why is it always Christianity and Judaism that movies make fun of and never Islam?  I think audiences would whoop it up if Paul had enlightened a Muslim extremist. This movie leaves out mention of Doctor Who, so as to cater to an American audience, but spends several minutes mocking Christianity, the predominant American religion?

As long as you're not a Christian, or if you're a Christian with a broad sense of humor, Paul is a real treat for science fiction film fans and those who would rather hear Seth Rogen than look at him. 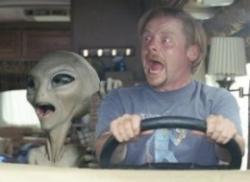 Paul (voiced by Seth Rogen) and Simon Pegg in Paul.

You said it yourself Eric. Christianity is the most predominant religion in America, so it makes more sense that Graeme and Clive would run into one of them than it does for them to run into a Muslim, especially in an RV park in the middle of nowhere. And given the well known stance that hardcore Christians have against evolution, it makes them the perfect foil for an alien visitor. Lastly, the difference between Patrick being offended by a gay joke and you being offended by a Christian joke, is that Patrick is gay, while you're not (unless you've been hiding something for all these years) a Christian. I knew that as soon as Ruth's character showed up however, that you would jump all over the way they wrote her part.

Being that I'm a huge fan of the Pegg/Frost partnership and a lover of science fiction, I found a lot to enjoy in this movie. It also helps that I'm nearly the same age as the two of them as the sci-fi references scattered throughout the movie really are from my generation. It doesn't surprise me Eric that Ryan and Kyle didn't catch all the in-jokes as most of the movies the jokes are referring to, came out long before either of them was born. The X-Files is probably the most recent science fiction mentioned and that started in the 1990s. The other jokes refer heavily to the Spielberg oeuvre of the late 1970s and early 80s, along with the original Star Wars movies and Aliens, among other 80s classics. You were surprised by the lack of Doctor Who references Eric, but I was surprised they didn't throw in an inside Star Trek joke, given that Pegg is the new Scotty.

Like you Eric, I even enjoyed Rogen as Paul. Maybe he should stick to voice work because normally I am not a fan of his, but he perfectly embodies the little green guy here.  Maybe it's not having to look at his face, or maybe it's just that he should stick to supporting parts.

The wide-eyed, middle-aged fan boys of Pegg and Frost and their friendship is what really makes this movie work. They are so comfortable together and share a comic chemistry that makes them one of the best comic double-acts working today. They've both found limited success on their own, but they are even funnier when together. Nick Frost in particular is one of those people who can make me laugh just by looking at him.

Although like their earlier movies, Sean of the Dead and Hot Fuzz, this movie is a spoof tribute, it somehow feels gentler than those last two movies. Maybe it's just that there is less blood and violence, but it doesn't feel quite as edgy as those two movies, or maybe because it's set in America, it just doesn't feel as British. Regardless, it is still a very funny and enjoyable movie that I'm sure I will watch and rewatch many times. 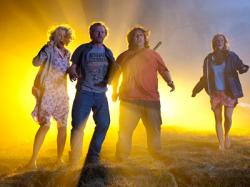 Pegg and Frost are a winning team and with Paul they do a great job of poking fun at science-fiction tropes while also paying sincere homage to the genre. The story moves quickly, the CGI isn't overly intrusive and the cast of comic actors are all appropriately goofy. Sure the plot could have been more sturdily constructed but that's a minor complaint in a movie meant to be this silly.

I agree that Seth Rogen really shines doing voice work. His speaking voice is instantly recognizable, he has natural comic timing and a way with a line. He knows what words to emphasize to get the maximum laugh. He can take a simple statement like, “Eyes forward butt horn.” and make it funnier with his delivery. I also think Paul is one of the most entertaining of all the CGI characters I've seen thus far. If Gollum is at one extreme and Jar Jar Binks at the other then Paul is somewhere safely in the middle.

Paul is a total comic book geek fantasy. I mean these guys don't even have to try to find an alien, he finds them. And what a great pal he turns out to be. He's smart, has amazing powers and a great sense of humor and is just full of witty quips and one-liners. He leads Graeme and Clive on a wild adventure and they even pick up a girlfriend for one of the geeks along the way. Isn't that every fanboy's dream?

The climax is exciting and funny, although it was overkill having Blythe Danner use Sigourney Weaver's line against her, before punching her lights out. I didn't think the movie was offensive to Christians any more than it was offensive to Americans in general. Neither the locals they encounter, most of whom are shown to be ignorant rednecks, nor the FBI agents in pursuit of them, are portrayed positively. But then this is a comedy and a good-natured spoof so it works. I don't know if it will ever happen but there were talks of a sequel that would borrow another page from the Alien handbook and be called Pauls. I'd go to see it.