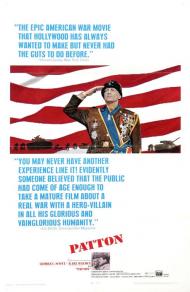 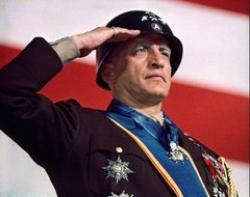 Patton was released in 1970 at the height of the United States' involvement in Vietnam. It was nominated for Best Picture the same year as M*A*S*H, a war movie that with hindsight seems more representative of that year. And yet, Patton, a movie about World War II that ultimately celebrates a man for whom war above all else was the pinnacle of man's achievements, was the movie that walked away with the Best Picture Oscar (and 6 others). I find that fact fascinating. Almost as fascinating as the man portrayed in this brilliant film.

General George S. Patton is played by actor George C. Scott who won the Oscar for his portrayal, but famously refused to accept it, stating that he didn't want to compete with other actors and "The whole thing is a goddamn meat parade. I don't want any part of it." Scott is magnificent in the role. Although he once claimed that he never felt he fully captured Patton, he was simply being too modest. While it's impossible for anyone who didn't know Patton to fully appreciate how accurate his portrayal was, it's very easy to see that he did capture a rich, complex, outspoken, often infuriating man that history put in the right place at the right time for his skills to be of use.

Scott's Patton is an intelligent, headstrong, massively egotistical man whose dream is "to lead a lot of men in a desperate battle." A military historian and a foul mouthed belligerent of those he deemed malingerers, Scott spoke several languages and was also a poet whose poem, "Through a Glass Darkly" expressed his belief in reincarnation and his feelings about being a warrior.

"So as through a glass, and darkly
The age long strife I see
Where I fought in many guises,
Many names, but always me."

The film covers Patton's World War II years, from his entrance into North Africa where he won an Allied Victory at el Gatar against Rommel's forces, although not Rommel personally, which lead to the rumor that Hitler kept Rommel in Berlin deliberately since he knew he would lose and didn't want his famous general's reputation tarnished. It follows Patton through his invasion of Sicily, where he clashes egos with British Field Marshall Montgomery. It covers his personal humiliation following an incident where he slaps a soldier suffering from nervous exhaustion and berates him for cowardice. When news of this event leaked to the civilian press, Patton was removed from command and shuffled from post to post, partly in order to confuse the Germans. And the final portion of the film shows Patton's triumphant return to command following the Normandy landing when his Third Army cuts a swathe across Europe.

Although I have sometimes complained about the length of movies, I wouldn't begrudge a single minute from Patton's nearly three hour running time. From start to finish I was riveted by this film. The events depicted are fascinating, the performances uniformly superb, the script tight and dramatic and the musical score haunting (once you hear the echoing trumpets that are a constant refrain in the score, you'll never forget them). And at the center of it all, a bigger than life character that you can't help but admire. You may not agree with all of his decisions, since some are motivated by a need for personal glory, and he may only be suited for war and never diplomacy or a life of peace, but in a time of war, there's no doubt he was needed, so long as there was someone to rein him in from time to time. He makes a great bullet, even if you wouldn't want him to be the hand aiming the gun.

The script is credited to Francis Ford Coppola and Edmund H. North, although reportedly the two never actually met until they appeared onstage together to accept the screenplay Oscar; North merely polishing Coppola's script after he'd finished it. Coppola certainly knows (or knew) how to write guy movies, with this and the first two Godfather films. Only two or three women even speak in this film and all of them are simply extras. There are many great lines including the iconic opening speech Patton gives while standing in front of a giant American Flag, although it is actually an amalgam of genuine Patton speeches with the language cleaned up to allow a PG rating (fucking becomes fornicating, for instance).

General Bradley is given credit as a consultant on the film and is portrayed by Karl Malden in the film. I've read some criticism that Bradley helped make himself look better and Patton worse in the process, but I'm not a student enough of either men to attest whether or not this is true, but I can say that Bradley certainly does come off looking good as the unpretentious General with the common touch. As he says in the movie, "There's one big difference between you and me, George. I do this job because I've been trained to do it. You do it because you LOVE it."

A complex character study of a flawed, but fascinating man, Patton is one of the greatest movies ever made and possibly the best War film of all time.

The script is indeed excellent. Coppola would even recycle an idea from it. During the Battle of the Bulge scenes Patton asks the company chaplain to pray for better weather. While Patton recites the prayer in voice-over we see violent images of war, including soldiers being shot, burned and blown to bits. It is a powerful few seconds of film and an idea Coppola would use to even greater effect in The Godfather. And, just as George C. Scott did with Patton, Marlon Brando would famously refuse the Oscar for his role in that movie.

I have to agree with everything Scott wrote. Patton is brilliant in just about every way a movie can be. The scenes of battle are particularly impressive. And remember this was long before the days of CGI effects. Every tank and plane you see onscreen is real. Also adding to the authenticity is the location shooting. Parts of the movie were filmed in Africa, Greece, Italy, Spain and England.

Although this is a serious war drama it also contains a few bits of humor. The German officer’s conversations and speculations about Patton and what his next move will be are one example. As well as the scene near the end where Patton shares a toast with a Russian officer.

George S. Patton Jr. was indeed a complex and fascinating man and one hell of a soldier. His belief in reincarnation adds an unusual layer to his personality. He believed he had lived many lives before - always as a soldier - including serving in the ancient Roman army as well as under Napoleon. He was a well-read student of history. It’s true he would also have made the perfect poster-child for “delusions of grandeur” but he was what was needed for his time and place in history.

George C. Scott gives one of the all-time most indelible portrayals of an actual person in film history. Walter Cronkite, who knew the real Patton, famously remarked that after seeing this movie he wasn’t sure that if he saw the two of them side by side, he would be able to tell which one was the real man.

This isn’t a biopic of the charismatic General. It wisely chooses to focus only on his career during the Second World War. World War II was so vast that no single movie could ever totally capture it. Patton shows us the war as lived by this one singular man. Yes, it runs nearly three hours, but no matter. Sit back, relax and be prepared for one of the greatest war films of all time. 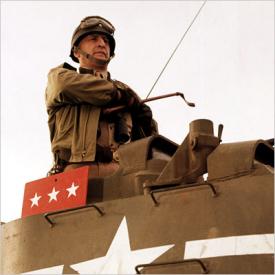 Agreeing with Patrick, George S. Patton Jr. was a fascinating person, the likes we so rarely see today. He was born to a wealthy family with a military history. He was educated at military schools, including West Point. He participated in the 1912 Olympic pentathlon, which requires fencing, shooting and equestrian skills. He first saw action during the 1916-17 Pancho Villa Expedition, which was one of the first times armored weapons (tanks) were used in combat. All of this and more helped to create the image that became a legend. Patton wore riding pants and carried a riding crop for image sake. He wrote poetry. He knew and appreciated history. German officer Oskar Steiger rightfully called him, "A romantic warrior lost in modern times."

As depicted here, Patton is a man with a hard-on for battle. He has a broad smile during the film's first tank battle when he recognizes Rommel's strategy. He turned the battle of Sicily into a contest with Montgomery, caring more about outdoing his British counterpart than his own men. This is not to say that Patton did not respect the men under his command. He simply expected 100 percent effort from them. One scene that always stays with me is when Patton comes across a battle weary American GI sitting next to a tank on a battlefield. The soldier describes how the fighting started with tanks and ended in hand to hand combat. So moved by the man's story and struggle, Patton bends over and paternally kisses the soldier on the forehead.

Patton is filled with stunning visuals. Scott mentioned the famous opening scene, while the story proper contains such memorable images as the soldier by the tank after battle and the soldier being shot in the snow while Patton recites a prayer. Patton is as well filmed as any war movie ever made. I pointed out to my nineteen year old, who constantly brags about the high quality of video game animation, that this film was made without CGI. As Patrick wrote, the tanks and planes are real and it was filmed on location. We will likely never again see a World War II film made with such authenticity.

Interesting to note is Patton's reaction to the frightened soldier in the tent full of wounded men, who are heroes in Patton's eyes, while that man is simply a coward. Anyone who has ever served in the military understands what happens in that scene. All soldiers are scared, period. That soldier was not unique, he was just less capable of hiding it than others. Patton was offended that he was being treated equally in the company of legitimately wounded men. What was Patton supposed to do, give the guy a hug and say, "There, there."? That action is appropriate for an elementary school teacher to a child with a scraped knee, not a General and a soldier under his Command. Civilians reading of that event from the safety and comfort of their stateside home may have thought Patton cold and callous, while I guarantee you men on the front line understood completely. The results of slapping that soldier created negative press for Patton and it is that kind of media scrutiny, which is tenfold today, that will keep us from seeing another leader like Patton.