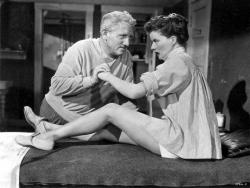 In their seventh movie together Spencer Tracy and Katharine Hepburn play their usual game of opposites attract. This time she's a female athlete, equally adept at both golf and tennis, and he's a shady sports promoter who tries to cash in on her abilities by promoting her as the 'Greatest Female Athlete in the World'.

The only problem is that whenever her condescending fiancé is around (which is whenever she is at a critical moment in a match) she becomes instantly and completely inept at whatever sport she is competing at. Of course very quickly she and the promoter are in love themselves, so what does it matter?

Pat and Mike tries hard to be both an amusing romantic comedy and a statement on feminism as seen through the milieu of sports. Unfortunately it doesn't quite succeed at either. Sure their unique acting chemistry is in full bloom, even if it is without a spark of genuine romance.

And it tries too hard to create a physical passion that just isn't there.  After watching her walk away at one point Mike says to another man, 'Not much meat on her, but what's there is cherce.'  The dialogue never fully conveys why a classy athlete like Pat would ever fall for a two-bit schemer like Mike.

Director George Cukor and writers Ruth Gordon and Garson Kanin (the same team that did the superior Adam's Rib) try a little too hard on this one. Cukor is really out of his element with the sports theme and the writers seem unable to find the right balance between broad comedy and sophisticated romance. At any rate the finished product is uneven and at times downright silly.

The movie is memorable mostly for the famous sports figures of the day that appear in cameos as themselves, including Don Budge and Babe Didrikson Zaharias. The supporting cast also boasts a few famous players as well. Jim Backus, Charles Bronson, Chuck Connors and Charles 'Alfalfa' Switzer all have small roles. Aldo Ray has a few funny moments as Mike's dumb-as-a-post boxer.

Katharine Hepburn was in her mid-forties when she made this movie. She is in incredible physical shape. Watching Pat and Mike it is difficult to believe that she made this one after The African Queen. She runs, golfs and plays tennis like a natural. Spencer Tracy, for his part, was still an amazing actor to watch. He made every scene he ever played seem like it was happening for the first time. It's just too bad that they couldn't come up with a better Pat and Mike story. 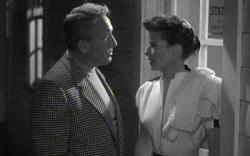 Pat and Mike is not one of Spencer Tracy and Katharine Hepburn's better movies. The writing is not bad. The direction is good. George Cukor was Hepburn's personal favorite.

The problem with Pat and Mike lies in Hepburn's role. First of all, we are to believe that this middle-aged woman is able to play nearly any sport as well as anyone, even those younger than her. She is so amazing that the mere appearance of her fiancé throws off her concentration. It is an annoying contradiction.

The second big flaw is that Hepburn plays too weak a character.  Her career was built on strong roles. Here she plays this amazing athlete who downplays it for her fiancé's benefit. Early in the movie she loses a round of golf on purpose. Later she shows off that she can actually play well.  It is out of character for Hepburn to not be confident, and a contradiction for the role.

As Patrick wrote the chemistry is still there but Hepburn's Pat is just too wimpy. The best scenes are when Tracy and Hepburn verbally spar. However, they have had better fights in far better movies. 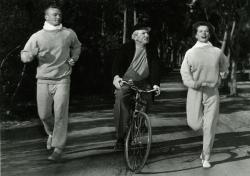 Until reading about this movie, I had no idea that Ruth Gordon, the Academy Award winning actress for Rosemary's Baby, Maude of Harold and Maude, and famous from my childhood as the old mother in Clint Eastwood's Every Which Way But Loose, was also an Academy Award nominated screenwriter. She and her second husband, Garson Kanin, who were close friends of Hepburn and Tracy in real life, wrote the Academy Award nominated script for this movie as well as their earlier Adam's Rib, which also starred Tracy/Hepburn and which was also nominated for an Oscar.

I'd love to say, after all that build-up, that this was an outstanding movie, but I must agree with my brothers that it really isn't. I'm a fan of both the leads, but as Eric said, they both made better movies than this one.

Hepburn was in pretty good shape for a woman in her forties. Not that she does anything particularly spectacular, but she did perform all of the sports action in the movie herself. It was watching her play tennis in real life that gave Gordon and Kanin the idea for the story. She would remain active throughout her life, continuing to play tennis until well into her eighties.

My favorite scene, and one of the funniest, occurs on the tennis court. When Hepburn's Pat is feeling nervous on the court because her fiance is watching, she imagines that her tennis racket has shrunk to almost nothing while her opponent's racket has quadrupled in size, the net is 10 feet high and the ball is enormous. It's the film's funniest visual scene.

Part of the problem with Hepburn and Tracy movies today is that so often they dealt with the differences between the sexes in ways that seem very dated today. Audiences of the day were probably more surprised to see a woman as strong as Hepburn's character was most of the time rather than in the scenes where she shows weakness around her fiance. In any case, I agree with Eric that it's a silly plot point.

Another problem with Hepburn and Tracy together is that despite the fact that they were longtime lovers in real life, there's very little sexual chemistry or tension between them. Perhaps they were just so comfortable around each other that it drains all of the heat out of their relationship.

Despite some amusing moments, the paper thin plot just isn't strong enough to sustain a full length movie. There's enough material for a short story maybe, but I was more than ready for it to reach it's obvious end long before the final act.