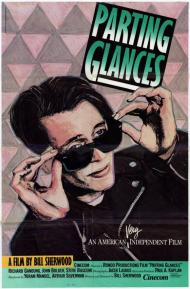 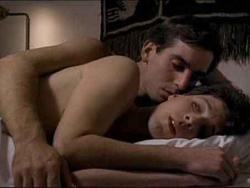 John Bolger (on top) and Richard Ganoung in Parting Glances.

When it was released in early 1986, Parting Glances was a groundbreaking depiction of gay life in an American movie. Writer/director Bill Sherwood gave us this humorous and poignant peek at 24 hours in the life of a gay couple living in Manhattan. Tragically, Sherwood would succumb to AIDS before he had the chance to make another film. Parting Glances represents his sole contribution to Queer Cinema. Fortunately it's quite good.

Robert and Michael have been together for six years. We find them on the eve of a two year separation as Robert prepares to depart for an extended work assignment in Africa. They have dinner with an older husband and wife, and then attend a surprise party for Robert. Michael is also dealing with his feelings towards Nick, with whom he shares an intimate friendship that predates his relationship with Robert. The fact that Nick has AIDS further complicates matters.

One thing that made Parting Glances so groundbreaking, and that keeps it seeming modern, is the nonchalant manner in which Michael and Robert are shown interacting. Throughout the movie they are openly affectionate, and explicitly sexual, with one another in a way that mainstream Hollywood would take another 20 years to catch up to (see photo).

In most movies of that time that featured gay characters, you would have one big moment where the two men kiss. This would be played up for shock value, but then for the duration of the movie there would be no other intimate physical contact of the same sex variety. Like the filmmakers were saying, “well we made our point and got that uncomfortable business out of the way. Now we can settle down and tell the story.” Parting Glances was the first gay movie (at least that I'm aware of) in which male lovers are shown onscreen as naturally as a heterosexual couple would be.

Richard Ganoung and John Bolger (great nephew of Ray Bolger, the Scarecrow in The Wizard of Oz) are both wonderful as Michael and Robert. Like all real life couples their relationship is flawed but they evince a genuine romantic affection for each other. A young Steve Buscemi steals the movie as the cynical Nick, making wryly acerbic observations on life and love. Kathy Kinney is also good as Michael's friend Joan, that throws the farewell party for Robert.

The intelligent script includes some thoughtful commentary on gay life, and love in general. Betty, the older married woman, quotes Proust to Michael saying, “In a relationship there's always one who kisses and one who is kissed.” Meaning that one person invariably loves the other more and therefore has less power in the relationship.

At the party Nick has a conversation with a young guy who describes coming out to his parents at 16, “They freaked. You know the usual bullshit: "How could you choose this kind of lifestyle Peter?" I said, "Hey, guys, it chose me." I mean, your dick knows what it likes. You reach puberty, you don't fucking decide what sex you like. You ask your dick. You say, "Hey, Dick, what do you like?" Okay. Alright. And you go for it.” How true and pithily put.

Parting Glances was shot on location in Manhattan and out on Fire Island. It shows the city as it was in the mid-80s, in all its squalid splendor. This was a less technologically sophisticated time. The 1980s was the last full decade before the internet and cell phones took over the world. Michael still uses a typewriter while considering buying a “word processor”. How quaint.

Bill Sherwood died far too young at the age of 37 in 1990, but at least he left us with these scintillating Parting Glances. 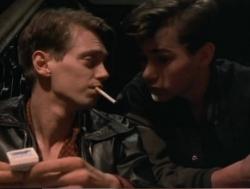 As Patrick is a gay man in a long term committed relationship, and living in New York, I understand why he would relate to and and enjoy Parting Glances.  As I am straight and do not live in New York, I found less in it to enjoy.

In a brief amount of time we meet a couple whose relationship seems to be teetering on the edge of ending.  Robert is about to go away, using the lame excuse that their relationship has become routine.  His lover, Micahel is still in love with and continues to take care of his old boy friend Nick.

Throughout the next 24 hours or so, we see the writing on the wall that they are about to break up, despite Robert telling Michael he will come back to him.  A well traveled friend tells Robert where to meet gay men while in Africa.  Michael meanwhile has a young admirer, Peter, who could not be more obvious if he wore a "I want Michael" t-shirt.  "So the guy that's leaving. That your lover?" Peter says to Michael at the party.  He then adds, "What are you doing tomorrow night?"

Michael still has feelings for Nick and although the movie only hints at it, I believe they were once lovers.  Notice when Michael cuts his finger at Nick's apartment how he panics and quickly washes his cut, asking Nick,  "Have you used that knife lately?"  Michael risks infection to take care of Nick.

Robert on the other hand, has a straight girl friend he used to date in college.  They sneak off during the party to have a heart to heart private conversation.  Michael is clearly perturbed that they share private moments.

The best scene in the entire film is the one on the stairs between Nick and Peter.  Nick was, in his own words, "a twinkie." while Peter currently is one.  Patrick mentioned some of the dialogue from that scene.  It ends with Pater saying, "I wish I could live forever." Nicks says, "That's one thing you can't do."  Peter smiles and says, "I can fucking try."  He then runs down the stairs.  Adam Nathan would make one other movie, Streets of Gold (1986) and appear in the Michael Jackson short film Bad (1987).  He then, for whatever reason, dissapeared entirely from public life.

The film is ripe for a classic Hollywood type ending.  Will Michael and Robert stay together or break up?  It gets resolved but it ends up focusing more on Michael's relationship with Nick.  We know how Nick's story ends but what about Michael and Robert?  That is where the film started and where it should have ended.  Parting Glances is about the subtle nuances of human relationships.  Subtle can be good, but it needed more out bursts and a bigger finish.