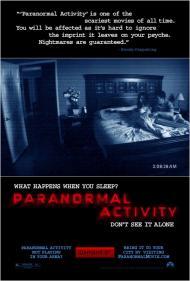 Both of these people are idiots.

I'm willing to cut this movie some slack considering it was made on a shoestring budget. Despite the low cost it manages to provide some genuine creepy moments. However, while it did provoke an emotional response from me; that emotion wasn't fear, it was fucking annoyance. Because of the script (or the story because apparently there wasn't an actual script), these two schmucks are the biggest idiots on the planet, behaving in ways that were so stupid that I couldn't summon the slightest bit of sympathy or empathy for them.

The plot is simple. A young couple (he's a day-trader and she's a student) live in a really nice house. They've been plagued by night noises and since Katie (that's the woman's name) has experienced paranormal phenomenon before, they decide to start video taping their lives to see if they can capture any weirdness on film. Odd things do begin to happen, which is when the the two of them, particularly Micah (that's the man's name) begin to act really, really stupidily.

Director Oren Peli does manage to create some scares and thrills and often with simple things such as the movement of a door, a shadow and especially noises. That's the best thing this movie has going for it.

For such a simple plot though, there are just too many plot holes.

Let's start with the decision to make this movie look as if it was filmed entirely by the two main characters. My first question is why? The opening and closing tries to make it seem as if this really happened, but what's the point of that? Did the filmmakers think the audience will believe this is real? But okay, for the benefit of the doubt, let's say the characters did decide to film themselves. Why are they constantly lugging this camera around? Why not get a bunch of webcams and scatter them around the house so that you can see what's going on everywhere in the house? Why limit yourself to a gigantic camera that you have to lug around with you? And why film silly mundane conversations? And isn't it amazing how the camera is always in the right place at the right time?

I'm assuming because of budget limitations they could only afford the one location. Several times in the movie the characters say or are told that leaving the house won't do any good, but shouldn't they at least try it and see instead of just taking someone's word for it? Also because of the budget (I'm assuming) there's only a few actors in the whole movie. You'd think Katie and Micah are living on a desert island instead of a typical suburban neighborhood. They seek help from one guy but behave as if there's no one else who can possibly help them. They never seek medical help. They never even call the police, not even at the beginning when the noises first start.

If this happened in real life I'm almost certain that the couple would be calling Ghost Hunters or Most Haunted or they would try to coax whatever is haunting their house into a giant Mylar balloon and then set it free so they could turn the whole thing into some sort of reality show. Hell, at the very least they could have posted footage of the weirdness onto YouTube.

And why oh why, after night after night of weirdness happening did both of them continue to fall asleep at the same time in the same room with all the lights off and the door wide open? Why not close and lock the bedroom door? Why not have Micah stay awake while Katie slept?

It's because of this apparent stupidity of the two leads that I began to get annoyed more and more as the movie went along. And it's difficult to enjoy a movie when you're that irritated.

God knows I've seen worse movies that cost millions and millions more than this one did, but after all the buzz and build-up I'd heard, I was expecting more. Too bad I was so disappointed, with the real shame being that with a smarter script and perhaps a shorter time-line, this could really have been something. 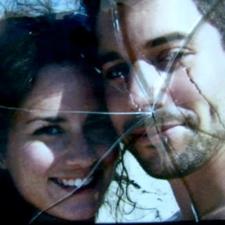 The secret to this film's success is the limited setting and the unknown cast. Had this movie starred Julia Roberts and Clive Owen, it would have been the biggest flop of the year. Only because it is presented as a real couple, in a real situation does it connect at all with audiences. You focus on them as people and not actors.

Whereas that angle works, the movie contradicts itself by having this "real" couple act like no real person would. Like Scott, I was confused that they could sleep in a bed, night after night, after having concrete proof that something extremely creepy was happening in that very room as they slept?

Both characters come very quickly to the idea that a demon actually exists and one is after Kate. If you sincerely believe in demons, as these two do, then you must equally believe in God. Yin and Yang, night and day, if there is one, there is the other. Why did this couple not run to the nearest church? I do not care if they were atheists, once they had proof of the evil spirit in their home, they in essence had proof of a higher being, and as such, proof that God existed. Religion is never mentioned in any form, but the couple study demons on line and in books, and try to use a Ouija board. Maybe they should have looked up a church and did some praying. If anything is going to make someone religious, I think it would be the presence of a demon.

The best this movie has to offer is that subtle little things, like a door moving, is a bit scary. The director does plenty, with very little to work with. The worst of this film is that nothing at all is explained. Why is the demon after Katie? Why does Micah think he can handle it? Why is Katie so often a bitch? Why did audiences think this was such a good film? 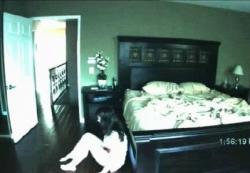 I agree that the unknown cast and the very simple approach to the scares works fairly well. The movie draws you in and the tension keeps building as the eerie events unfold. Unfortunately the ending is a let down. It does maintain a semblance of reality right up to the final shot and not since Blair Witch has a movie gotten so much fright mileage from so little. But ultimately Paranormal Activity is all smoke and mirrors.

The supernatural events in the story are only scary if you believe they are (or at least could) actually happen. The only scene that tries for shock value using gore, is the clip of the demonically possessed girl who chews most of her arm off (although I'm not sure why whoever was taking care of her didn't simply put a restraining mask on her). It seems out of place with the rest of the movie, which is more subtly frightening.

I get Scott's point about them never just up and leaving the house or at least closing the bedroom door, or sleeping in shifts. But then there really isn't that one moment when the unexplained phenomenon turns life threatening enough to make Micah and Katie run fleeing into the streets. And then of course by the end Katie has been possessed and so she convinces Micah to stay even after she has been pulled from bed and dragged down the stairs by some invisible being that leaves bite marks on her skin.

I remember the hype surrounding this movie when it came out. It certainly connected with audiences and has since spawned a couple of sequels. But I predict a short shelf life for Paranormal Activity since it really isn't a very good movie. 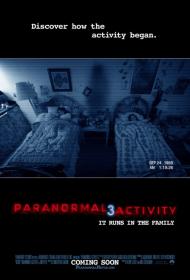