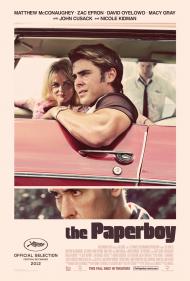 Nicole Kidman and Zac Efron dance in the rain in The Paperboy.

The Paperboy is director Lee Daniels' followup to his critically acclaimed 2009 movie Precious. Like that film this one is based on a fairly recent American novel. Peter Dexter's book of the same name was published in 1995. Also like Precious, the story involves sordid and salacious details and features a central villain as vile as any character ever brought to life on the silver screen. Instead of Harlem in the late 1980s this one takes place in rural Florida in the late 1960s.

Daniels has assembled an impressive cast. Zac Efron, as Jack Jansen, provides the emotional center of the story in the titular role. He's a 20 year old swimmer recently kicked out of college due to a juvenile prank (he emptied the school swimming pool). Back home he spends his days sitting around in his tighty-whities (see photo) drinking beer when he isn't delivering the local newspaper, published by his father (Scott Glenn).

The story is narrated by Macy Gray. She plays Anita, the family maid that raised Jack after his mother ran off when he was five. The relationship between Anita and Jack is beautifully wrought. She is his mother figure but at the same time there is a clearly defined line of demarcation between them due to the fact that she is black and he is white and this is the American South in the 1960s. Both Gray and Efron prove themselves to be fine actors in a cast of veterans.

Matthew McConaughey plays Ward Jansen, Jack's much older brother. He's a journalist in Miami. Ward returns to his hometown to investigate the murder of a local sheriff that happened a few years earlier. Accompanying Ward is his writing partner, a black man named Yardley Acheman (David Oyelowo) who speaks with a British accent. They were hired by a woman named Charlotte Bless (Nicole Kidman). She's a cheap looking blonde who dresses tackily in too tight clothes and has a penchant for exchanging love letters with prison inmates.

She has fallen in love with the most disgusting human being imaginable as portrayed by a bloated, greasy haired John Cusack. He plays Hillary Van Wetter, the man convicted of murdering the sheriff by gutting him with a machete. Hillary is The Paperboy's equivalent to Mo'Nique's Mary Lee Johnston from Precious. No one can accuse Lee Daniels of being drawn to subtle villains. Anyway Charlotte is convinced of her man's innocence which sets the events of the movie in motion. To make a long story short the lives of these six characters are irrevocably intertwined in a plot filled with debauchery and sadism and culminating in a gory climax in a swamp.

Much has been publicized of one scene in particular. Jack quickly develops a crush on Charlotte despite the age difference between them. One day at the beach he gets stung by jellyfish and, as everyone knows, the quickest way to neutralize the toxic poison in jellyfish stings is by covering them with urine. Several girls on the beach offer to pee on Jack but Charlotte intervenes with one of the most unintentionally funny lines I've heard in years. She barks out to the other girls, “If anyone is going to piss on him, it's going to be me!” She then shamelessly proceeds to do so and proves once again that she is one of the most fearless actresses to ever step before the cameras.

The hype from this scene seems to be overshadowing the movie itself. This is a shame because The Paperboy tells a compelling story that entertains while it shocks. Scenes of graphic sex and brutality are interspersed with just enough humor to keep the story from bogging down in its own prurient juices. The entire cast is excellent and Daniels keeps the pace moving quickly. The final 30 minutes brings everything to a thrilling conclusion. Judging The Paperboy purely as entertainment makes it easily Lee Daniels' most successful movie to date. 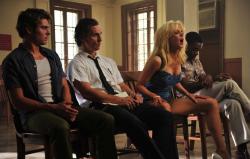 Zac Efron, Matthew McConaughey, Nicole Kidman and David Oyelowo in an awkward moment in The Paperboy

I have long taken notice of Kidman’s acting range but the real surprise here is how Lee Daniels is able to draw great performances from the other cast members. John Cusack has long made a career out of playing sarcastic characters with pessimistic attitudes. Here he is almost unidentifiable as the foul, bigoted criminal.

Like so many actors, Zac Efron became famous because of his looks. Here he gives his all to prove that he is more than just a pretty boy. Although his fans may enjoy the scenes of him in his underwear and bathing suit, he does deliver a decent performance as a temperamental lovelorn southern boy in love with a middle aged woman who seems willing to fuck every man but him.

Matthew McConaughey does a good job as well. At first it seems that this is the usual kind of role that McConaughey does best. He could just as easily be playing any of the other southern characters he has become famous for. That is until we get to the scene in the motel room and we learn of his secret. His is likewise a brave performance.

Not only are the performances good but the dialogue is often a real treat. When Kidman rolls up the car window, so as to not muss her hair, a sweating David Oyelowo asks, “Are you serious? I am sweating like a pregnant nun back here.” Oyelowo and Kidman have the best lines. At one point she tells Efron that she is not going to blow him because, “I am not going to blow a friendship over a stupid little blow job.”

After Efron attacks Oyelowo, Kidman explains that it was because Efron is sexually repressed. An angry Oyelowo yells at Kidman, “Sexually repressed is a 40 year old woman who’s obsessed with prison cock.” She calmly comes back with, “That’s not nice.”

Kidman as Charlotte and Efron as Jack are the center of the film, and everyone else kind of dances around them. They are the connection between all the major players. Jack pining for her while she enjoys his attention, plays out quite realistically. The final part of the film though, loses its way. I never bought that Charlotte would choose to move to the swamp with Hillary. Of all the men she had to choose from she never seemed retarded enough, or lacked enough self-esteem, to make that poor of a decision. Perhaps a less attractive actress should have played the part.

With Precious and The Paperboy, Lee Daniels has shown that he is the kind of film maker that has little use for glamour or romantic notions. He enjoys exposing the uglier side of humanity by focusing on self-destructive characters. He understands that no one lives a cut and dry life. Everyone has different sides to their personalities and often they are things we may not want to see or even know about. 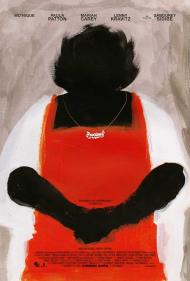 Precious: Based on the Novel Push by Sapphire (2009)
Home | Reviews | Articles |