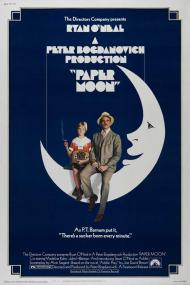 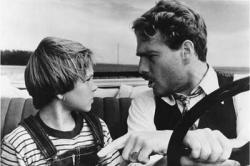 Director, Peter Bogdonavich scored big in 1972 with the comedy What's Up Doc?.  He followed it up with the dramedy, Paper Moon.  He reteamed with Ryan O'Neal, Madeline Kahn and Randy Quaid.  The biggest key casting though, was with then 10 year old Tatum O'Neal, Ryan's real life daughter.

The movie opens with a funeral.  A woman has died leaving her 9 year old daughter, Addie, with no one to care for her.  A man, Moses, whose relationship to the deceased is only implied, stops by the grave to pay respect.  He is not exactly sad, but she must have made some impression that he felt compelled to stop by and place some flowers.  Moses gets talked into taking Addie on a road trip to her aunt's home.

Addie asks Moses, but he denies that he is her father.  Along the way Addie comes to learn that Moses is a con man.  His routine is to sell Bibles to widows, telling them their husband ordered it shortly before they died.  The widows are so touched that they pay whatever price he asks.   Although Moses initially sees Addie as a huge inconvenience, she quickly proves what a great asset to his cons she can be.

Madeline Kahn stole What's Up Doc from Barbra Streisand and she again steals every scene she appears in here.  Trixie Delight is a gold digging whore.  Moses meets her working as a dancer in a traveling carnival.  She and her maid take up with Moses and Addie.  Moses is blinded by lust while Addie sees right through her.  Addie asks the maid, "Imogene, what do you suppose Miss Trixie'd do if somebody offered her $25 to put out."
Imogene, answers, "Ooo Wee! You crazy? For that much money, that woman'd drop her pants down in the middle of the road!"

Trixie however, sees right through Addie as well.  At one point Addie refuses to continue traveling with Trixie.  They have a private conversation where Trixie knocks off the act and says to Addie, "You're going to ruin it for me aren't ya?"  Right she is, as Addie, with the help of Imogene ends up sabotaging their relationship.

Although the film has many laughs, it turns dramatic near the end when Moses and Addie get caught up with some bootleggers and the police.  Then there is of course the moment when they finally arrive at Addie's Aunt's home.

Real life father and daughter Ryan and Tatum have a great rapport.  Often she seems smarter than him.  Their moments together are movie magic.  "I got scruples too, you know. You know what that is? Scruples?"  Moses says angrily to Addie, who answers with just as much attitude, "No, I don't know what it is, but if you got 'em, it's a sure bet they belong to somebody else!" 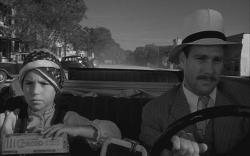 Eric, does Moses get talked into taking Addie with him, or was that his plan all along when he stopped, so that he could get his hands on that $200? Everything he does, apart from his time with Trixie, is designed to get his hands on money. He does nothing without an ulterior motive.

The whole movie is so superbly done that to single out one part of it seems unfair, but I have to single out Tatum O'Neal as Addie. She won the Best Supporting Actress Oscar and remains the youngest Oscar winner (not counting 6 year old Shirley Temple's honorary Oscar in 1935). And it was no gimmicky win. She fully deserved the award, with my only complaint being that she is in reality the leading actress in this movie and not the supporting one. Her performance is the gold standard of child performances. Her Addie is absolutely brilliant. Watch her face after she pulls the trick on Trixie. She knows she succeeded and it had to be done, but she knows how much it's going to hurt Moze. There have been actors with decades of experience who are unable to match the genuine realism and depth she brings to her part.

I agree with you Eric that Kahn is a comic scene stealer and generates laughs during her brief time onscreen, earning an Oscar nomination of her own. The moment she and Addie share on the hillside is perhaps her best scene. It's the only time in the film where she drops her facade. It's when she finally comes clean with Addie that Addie agrees to come down the hill and get back in the car.

The reason this movie works so well is the relationship between Addie and Moze. He's gruff and seems uncaring, while she tries to maintain a tough, grownup facade on the outside, while clearly remaining a young girl on the inside. They show their affection for each other by bickering and arguing and they maintain that attitude right up until the end where instead of sharing a warm reunion, they continue just as before with Addie demanding her $200.

Bogdanovich and his team do a great job with the look of the film. The black and white cinematography (legend has it that Orson Welles gave the director and crew tips on making it look good) suits the story perfectly and I can't imagine it any other way. I mean, I know that the depression wasn't really in black and white, but we picture it that way.

This is a movie that can make you laugh and maybe even a bit misty-eyed. It's a brilliant film and one of my all time favorites.

I agree wholeheartedly with my brothers. Paper Moon is wonderful. It perfectly captures the look and feel of the Great Depression. Black & white old fashioned cars riding along dusty back roads across open plains; the final shot is reminiscent of a Chaplin ending. In fact this movie shares similarities with The Kid.

Tatum O’Neal deserved the Oscar for giving the best performance of her career, especially when you consider that this was her very first role. Not since Jackie Coogan had a child actor had such an impact in a movie. In her hands Addie is a fully fleshed out character right from her first scene. It’s kind of sad that Tatum started at the top and had nowhere to go but down.

Ryan O’Neal is equally appealing although his role is less showy. His Moze is a basically kind-hearted flimflam man. You can see his emotional attachment to Addie and although the movie never states it unequivocally (it isn’t necessary) in my heart he is her father. His reluctance to leave Addie at the end can be read as either proof of his affections for her or simply as him not wanting to break up a moneymaking team. I concur with both Eric and Scott about the brilliance of the relationship between these two; even when it tugs at the heartstrings it is never embarrassingly sentimental.

As for Madeline Kahn, she does indeed run away with every second of screen time in which she appears. She was not only funny as hell but also a very talented actress and the speech she gives to Addie on the hillside is her finest moment. I love how she goes on and on about “Bone Structure.”

P.J. Johnson deserves a mention as Trixie’s maid Imogene. She tosses off some great lines at her employer’s expense, like when she tells Addie (speaking about Trixie) “I tried to push her out of a window in Little Rock once.”

Paper Moon is a nearly perfect movie. Oh and Eric, you forgot John Hillerman. He’s in both this film and What’s Up Doc too.