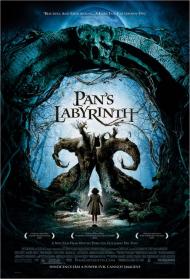 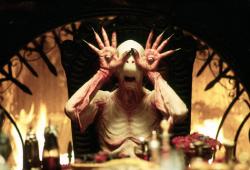 Pan's Labyrinth is one of the best movies of the year and I almost didn't go to see it because its director's (Guillermo del Toro) last two movies were Hellboy and Blade II, both of which were generally pretty awful. Maybe he was just whoring himself for some quick Hollywood cash, but whatever the reason, I can forgive him for those earlier films so long as he occasionally puts out movies like this one.

Ofelia is a young girl moving with her mother to a military outpost in the mountains of Spain in 1944. Her mother, Carmen, is married to an army captain, and they're moving to be near him for the birth of their child. Ofelia's father was a tailor who died during the war.

Upon arriving at the outpost, two things quickly become apparent. The Captain is a sadistic bastard and there is magic in the woods. Ofelia is awakened one night by a large insect who reveals himself to be a fairy. The fairy leads Ofelia through the old stone maze that exists behind the house and down the stairs in the center of it. Awaiting her there is a Pan-like faun, who tells Ofelia that she is the reincarnated spirit of princess of the underworld. Before she can return to her magical kingdom however, she must perform three tasks to prove herself.

In the real world, Ofelia's mother is having difficulties with her pregnancy. The Captain, her husband, informs the doctor in private that if he can only save one or the other, to make sure that it is the baby that he saves. There are also rebels in the woods that the Captain is ruthlessly hunting down. The sister of the one of the rebels is working in the Captain's household and doing her best to keep them informed of the Captain's plans.

The two stories, that of Ofelia on her magical quests, and the story of the rebels fighting the Captain, both build to a single, exciting climax.

The original versions of many of the classic fairy tales were bloody or ended with someone's death. Disney has since cleaned up those old stories and given them all happily ever after endings that weren't there originally. Did you know, for instance, that the wicked step-sisters in Cinderella both have their eyes pecked out by crows at the end? Or that one of them cut their big toe off in an attempt to fit into the glass slipper? This movie is like a fairy tale before Disney got a hold of it. It's bloody and violent and the happiness of its ending isn't guaranteed. Like those original tales this one is aimed at grown-ups.

While the story is interesting and the acting is all first-rate, it is the movie's visuals that truly make it stand out. The fantasy elements are beautiful and frightening at the same time and are unlike anything I've ever seen on film. Even in Hellboy and Blade II, del Toro showed that he had an eye for visuals, but with Pan's Labyrinth he finally has a story that matches his vision. 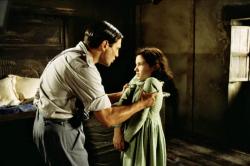 Pan's Labyrinth certainly has a very engrossing story, but the ending, although realistic, is the most unsatisfying conclusion, to a otherwise great movie, that I have ever seen. This little girl spends every waking moment trying to survive in both the real world and the fantasy one. Either place requires her to deal with dangerous beings and scary situations. She suffers greatly yet never gets rewarded for her troubles. Her life just keeps getting worse. Give me the Disneyfication version anytime.

I was lucky enough not to see Hellboy or Blade II but I was already familiar with the talent of Guillermo del Toro from the movie The Devil's Backbone. Like Pan's Labyrinth that movie was set during the Spanish Civil War and it also dealt with supernatural elements. Apparently this is del Toro's niche.

The ending to this movie is sad and bittersweet, but it's far from unsatisfying. Ofelia is a true heroine. Beautiful, brutal, magical and heartbreaking, Pan's Labyrinth is a brilliantly original movie.