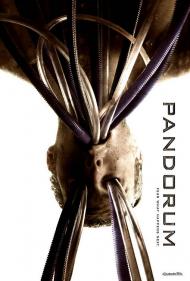 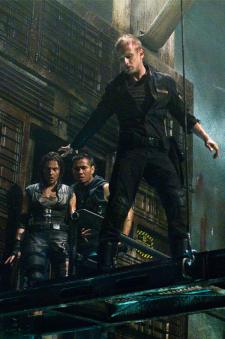 One of the greatest thrills for any movie afficionado is going to see a film they know little about, and have no expectations for, yet thoroughly enjoy. Pandorum looked from the previews like some run-of-the-mill copy of Aliens. Although you could draw a few comparisons, it is its own film.

The movie starts with two crew members, Corporal Bower and Lt Payton, of a very large spaceship awakening from their hyper sleep. They each have some memory loss caused by their hyper sleep, but they know that they are part of a flight crew, and that they were set to be woken up when it was their time to go on duty. They soon discover that all is not right as they cannot find the previous crew, and the ship seems to be having trouble maintaining power.

With a hatch unable to open, Bower sneaks through some ventilation shafts to try to find out what is going on, as well as get to the nuclear reactor to fix it. Payton stays behind manning a computer to help give him directions. Bower quickly learns that the ship is hardly without other living creatures.

The ship is a settlement ship full of humans in hyper sleep. Creatures roam the huge ship feasting on the humans when they come out of hibernation. Bower teams up with a few survivors and does battle with the creatures as he tries to get to the reactor. Meanwhile, Payton finds himself dealing with a flight crew member who may be crazy and the cause of some of the ship's problems.

The movie has some really good moments of intense fear and adrenaline. Foster as Bower creates some nice moments just by his reaction to what is going on around him. Several scenes have him hiding from the creatures as they run past. His expression of panic draws you in, and you feel scared for him. A scene near the end is a bit much as he crawls over some sleeping creatures, but it is engrossing none-the-less. The harshest scene is one where you see a hyper sleep chamber open and a man starts to wake up only to be eaten by the creatures. I think I may have a nightmare from that one.

The ending is a bit of a twist and wholly satisfying. It is a true "Wow!" moment. Pandorum is a great science fiction film. 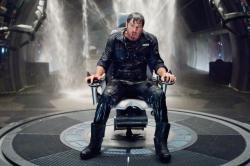 You could draw comparisons to not only Alien, but to several other movies. It also reminded me of, among others, The Descent, Die Hard, and even an old episode of Doctor Who called "The Ark in Space". In fact, the plot of this movie is virtually a remake of that episode only with much better special effects. Despite the feeling of having seen most of this before, like Eric, I ended up enjoying it anyway.

The mystery as to what is truly happening onboard the ship is one of the strongest plot points. It adds a nice layer to the action, which is helpful since there isn't really much character development. The Twilight Zone reveal at the movie's ending is satisfactorily done and does leave room for a sequel. Reportedly, this was to be the start of a trilogy, but given its lackluster box office performance, that now seems doubtful.

Ben Foster does do a good job. He always reminds me of a low rent Ryan Gosling. We don't learn much about him, but he's got enough charisma to keep us on his side. Dennis Quaid is also good and he brings a commanding presence to the part.

Because you mentioned the scene where the awakening passenger is eaten as soon as he wakes up as being so shocking, Eric, I was expecting something horrifying, but it was actually fairly mild. There are some bloody scenes, but I kept waiting for that one big shocking moment, but there really isn't one.

This is definitely a B-movie, but it's still plenty enjoyable. Who knows, maybe with enough word of mouth it could build up a big enough following on DVD to eventually get that sequel made after all. I know I'd go to see it.

Would you trust this child?

Pandorum starts and finishes strong, although it falters a bit in the middle section. The premise is intriguing if unoriginal. The reason the set-up of astronauts waking up from hyper-sleep has been used so often in various incarnations is because it works as a great way to quickly draw in an audience. In addition to the movies my brothers mentioned this device was used at least as far back as the original Planet of the Apes in 1968.

The mystery of the spaceship Elysium and its inhabitants unfolds in a mostly satisfactory manner. I did feel that the interior spaceship sets are a bit on the generic side and the constantly subdued lighting gets to be a bit monotonous after a while. Although to be fair, these things add to the sense of claustrophobia the movie is going for. The ending is good.

I agree with my brothers that Ben Foster is solid as Bower. He does bear a passing resemblance to Ryan Gosling, only prettier and less masculine looking. Dennis Quad brings a bit of gravitas to his role and he is in great shape for a man his age. But I have never thought of him as a very good actor and this movie did nothing to change my mind.

There are some decent scary moments even if they are nearly all derivative of other movies. The scene with the child mutant is a good example (see photo). It still manages to be shocking even though it shouldn't come as a surprise to anyone who's seen many sci/fi or horror movies.

I agree Scott. This is a mostly enjoyable B-movie. It doesn't break any new ground but it accomplishes what it set out to do. Namely provide a bit of pure movie entertainment. Pandorum never takes itself too seriously and it offers a fresh variation on a tried and true formula. Now am I the only one that found the poster to be oddly confusing? What does it have to do with the movie?