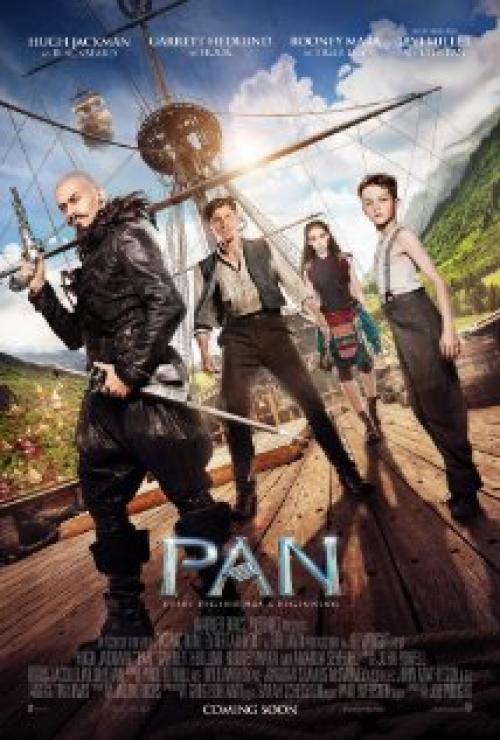 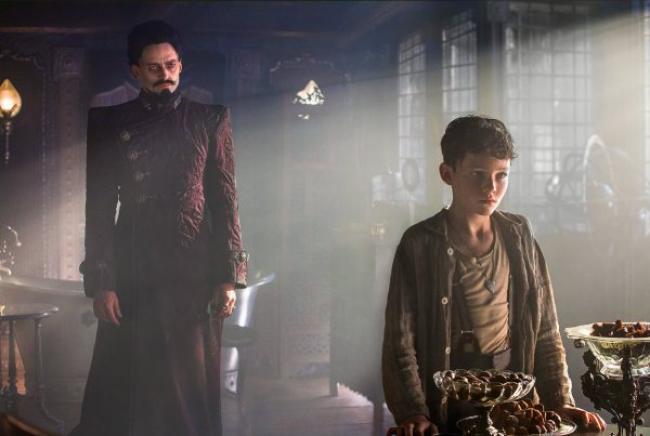 Pan isn't just a prequel to Peter Pan, but a full-on reboot. It creates a backstory for several characters, including Peter himself, that has never been written before. Sadly, it adds little to the characters or the myth of Peter Pan. It looks good, with lots of color and action, but ultimately that's all it is.

Despite its prequel premise, the film starts during World War II, while the original story was set 40 years earlier in Edwardian London. Peter is an orphan living in a cruelly run orphanage (is there any other kind in movies?) where he dreams of his mother returning to him. One night he, along with the other orphans, are kidnapped by pirates in a flying ship. They are taken to Neverland, where they are put to work mining for fairy dust under the order of the pirate Blackbeard (Jackman), who uses the stuff to make himself immortal. Peter meets a young man named Hook, who becomes his friend and I guess eventually his enemy for reasons which aren't specified here. Peter then learns that he is apparently the chosen one who it is prophesied will kill Blackbeard and free Neverland from his tyranny. This leads to Peter and Hook's escape, their meeting with Tiger Lily, and an action packed climax in the fairy kingdom.

There's no question the film looks good. I even bothered to see it in 3-D, which I almost never do these days, and it did help. The brightly colored action helps distract the audience from the fact that there's very little original or deep going on in the plot. Some of the action sequences are fun to watch, but there's never a real sense of danger or suspense. It's like a big fluffy ball of cotton candy and it dissolves just as quickly from your mind as that sugary stuff does in your mouth.

Levi Miller is fine as Peter, without really bringing much special to the part. However, this is more to do with the generic way the character is written than any fault of the boy's. Jackman is given a bad wig and some atrocious costumes as Blackbeard. He comes off more campy than cruel. Garrett Hedlund puts on a very strange accent as Hook that is so offputting that it's constantly distracting whenever he opens his mouth. Rooney Mara drew some ire from the internet for being cast as the Native American Tiger Lily character, but given that her tribe seems to be made up of the peoples of the world, there's not really that much to be upset about,except perhaps the lack of Native Americans in Hollywood in general.

The real problem is the script. It feels very unoriginal, and besides the character's names, unconnected to the original story. It's just another "chosen one" storyline where a young boy learns that he is destined to defeat the villain who killed his parents. There's also a dubious decision by either the writer or director Joe Wright to include a few anachronistic songs sung by the characters, including Nirvana's "Entertain Us". The story of Peter Pan is the story of a boy who refuses to grow-up, but Peter here seems like quite a responsible young man who is destined for great things. Of course in today's modern world where not growing up and behaving like a kid has become the normal way to portray male characters in films, perhaps the Peter Pan complex has become the norm.

There are worse films to see than Pan. It provides plenty of eye candy at least, but zero nutrition for the brain. 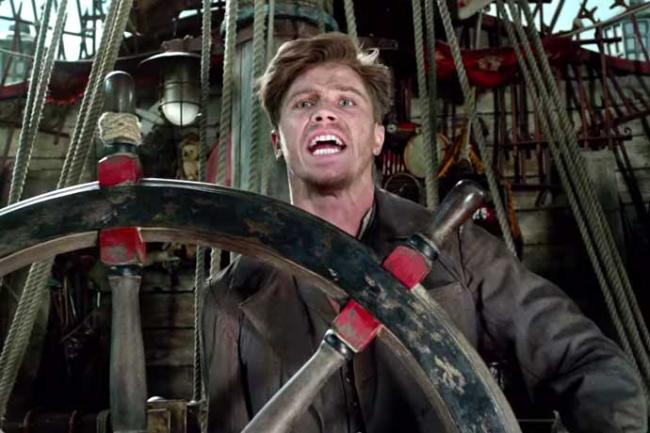 Garrett Hedlund as Hook in Pan

Although some of the visuals are fascinating and the pace picks up as the movie moves along, Pan completely missed the point and tone of its source material. Scott referred to this Peter Pan as acting responsible, which is an attribute we normally do not associate with a child who refuses to grow up. The joy of the Peter Pan character is that he is a child who has nothing to do all day but play, meaning he can visit mermaids, Indians and fight pirates. Most of all, he can fly. He is the epitome of a carefree childhood. He has no adults to strap him with rules or chores. He has no schedule to follow or any fear of parental reprisals if he misbehaves.

Here we meet Peter as an orphan who is emotionally burdened by the hope of his mother returning to claim him. The nuns, who run the orphanage, are cruel beyond understanding. Peter escapes their tyranny and goes on a fantastic journey, in search of his mother, where he meets all of the significant characters we all know. Throughout the story, we see Peter as a depressed, desperate child moving from one event to the next. He has little confidence and if not for the help of the adult Tiger Lily and Hook, would have failed at accomplishing anything, and that is the film's biggest misstep.

Peter Pan does not need adult supervision and or help, period. If you argue that this is his origin and by the end of the film, he is acting joyously carefree then you still miss the point, because what you would be arguing is that Peter grew from this film's experiences and let me remind you that growing up is not part of the Peter Pan legend. In fact, it is pretty much the entire lesson to take from it. With growing up comes responsibility and Peter has no interest in such things. Peter is just the flying alpha male in the group of lost boys who do not care if they get dirty or sleep all day or run amuck without anyone to answer to.

Garrett Hedlund bares a closer resemblance here to Indiana Jones than what we think is Captain Hook. Here Hook was apparently one of the first orphan boys brought to Neverland to dig for fairy dust. He is now an adult but still works in the mines until he and Peter escape. He is immediately attracted to Tiger Lilly and turned on by the topless mermaids. He is so nervous about the female sex that he pulls his hand away when his accidentally touches Tiger Lilly's. At one point, he tells Tiger Lilly he thinks he is flirting with her but is not sure. My question is how does a guy who has spent his entire adult life and most of his youth with other boys and adult men even know what the word flirting is? This movie should have told his story instead of Peter's.

Although sex is kept in rated "G" content, it is never even a suggestion in the original story. Here, Peter learns that his father was a fairy who turned himself human, even though he knew he would die after only one day, just so he could have sex with Peter's mother. It is explained to Peter that he was born of their love. Any hoo, that is another adult issue that Peter Pan should not have to have on his mind. "My Dad was so horny that he turned himself into a human, knowing full well that he could only live for a single day in human form. He died just to create me." What person wants to live with that guilt?

The movie begins with Peter narrating, "I am going to tell you a story about a boy who would never grow up..." Then the movie begins and contradicts that statement. It ends with Peter asking his best bud, Hook, "We'll always be friends, Hook. Won't we?" Who answers with a smile, "Always. What could possibly go wrong?" Well, I will tell you. Somehow they will each decide that they no longer like each other, which means they will experience or learn something that changes their opinion of the other, which is a huge part of the growing experience. Wait, didn't we already discuss how that is not part of the Peter Pan story? 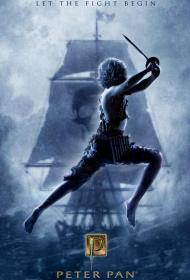 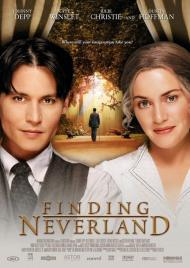