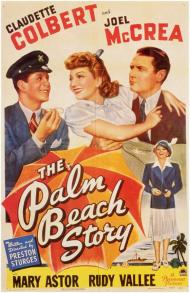 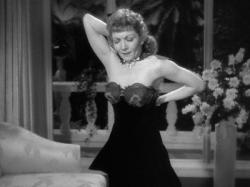 Of the four most celebrated comedies by Preston Sturges The Palm Beach Story is perhaps the funniest. The Lady Eve, Sullivan's Travels and The Miracle of Morgan's Creek are more well known but none of them matches the outright hilarity of The Palm Beach Story. What is truly remarkable is that one man wrote and directed these four classic comedies - all in a row in a three-year period. All of them contain the classic combination of lowbrow slapstick with sophisticated sexual innuendo that was the zany director/writer's trademark.

Claudette Colbert stars as Gerry Jeffers a discontented housewife who longs for the finer things in life that her financially unsuccessful inventor husband Tom (Joel McCrea) is unable to give her. She convinces herself that she no longer loves him and that she is standing in the way of his career. She also assumes that once she is free she will be able to help him out using financial assistance from rich men she can use her feminine wiles over (you see Tom has plans to build the world's first elevated airport that will be stretched like a net over a city). She gets on a train for Palm Beach to get the divorce and to hopefully meet rich unattached men. The husband pursues her to Florida determined to win her back.

The moral dilemma of this situation is typical of Sturges. Sexually his movies are very adult and his dialogue is filled with double entendres.

On the train she runs into the inebriated members of the 'Ale and Quail Club', a horny group of old rich guys. She eventually hides out from the overly enthusiastic millionaires but is not above letting them pay for her train ticket and proclaiming her their official 'mascot'. She then meets John D. Hackensacker III (Rudy Vallee). He is one of the richest men in the world and he quickly falls for her beauty. Upon arriving in Florida they are met by John's man hungry sister, The Princess Centimillia (Mary Astor) and are soon joined by Tom whom Gerry introduces as her brother. So the estranged couple winds up working out their problems while being relentlessly pursued by the millionaire and the princess who has set her sites on Tom. Chaos of the funniest order ensues right up to the happy ending.

William Demarest (better known as Uncle Charley on the sitcom 'My Three Sons') and silent movie comic Chester Conklin appear in small roles as members of the 'Ale and Quail Club'.

Mary Astor gets the movies most memorable line when she states matter of factly that 'Nothing is permanent in this world except Roosevelt, dear.'

My one point of contention with Preston Sturges is his penchant for racist stereotyping. In nearly all his movies a black character is forced into the wide-eyed Stepin Fetchit mode. It's too bad because these cringe inducing moments mar what are otherwise nearly flawless comedies.