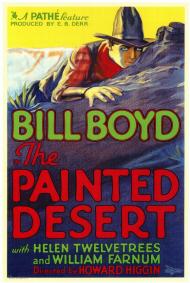 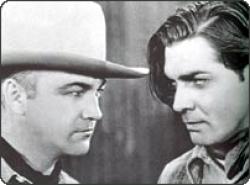 William Boyd and Clark Gable in The Painted Desert.

The Painted Desert is note worthy only because it is Clark Gables first talkie. He made several silent films in the 1920's, but this was the first time movie audiences heard his, now, familiar voice. His part is, unfortunately small.

Cowboy friends Jeff and Cash come across a baby boy in the back of a deserted covered wagon. They take the boy but soon start arguing over what to name him and who is better suited to be his father. Cash ends up taking him, causing a life long riff between them. Years later, the baby, now known as Bill, is grown up and working with his father on his cattle ranch. Jeff lives nearby with his grown daughter, Mary Ellen, from a wife who is long dead. Jeff and Cash are still feuding because Jeff owns the closest watering hole that Cash's cattle always want to use. Bill discovers that there is also gold on Jeff's property. When he tells his "dad" about it he kicks him out. He goes to Jeff's place where they start a mining venture which leads to more feuding with Cash. Meanwhile, a lonesome cowboy, Gable, shows up at Jeff's place and makes friends with him, and eyes at his daughter.

The movie has some uneven dialogue. Some lines are funny. When the men first find the baby they argue over what they have that he can eat. "Aw, you don't know nothin'. There's oatmeal gruel and a mite of bacon grease'll see him through." Jeff says after Cash points out that he's too little to chew jerky. Some lines are so dramatic that they're funny, "Well, Dad, if they think they're gonna water cattle here tonight, here's two Winchesters who'll say they ain't!" Mary Ellen assures her dad while hold her rifle.

The problem with this movie really is not the lines so much as how badly they are delivered. This movie contains some of the worst acting I have ever had the misfortune to watch. It is actually painful to watch the actor who plays Bill deliver his lines. Whoever put this guy in front of a camera was blind. No wonder Gable went on to become a star. He is the only guy on the screen who is convincing. He should have had the starring role. 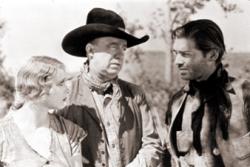 Yeah the acting is pretty amateurish in this early talking Western. Other than Gable the main characters are all rather stiff and lifeless on screen. The exception is in the smaller parts. Charles Sellon and Edmund Breese give colorful turns as an old drunk and a judge respectively. The plot is pretty slight and the story involves more talking than action, still I think I enjoyed it more than you did Eric.  I found myself rooting for Cash and Jeff to make up anyway.

One impressive aspect though is the fact that they shot it on location in Arizona at the actual Painted Desert, the Petrified Forest National Park and Dinosaur Canyon. This must have been technically pretty tricky with the primitive microphones and recording system then in use. A mishap with dynamite nearly put Boyd and Gable in the hospital from falling rocks.

After a few bit parts in silent movies this was Gable’s big break in Hollywood. He had just failed his screen test with MGM and was offered this consolation role from Pathe. He gets a few good scenes. His best moment comes when he defiantly admits his guilt to Bill in front of a saloon full of cowboys. This scene alone hints at what’s to come. Boy did he have a fast learning curve. Within 5 years Gable would be the undisputed King of Hollywood; owner of a Best Actor Oscar and sitting on the top of the box office heap.

Eric, the guy who played Bill (William Boyd) would also go on to a hugely successful career in Hollywood. He had made his movie debut playing a naval officer opposite Gloria Swanson in Cecil B. DeMille's Why Change Your Wife back in 1920. The part that would make him a household name was Hopalong Cassidy, which he played in many films between 1935 and 1951 before transitioning the character to the small screen where his popularity grew even bigger. Hopefully he learned to deliver his lines a bit more naturally.

The Painted Desert is a quickie Western that, as Eric said, is really only remembered for being Clark Gable’s first talkie. 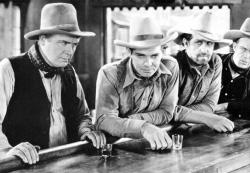 Clark Gable in The Painted Desert.

Patrick, I don't know how you found it within yourself to actually care whether or not Cash and Jeff made up by the time this movie ended. I was so bored stiff that I wouldn't have cared if they'd either shot each other or moved in together in a sort of Brokeback Desert moment.

At just an hour and fifteen minutes, you would think the story would just fly by, but instead it seems to last twice as long. The pacing is so incredibly slow that the plot, what little there is of it, creeps along at a snail's pace.

I have to agree with both of you that the acting is atrocious. It feels completely amateurish, almost like somebody got their two kindly old uncles to act out a Western. William Boyd may have gone onto better things, but he certainly shows no evidence of future success in this part. I agree with you Eric that he's painful to watch.

Patrick, you mention that it was filmed on location, but the director almost never takes advantage of that fact. There are some long shots of the desert, but too often it could have been filmed anywhere there was sand.

Clark Gable does breathe a bit of life into the proceedings, but as you mention Eric, he has such a small part that there's not much even he can do to liven things up. Reportedly, he received enough fan mail for this small part to raise awareness of himself as an actor, moving his career up a notch on the ladder of stardom, and using the exposure from this part to snag that MGM contract after all.

Clearly it is only the presence of Gable that marks this movie in anyway. Were it not for him, it would have long been forgotten. God knows this creaky old horse opera isn't worth remembering for any other reason.