Mark Wahlberg and Dwayne Johnson in Pain and Gain.

Pain and Gain is based on the true and rather bizarre story of the Sun Gym Gang, a group of bodybuilders who fancied themselves criminal masterminds. As with all Hollywood "true stories", this one pumps up the truth somewhat, but enough of it is accurate to prove the old adage that sometimes truth is indeed stranger than fiction.

Taking a break from his usual, explosive, summer blockbusters, Michael Bay directs this dark comedy with a great deal of energy. As is typical with him, the film runs longer than it needs to, but still remains fairly entertaining throughout its overly long running time. It's easily the most entertaining movie Bay has put out in years, possibly ever.

Mark Wahlberg stars as Daniel Lugo, a bodybuilder in Miami with ambitions as big as his muscles and far bigger than his brain. He hatches a get rich quick scheme and persuades two of his fellow bodybuilders to go along with it. His plan involves kidnapping despicable businessman Victor Kershaw, holding him prisoner and torturing him until he signs over all of his assets. Naturally, or there probably wouldn't have been a movie made about it, things don't go exactly according to plan. Lugo and his associates have just enough brains between the three of them to come up with a plan, but without being able to see it through to the end.

The film is played as a comedy, but it's definitely a dark one. Despite their stupidity, which almost lends them a certain charm, at least at the beginning, these guys are kidnappers who eventually turn into murderers. To enjoy it, you need to be able to laugh when body parts are used as the punchline of a joke. It only becomes unsettling when you stop and realize that these were real murders that were committed. Some of their worst atrocities have been kept out of the film to enable the audience to keep watching. For instance, the real Kershaw has testified to being sadistically burned and tortured while his kidnappers laughed, whereas here in the film the characters are played as if they're reluctant to harm him, at least at first.

Dwayne Johnson and Anthony Mackie play Lugo's henchmen. Mackie plays Adrian, a bodybuilder who has become impotent due to the steroids he's been taking and who ends up marrying the nurse who treats him for it. Johnson, as Paul, is a scene stealer. He's an ex-con, born again Christian, cokehead who ends up with a Russian stripper as a girlfriend who thinks that he's a CIA agent. Paul is both the dumbest member of the group and the only one to have anything like a conscience regarding their activities.

Tony Shaloub is also quite good as Victor Kershaw. He plays him as a man so unlikable that it's easy to forget that he's the victim. Even the police find him so repulsive that they are reluctant to listen to his tale of kidnapping and attempted murder.

At times uneven and definitely running out of steam by the film's final 30 minutes, Pain and Gain is still fairly entertaining. Watching these criminals go deeper and deeper in over their heads is like watching a train wreck. You almost can't look away until you've seen how it all turns out. 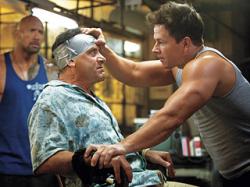 As we are told, not once, but twice during the movie, Pain & Gain is based on a true story. As Scott wrote, some license was taken. The most noticeable change for me is that the real bodybuilders and initial victim were all Latin while the actors are clearly not.

The body builders were of Puerto Rican and Cuban descent while the initial victim was from Argentina. Mark Wahlberg is half Swedish and half Irish. Anthony Mackie is an African American. Dwayne Johnson’s father is African Canadian and his mother is Samoan. Tony Shalhoub’s parents are both Lebanese. A report came out just two months ago stating that California now has as many Latino citizens as Caucasian. What a shame none of them have ever considered acting.

Also as Scott wrote, the three inept, yet brutal kidnappers have a certain amount of charm. Johnson’s role as Doyle is an amalgam of three real people and is played mostly for laughs. After an attempted escape by Kershaw, Doyle slugs him to the ground and says to him, “Why'd you make me do that to you, Victor? I have responsibilities! Jesus Christ himself has blessed me with many gifts. One of them is knocking someone the fuck out!” It is intended to be funny but the only time I came close to laughing is when Doyle says to Lugo, “I can NOT kill!” to which Lugo hugs Doyle and says reassuringly, “Duly noted! Look, I promise when this is over, we'll all go camping, OK?”

Doorbal in real life was noted to be the most psychotic, yet here he is portrayed merely as Lugo’s mild follower. His impotence is played for laughs, “I'm a man who just got married and his penis don't work.” The film likewise intended us to find humor in his efforts to remove the blood from his home after dismembering two victims.

This kind of portrayal outraged family and friends of the actual victims as they felt it in some way created a certain amount of sympathy for the killers. Michael Bay was clearly trying to make us laugh at these idiots’ efforts and therefore I see their point. We do not actually want them to get away with murder, but we are not overly encouraged to root for their capture either.

So I return to the racial issue. Did the film makers purposely hire non-Hispanics to make them more likable? Would we have felt anything different towards them had they been played by Latino actors? Is Anthony Mackie anymore of a household name than Michael Pena? If you are going to mention twice in a film that it is based on a true story, you may want to get a few things right, such as the casting.

The three lead actors are charming and have a potent comic chemistry together, but given the fact that this was based on a true story it's definitely in poor taste. The script is darkly funny but I'm not sure I'd want audiences laughing at relatives of mine that were murder victims. Considering how much of the actual events were either changed or fabricated for the movie anyway, it makes little sense to attempt to pass it off as a true story. I guess they figured audiences wouldn't buy it otherwise, but since a lot of it never happened, or else happened differently than it's portrayed here, the fact that they stress the true angle aspect so much is quite exploitative.

I agree that Pain & Gain starts off strong but loses steam along the way. Michael Bay needs to learn the same lesson Peter Jackson needs – the less is more concept of film-making. Pain & Gain sticks around long past its expiration date. And these characters are such scumbuckets that it's asking a lot from an audience to want to spend two solid hours in their company. Ed Harris plays about the only likable person in the movie and he doesn't even show up till the halfway point.

The role of a dimwitted but eternally optimistic bodybuilder with huge ambitions and questionable morals was a role Mark Wahlberg was born to play. Who else could deliver a line like, “I watched a lot of movies Paul, I know what I'm doing!” with a straight face while discussing a kidnapping plot and make it sound believable? Anthony Mackie gets his share of the laughs with his erectile dysfunction problems, although as Eric pointed out, his character was altered the most from real life. Like Scott I thought Dwayne Johnson was a real scene stealer as the incredibly dumb but good-intentioned Paul. He has come a long way since his days as the Scorpion King.

If they had changed the identities of all involved (which would have rendered the ethnicity of the cast moot) and dropped the true story angle, and if Michael Bay could have edited 20 minutes from the finished film, then Pain & Gain might have been something special - namely a darkly funny little crime-comedy with a quotable script. One thing the movie doesn't need is all the voice-over narration provided by so many different characters. The Ed Harris character should have been the one telling the story so that the audience had someone to identify with right from the jump and continuing throughout all the carnage and chaos to come. Nice try anyway Michael Bay.