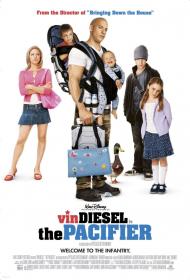 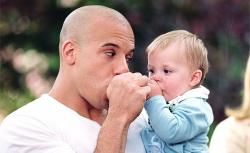 A family movie is simply a movie that is friendly to the entire family. Anyone can watch it without being offended. The Pacifier is such a film. There is no swearing or blood to be found. A killing happens off screen and the only romantic smooching is definitely G rated. That is all fine and dandy except, with all this family friendly plot comes little to no tension.

Vin Diesel plays a US Navy Seal who is assigned to protect the children of a deceased scientist. It doesn't really matter that a safe house or a little relocation would have worked better. This movie is just about putting a muscle bound macho man in awkward, and supposedly, funny situations.

The children are all adorable and belligerent. Of course he makes like Mary Poppins and eventually turns them all around. Speaking of Mary Poppins, The Pacifier is practically a nod to Julie Andrews. Not only is Vin Diesel playing a nanny, but one of the children acts in a production of The Sound of Music.

A little action slips in here and there, but this movie prefers juvenile jokes to judo chops. Many soiled diaper jokes abound. My favorite action sequence is when Vin Diesel is literally tackling the babysitter, Carol Kane, trying to keep her from leaving. The best joke is when the little girl asks Vin Diesel about his boobs, and if hers will be as big as his when she grows up.

The Pacifier hints at a romance between Vin Diesel and The children's principal. It should have pursued that plot more. Instead we have Vin Diesel doing the Peter Panda dance. Don't ask. The Pacifier has a few funny moments, some action, and a bit of romance, but it never fully succeeds at anything. 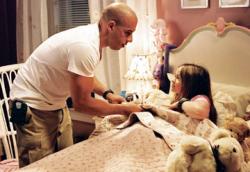 Eric glosses over the plot point that it would have been smarter to relocate the children, but I just couldn't get past that. I know that the whole point of the movie is just to get Diesel into the house alone with the children, but couldn't the writers have come up with a better way of doing that? As soon as the babysitter quits, why doesn't he call in for help? And why is he alone on this mission anyway? Ok, so the 'surprise' ending kind of explains why a certain person wanted him to be alone in the house, but why wouldn't Diesel's character at least call for help?

I shouldn't complain about plot holes when there isn't really a plot at all; it's just a series of skits that put Diesel into awkward situations, some of which work and some which don't. And they also get old really quickly. And as Eric hinted, watching Vin Diesel perform the Panda dance is one of the most embarrassing, cringe-inducing scenes ever put on film.

Unlike Ice Cube and Tommy Lee Jones, both of whom have made movies similar to this recently, I've never understood the charm of Vin Diesel. He's in great physical shape and does action scenes well, but beyond that, I don't see anything about him that warrants his being a star. He's the Steven Seagal of his generation, only in better shape.

I will admit that the children in the audience when I saw this movie seemed to really love it. Instead of a Family Film, as Eric called it, perhaps a more apt term would be a Children's Film.