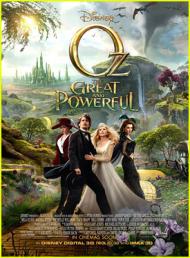 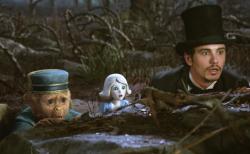 Finley, China Girl and the Wizard in Oz the Great and Powerful.

If you think about it, most fairy tales are of European origin. America really has just one great fairy tale and that is The Wonderful Wizard of Oz written by L. Frank Baum and first published in 1900. Between 1904 and 1919 he wrote a total of 13 sequels to the original Oz book. He also wrote and produced several stage productions and there were several silent movie adaptations of his Oz stories. Years before MGM's 1939 masterpiece, which is said to have been seen by more humans than any other movie ever made, several generations of children had grown up reading Baum's stories.

Over the decades since 1939, several attempts have been made to recapture the magic of this iconic movie, but to no avail. A 1974 animated movie starring the voice of Liza Minnelli as Dorothy flopped, as did Disney's 1985 attempt at a sequel called Return to Oz . It has now been 74 years since Judy Garland first sang about going over that rainbow and this time Disney has come up with a new plan. They decided to go the George Lucas route by making a prequel, showing how the Wizard ended up in Oz in the first place.

The comparison to Star Wars is apt. In both cases the prequel(s) utilize modern CGI to reproduce things that were created the old-fashioned way in the original movie(s). This Oz is colorful and imaginative. Personally the landscape looks a bit more Seussian than I ever pictured it, but that's a minor quibble. Overall I think they've done a splendid job of re-imagining Baum's fairy land.

And though they do incorporate a few touches from the book, such as the china doll character and the fact that Glinda is from the South and not the North, it has more overt homages to the 1939 movie than anything else. Both movies begin in sepia tone before switching to color. This movie even goes so far as to change aspect ratios as well, from the traditional square shape to the rectangle of widescreen. The image of the Yellow Brick Road is copied as is the design of The Emerald City, especially the Wizard's throne room. The Munchkins even sing one song. Glinda travels by bubble. The Wicked Witch of the West (before her transformation) cries and her tears leave burn marks, foreshadowing her weakness to water. There are subtle reminders of the lion and the scarecrow (I didn't see one for the Tin Man), as well as several of the famous horses-of-a-different-color. Another similarity is the fact that several actors play characters in Kansas and in Oz.

According to director Sam Raimi, the film takes place 20 years before the events of the 1900 book, so why then is it set in 1905? I'm sure this detail won't bother most people but it bugs me. The 1939 movie wasn't supposed to take place in 1939, it was set at the time of the original book, 1900. Therefore this movie should be set in 1880. The Kansas scenes do incorporate a few homages to Baum such as the name of the circus Oz works for, “Baum Brothers Circus” and the first name of his assistant is Frank.

James Franco got the part of the Wizard after both Robert Downey Jr. and Johnny Depp turned it down. He does the role justice. He plays it with a sly wink to the audience at all times. Yes I'm a fraud, he seems to be saying, but I'm so damn charming being one that is doesn't matter. And of course he grows as a man over the course of the adventure, but if you think about where his story has to go it makes sense that he would be a sly huckster.

The actresses playing the witches don't fare quite as well. Of the 3, Rachel Weisz is the best as Evanora. She plays to the rafters and seems to relish being evil. Michelle Williams makes for a bland Glinda the Good. She doesn't even try to imitate Billie Burke's speaking voice (maybe Warner Bros. owns that too?). Mila Kunis has the trickier role as Theodora. Her character seems the most contrived of the witches and her fate isn't entirely satisfactory.

The new characters steal the movie. Finley the Flying Monkey and China Girl are both real crowd-pleasers. They bring the movie to life and give the kiddies characters to root for, laugh at, and identify with. Oz the Great and Powerful was shot at Raleigh Studios in Pontiac, Michigan using 3D cameras. I detest this technology. I saw it in good old 2D, so I cannot comment on how well it was done.

I've been obsessed with The Wizard of Oz all my life. I've seen the movie easily more than 30 times.  I've read all the Baum books more than once, the first one at least 15 times.  I therefore experienced a bit of trepidation before seeing this movie. How could it possibly live up to my expectations? Well of course it couldn't. That would be impossible. But at the same time it was only slightly disappointing and also quite entertaining. It is certainly flawed but it does somehow -against all odds- recapture at least some of the unique magic of the 1939 classic. I think we've begun a new chapter in the legacy of L. Frank Baum's American Fairy Tale. 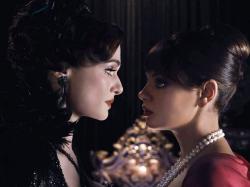 I know what I am thinking, how about you?

I read the The Wizard of Oz once as a child and of course saw the film many times over the years. Like Patrick, I had little expectation for this prequel. I wondered how they could expand on one of the most classic films of all time without looking ridiculous? Well, they did it.

Starting the movie in black and white, as they did in the 1939 classic, and then showing Oz in color is an amazingly simple way to demonstrate what a fantastic world it is. Those first few moments of Franco in the balloon as it floats across the sky and then down the waterfall are some of the best uses of CGI, 3D animation I have ever enjoyed. The rest of the film follows suit with one breathtaking animated scene after another.

Speaking of Franco, I liked his performance but did not love it. Patrick, wrote about the other choices for the role, and although we will likely never know for sure, I think Robert Downey JR would have been the perfect casting choice for Oscar Diggs. This version of Oscar/Oz is more of a Barney Stinson than the harmless, jolly old fat man from the 1939 film. At the beginning of the movie we see that Oscar has a scam for seducing women. Whereas Franco is able to get the audience to like him in spite of his lies to women, Downey JR, and for that matter Neil Patrick Harris, have the type of playful charm that can make them likable because they lie to women for affection.

Oscar Diggs is a man who starts out wanting fame. "I don't want to be a good man... I want to be a great one." He is fully aware of his own questionable morality. When flying in a bubble, Glinda says to him, "The shield allows a good-hearted person to pass." Which causes Oscar to remark to himself, "I'm gonna die." His journey of learning to help others is not unlike Dorothy, the Scarecrow, the Tinman and the Cowardly Lion discovering that the solution to their insecurities were within themselves all the time. They, like Oscar, just needed help in finding that out.

Agreeing with Patrick, Rachel Weisz steals all of  her scenes. She plays Evanora in the manner of a classic Disney witch, making her a deliciously diabolical demanding diva.  Michelle Williams is unexceptional as Glinda, doing the barest of requirements. Mila Kunis has the toughest role of the three and she made an impression on my teenage sons, who found her very hot in this film.

Although this may not become the classic that its source material has, it is very much worth a theatrical viewing. I am not a huge fan of 3D, but I believe this is a film made better because of it. Do not wait for the DVD to be released. It deserves to be seen on the big screen. 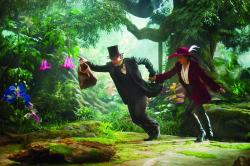 James Franco and Mila Kunis in Oz the Great and Powerful.

Like my brothers, I enjoyed this film. It manages to pay homage to MGM's classic 1939 Wizard of Oz, without being an imitation or a remake. There are several Easter Eggs for longtime fans, but you could watch it with no previous knowledge of Oz without losing anything.

We've never been huge fans of 3-D films here at Three Movie Buffs, seeing it more as a money making gimmick than anything else, but like Eric, I actually recommend seeing this one that way. There's plenty of eye candy and the 3-D really makes it pop. The landscape on view often reminded me of something out of Dr. Seuss, only in vivid color, 50 feet high and in high-definition 3-D. There's always something to look at no matter what is happening on screen.

I wasn't overly impressed with James Franco as the lead. He's perfectly adequate, but I too would have preferred Robert Downey Jr. as the wizard. He always manages to be a charming bad boy, while I've always thought Franco comes across a bit slimy.

All of the actresses playing the witches do a fine job. Neither of my brothers were impressed with Michelle Williams, but to be fair to her, it's easier to steal scenes when you're playing an over-the-top, evil character, than it is when you have to be the good witch. I didn't find her to be nearly as bland as Eric or Patrick, but then I've always been a big fan of hers. Weisz does do a great job as the villain, as does Kunis. My problem with Kunis's character is that she becomes so upset, so fast, over what she sees as the wizard's betrayal, that it never really feels believable.

Like Eric, I had very low expectations going into this movie. That alone helped me enjoy it more than I might have, but I think I would have enjoyed it anyway. It's lightweight fun that both kids and grownups can enjoy.

Given the enduring popularity of the 1939 classic, it's hardly surprising so many attempts to recapture the magic of Oz have been tried, it's only surprising that so few of them have ever succeeded. With the strong box office opening of this film however, it doesn't look as though we'll have long to wait before we return to that magical land. 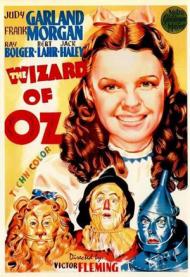 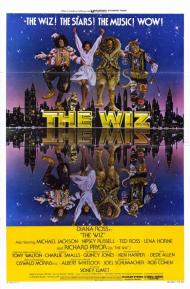