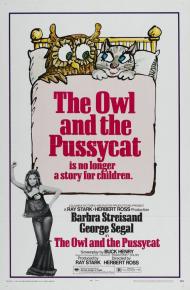 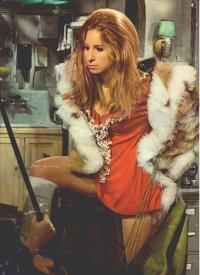 Barbra Streisand in The Owl and the Pussycat.

The Owl and the Pussycat, adapted from the Broadway play, presented Barbra Streisand with her first non-singing role. It was also much more adult in its themes and language than anything she had done previously. In fact she was one of the first big box-office stars to utter the word “fuck" onscreen and she even filmed a nude scene that ended up being cut from the final print.

As the title suggests this is a story of opposites attracting. Babs plays Doris Wilgus, Wadsworth, Waverly, Washington, Wellington, Winters (she just can't decide on a last name). She's a hooker who claims to be a model and an actress. She lives in the same Manhattan apartment building as Felix (Fred) Sherman, played by George Segal. He is a clerk at Doubleday's and an aspiring writer. Felix is as introverted, uptight and intellectual as Doris is loudmouthed, uninhibited, and insecure about her lack of an education. When Doris complains to the super about Felix's late night typing he turns the tables by informing on her male caller activities. She gets thrown out of her apartment in the middle of the night and shows up at Felix's door.

What ensues is hilarity of the first order as Doris and Felix spar verbally and finally fall for each other.

The movie does a good job of capturing New York City, mostly at night. In fact nearly every scene takes place at night. The ending in Central Park being the only extended scene shot in the daytime.  Like most other movies made at that time the city is shown as a dirty place populated with all kinds of weirdo's. In one of my favorite moments, Doris and Felix are walking down the street when a stranger says, “Woo, Woo" to Doris. Felix asks who that person was. Doris replies that she doesn't know. Felix says, “But she said hello to you." Doris says, “No she didn't, she said woo woo." Felix then asks, “Are complete strangers in the habit of saying woo woo to you?" To which Doris answers, “Not until tonight."  It is Streisand's unique delivery that sells the punchline.

This is a comedy classic that too often gets overlooked. It is also a great time capsule, perfectly capturing the look and spirit of the late 60's and early 70's. While it's not Barbra's best comedy, that would be What's Up, Doc?, it is her best comedic performance. 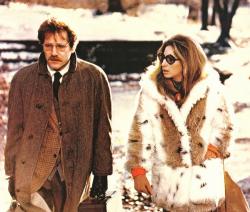 The best thing about The Owl and the Pussycat is the rapid fire dialogue. When Doris finds out that the nervous Felix told on her she pays him a visit. She knocks on his door but he is skeptical about opening it up. “I am a little girl all alone in the hall way.” She assures him. “Swear?” He asks. Doris then responds literally with, “God damn it.” He eventually opens the door to Doris and to a new look at life.

Felix is a nervous, insecure grown man who wants to be a writer, while Doris is a prostitute who calls herself “... a model and an actress!” because she appeared in nudey magazines and a porn film. They are opposite and are, of course, what they each need in their life. Doris brings him out of his shell and Felix treats her with respect. In one scene she dares him to get naked in front of her. As soon as he does, she laughs. In another scene, he tries to give her a compliment because she uses an invented word, “stoobulating.”

Although they grow from knowing each other it is their arguing that is the meat and joy of the movie. At one point Doris insists that Felix read some of his work to her because it might help her sleep. One of the first lines he reads is, “The sun spit morning into Julians face.” Not only does this not help her sleep but she gets up and yells “What gives you the right to say that the sun spit morning into this guys face?” Her truthful appraisal of his lousy writing is what he needs as much as she needs to hear from him that she is, in fact, a whore. Of course she responds, “I may be a prostitute but I am not promiscuous.” 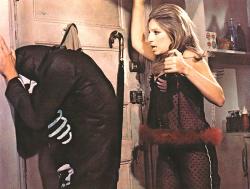 I completely agree Eric that the dialogue is terrific.  The screenplay was written by Buck Henry (who also wrote the other Streisand comedy classic, What's Up Doc?) and while I'm not familiar with the original play, he certainly provides some very funny moments.  In fact, a soundtrack album was released that contains most of the dialogue of the film and even without the visuals the jokes still come through.

One thing that I really like about this movie is that you actually get to see Felix and Doris' relationship develop.  In too many romantic comedies the leads simply meet and are instantly in love for no readily apparent reason.  Here though, they start off disliking each other, but as they challenge each other, the sparks begin to fly and their chemistry really starts to show.  It's definitely an odd pairing, but you can see why in this case the opposites attract rule really applies.

Early Streisand definitely produced some of the best work of her career and I think it might be either that in her earliest films she didn't have complete control or she was just willing to take more chances.  In her later movies she's always Streisand first and the character second and she's so very carefully controlling about what you see on film, but in her earlier work and this one in particular, you see a rougher character.  Although she's still obviously playing a Jewish girl from Brooklyn, it's a very different role than you're used to seeing her play.

While the script is fantastic, it wouldn't have worked if the two leads hadn't shared a chemistry and Segal and Streisand are great together.  One of my favorite scenes is when Felix, in an attempt to lull Doris to sleep, acts out several scenes as if he were on television, using a fish tank as the TV.  And another of my favorites is when Doris describes to Felix some of the many bizarre sexual requests she has fulfilled, to which Felix proclaims, "Doris, you're a sexual Disneyland."

One thing I must point out is that on the DVD version of this movie, Streisand's, "Fuck off" line has been cut, which ruins the scene where it is said.  Doris and Felix are having a conversation about how language can enrich your life and increasing your vocabulary is a great thing, which is all just a build up to Doris going over to some guys who are harassing her and saying very politely, "Do us a favor and just fuck off".  Without that line the whole scene is a joke without a punchline.  What a stupid decision by Columbia.

Patrick, you say that this is Streisand's best comedic performances and I agree with you.  I would also go so far as to say that it is one of her best overall performances in any genre and quite possibly my favorite of any of her films.