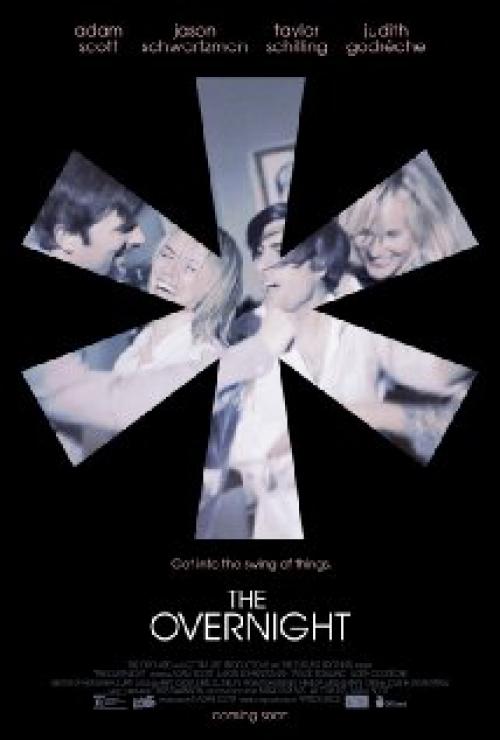 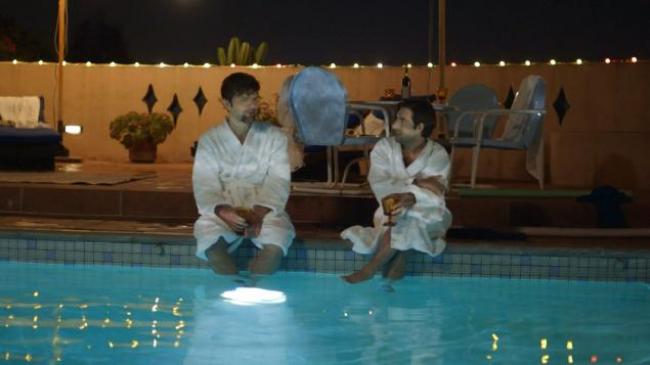 Adam Scott and Jason Schwartzman in The Overnight.

In writer/director Patrick Brice's new comedy The Overnight, a children's playdate becomes a bizarre adult encounter after the kids are put to sleep. Adam Scott (Parks and Recreation) and Taylor Schilling (Orange Is the New Black) play a married couple with a young son. Having just moved to Los Angeles, Alex and Emily haven't made any new friends yet, so when Alex and their son RJ are approached by another father/son at a park and the two boys hit it off right away, it doesn't take much convincing before an invitation to dinner has been accepted.

Jason Schwartzman plays Kurt. He dresses like a hipster and paints close-ups of anuses. He is impressed by the fact that when he shows them his work, both Alex and Emily recognize his subject matter without having to be told. His wife Charlotte (Judith Godrèche) is French. Their son's name is Max. After dinner, the parents engage in harmless conversation as the kids play, but once the boys are safely bedded down upstairs, the evening turns interesting - and by interesting I mean unpredictable and weird.

I won't spoil the details but suffice it to say that as the evening progresses, and copious amounts of alcohol and marijuana are ingested, things get even more interesting – and by interesting I mean strangely sexual and incredibly awkward. Of course the proceedings include a skinny dip in the pool. Kurt unabashedly gets naked, revealing a very large penis (a prosthetic was used).

It turns out that Alex has always suffered feelings of inadequacy over the size of his own penis. Bolstered by liquid courage, and a feeling of manly support from Kurt, Alex is finally able to disrobe, revealing his tiny manhood (also a prosthetic). Seeing the two of them side by side in all their glory, like a python and an inch worm, makes for a very comical sight gag. The evening ends on a very funny and unexpected note.

The small cast gels together well. They make you believe even the film's most outlandish situations, which could easily have seemed contrived and sitcomish in lesser hands. As good as the women are though, the men steal the movie. No one today plays insecure better than Adam Scott and Jason Schwartzman's had plenty of practice playing eccentric characters in Wes Anderson movies. Together Scott and Schwartzman make a memorable comedy team.

Credit is also due the filmmaker. Brice's script is concise and witty. As a director he keeps the pace from lagging. In fact the entire movie runs just 80 minutes. The Overnight is an original adult comedy with a winning cast and a funny screenplay.