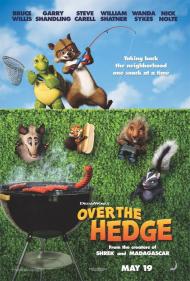 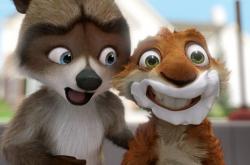 So far Dreamwork's Animation has run second to Pixar when it comes to computer generated cartoons. Certainly, they've had great success with the likes of the Shrek movies, but overall they've been Pepsi to Pixar's Coke. And while Over the Hedge doesn't match the quality of Toy Story or The Incredibles, it is highly entertaining and proves that they are more than a one trick ogre animation company.

Apart from the underlying anti-consumerism subtext (which is so very, very ironic when you consider the mountains of tie-in merchandise available for this movie), the plot is very simple. RJ, the Raccoon (Willis), begins the story by trying to steal an angry bear's winter horde of food while the bear is hibernating. When he is caught and the food is destroyed in the process, he is told by the bear (voiced by gravely-toned Nick Nolte), that he has one week to replace it all or the bear will kill him. Knowing that there is no way he can gather all that food on his own, RJ tricks a group of naive woodland animals into helping him. When the animals welcome him into their group as part of their extended family, RJ begins to feel guilty about using them in this manner and must decide between his new found loyalty and self-preservation.

The movie features a huge cast, with virtually every character being voiced by a recognizable celebrity and is uniformly great across the board. Gary Shandling plays Verne, the cautious turtle who quickly becomes jealous of RJ's popularity. William Shatner does what he does best; over-act, as the possum who continually plays dead whenever threatened, even managing to gasp out, "Rosebud", before "dying" in one scene. Eugene Levy and Catherine O'Hara both inexplicably feature some amusing Canadian accents. It is Steve Carrell, as the physically quick, but mentally slow Hammy the squirrel who steals the movie though.

Most of the humor in the movie comes from the animal's antics as they attempt to infiltrate a suburban neighborhood in their quest for food. The jokes range from slapstick for the little ones to a few clever quips that only the adults will get. Unlike Shrek, the movie doesn't rely on a host of pop references for its humor and consequently, will probably age better.

The animation is solid, if not ground breaking. Easily good enough for the job at hand, but never really dazzles the eye.

Anyone looking for lighthearted summer entertainment, suitable for the whole family, this is the place. 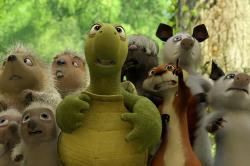 Animated movies do not get much cuter than Over the Hedge. A bunch of adorable woodland creatures trespass into a manufactured neighborhood and proceed to steal and terrorize the residents. As Scott mentioned, this movie has a lesson about belonging to an extended family but what kind of message is it sending with the "it's okay to take what you want" plot line?

Americans are made fun of for their wastefulness and their excessiveness. “We eat to live. These guys, live to eat!” RJ tells the woodland animals about the humans. In another scene they walk by a vehicle and R J says, “That is an S.U.V. Humans ride in them because they are slowly losing their ability to walk.”

The one problem I had with this movie is that its message gets really blurry as the animals become addicted to they very junk food that the humans enjoy. They also destroy the humans property much as the humans did to the animal's woodland. The movie builds on interesting human observations but ends without making a decent point. Should some woodlands be preserved? Should humans and animals learn to coexist cohesively? A better ending would have been to have an animated Darryl Hannah show up and beat the heck out of the President of the Home Owners Association, and then have one of the critters crap on Hannah. After all Over the Hedge is all about irony. 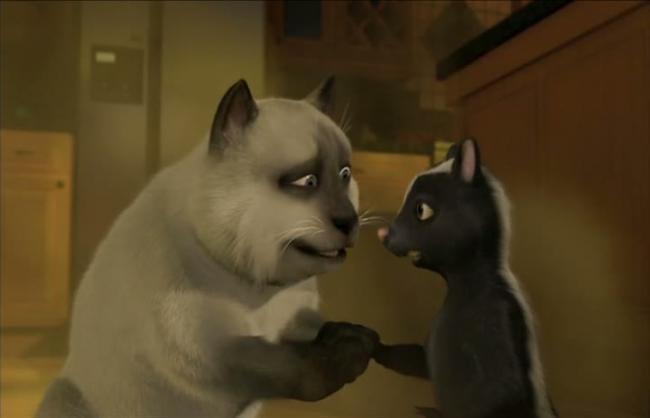 Eric, the “blurry message” you didn't like originated in the 1990s comic strip this film is based on. One of its themes being the idea that these animals are repelled by encroaching suburbia but also enticed by it at the same time. RJ being the most obvious example of this. Perhaps it's too sophisticated of an idea for very young children to grasp but I don't think it hurts the story. There's an environmental message but it's done in a very lighthearted, non-preachy manner.

Each and every character perfectly suits the actor voicing them. Bruce Willis is great as the free spirited raccoon RJ, advising the other animals on human behavior, “Now if a human does happen to see you, just lay down, roll over and give your privates a good licking. They love it!” Garry Shandling plays the pessimistic overly-cautious Verne the turtle as well as you'd imagine, “I thought we'd be dead by step two, so this is going great.” My favorite character was Wanda Sykes's man hungry Stella the skunk. Her seduction scene with Tiger the amorous Persian cat being a highlight of the movie (see photo). She delivers her wisecracks in that distinctive tone of hers. “Oh, so we're supposed to go hungry just because your butt's vibrating!” William Shatner's big melodramatic death scene as Ozzie is hilarious.

I'm not normally a big fan of animation but Over the Hedge offers a nice mix of slapstick fun for the kiddies with sly nods to the adults. Scott mentioned the “Rosebud” line and there is also a reference to A Streetcar Named Desire when Tiger yells “STELLA” dramatically. Over the Hedge has a lot going for it. It runs less than 80 minutes, the characters are fun, the animation holds up fairly well a decade later, and the voice work is outstanding.