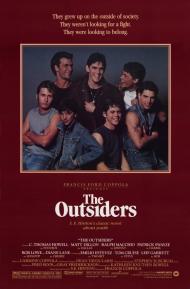 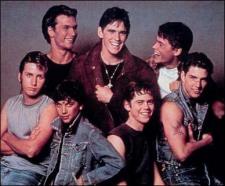 I recognized the first line of The Outsiders, because it is the same as the book. “When I stepped out into the bright sunlight, from the darkness of the movie house, I had only two things on my mind: Paul Newman, and a ride home.” I never read the book, but it has been discussed more than once by my brothers, while I was in attendance. They both love the novel, and I can only guess that it is better than the movie, because I found little to love in it.

After a Greaser kills a Soc, he and another gang member hide out in a church. An opportunity arises, and he ends up saving his soul through an act of bravery and unselfishness. The Outsiders has plenty of great messages. It speaks of the importance of family, friendships, and loyalty. It also says that it is okay for men to cry, as these tough guys seem to bawl every other scene.

I was, at first, bothered by the class envy between the gangs, but it is actually more of an excuse than a reason for the rivalry. At one point a Soc tells a Greaser, “You can't win. You know that, don't you? It doesn't matter if you whip us, you'll still be where you were before, at the bottom. And we'll still be the lucky ones at the top with all the breaks.” I find that line very offensive as it dismisses both groups. Just because you are poor you are at the bottom? Rich kids do not have any problems? However, the line is delivered in a way that is more sad than rude. He is saying it with dark sarcasm as if he understands that those are the stereotypes and not the reality.

No matter what anyone’s opinion is about this movie, it will always be remembered for one thing: the cast. At the time this movie was made, Dillon was the most recognizable, having starred in Tex and Liar’s Moon. The rest of the cast would soon break out and become very successful, making this film a mere foot note in their career.

Not to nitpick Eric but this movie is set in the 1960’s, not 50’s. In the book they mention the Beatles and in the scene at the drive-in Beach Blanket Bingo is showing. Besides that I agree with you that this movie is flawed and is nowhere near as good as the book. The most memorable thing is the amazing cast.

I don’t at all understand your taking offense at the line the soc says to the greaser. There have always been class rifts between rich and poor. These are teenagers speaking. Don't you remember high school Eric? In the '80s we called them preppies and stoners. This line rings true to me. After all, the author of the book was in fact a teenager growing up in the society she writes about.

What is most disappointing about this book to screen translation is the decision to omit all of Ponyboy’s exposition. The book gives us his thoughts and observations. Without that the story loses most of its subtext and the other characters are much less sympathetic since we don’t see them through Ponyboy’s eyes. Other than the opening line, of which only half is heard, and a few lines during Pony's and Johnny’s stay at the church, there is no voice-over narration.

Another mistake is that the opening scene is inexplicably missing. Yes it begins with Ponyboy writing the first line in his school composition but the book actually has him leaving the movie theater and getting jumped by some Soc's. Then the gang shows up to save him and we are introduced one by one to each member. This is a much better opening scene than Johnny, Ponyboy and Dallas going to the drive-in. Since this movie is only 90 minutes long I wonder why they didn’t include this pivotal opening scene. It’s a big mistake and the movie never fully recovers.

The thing they did right is in the casting, especially of the three main characters. The scenes at the church with Ponyboy and Johnny are very well done. Johnny Cade was always my favorite character and Ralph Macchio is perfect in the part. Matt Dillon is also perfect as Dallas. If Frances Ford Coppola had filmed the book’s opening scene and had Ponyboy narrate the story this would be a 4 star classic. As is it gets 2 ½. 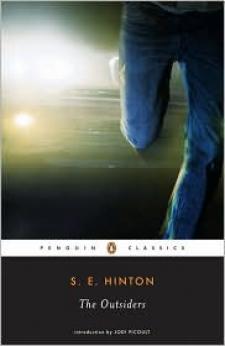 Do yourself a favor. Put down the remote, open the book instead.

No movie could ever live up to my memory of this novel. I haven't read it in many years and I hesitate to even do so because I just know that I will end up being disappointed. I couldn't begin to guess how many times I read it as a kid, but it had to be dozens.

The cast did all mostly go on to become famous, but almost none of them are how I pictured them being in the book. I think C. Thomas Howell makes an awful Pony Boy. He's not a very good actor. Ralph Macchio looks the part of Johnny, but I don't think he does that good of job with the part either. Only Matt Dillon lives up to my memory of the book. Sure, his delivery of the line, "We'll do it for Johnny." is a little melodramatic, but then the whole movie kind of is anyway.

One thing that can't be faulted is the look of the movie. Although made in the 1980s, it looks as if it were made in the 1960s. The era is faithfully reproduced and Coppola films some scenes with great style, particularly the knife fight in the park and Pony's last meeting with Cherry Valance on the hill with the sun setting behind them. The only scene that seems weakly filmed is the fire. When Johnny is hit by a beam in the church it hardly seems heavy enough to do the damage he's shown with later and Macchio stumbles around in the smoke unconvincingly.

Patrick, you might be interested in seeing the director's cut of the movie that was released in 2005. It's called the "Complete Novel" cut and it includes 22 minutes of deleted scenes, including Pony getting jumped at the beginning of the movie and some court scenes at the end. It also includes a soundtrack more reminiscent of the time period. It does not, however, include narration, which I agree with you could have improved the movie overall.

S.E. Hinton wrote this novel when she was just 15 years old and it was published when she was 17. Maybe because it was written by someone so young that I was able to relate to it so much when I was young. The fact that it was written by a teenage girl certainly explains the naming of some of the lead characters and why, as you mention Eric, so often the male characters start to cry. As a bit of trivia, Hinton makes a cameo appearance as the nurse in Dally's hospital room.

In the credits for the film it mentions that it is dedicated to some high-school students who first suggested that it be made. I'm not sure they should be credited so much as blamed. Some books should never be filmed because they'll never top the source material. The Outsiders is one of those books. 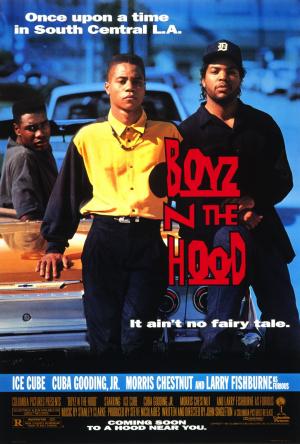