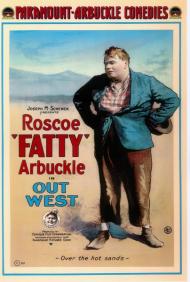 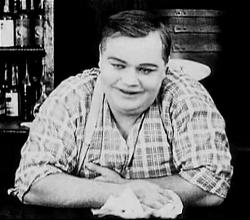 Roscoe 'Fatty' Arbuckle in Out West.

The first thing you notice about Out West, compared to other Arbuckle/Keaton films, is that it does not take place in the usual setting. Co-written by Natalie Talmadge, Out West has some funny moments but also some that are a bit disturbing.

Arbuckle plays a train tramp who gets chased and eventually tossed off and left in the desert. He comes across a small western town. The local saloon loses his bartender in a shootout. Keaton lifts a “Bartender Wanted” sign seconds after he gets shot. Apparently they go through lots of them. Arbuckle takes the job.

A Salvation Army girl shows up asking for donations. Arbuckle immediately has eyes for her, but the local bad guy, St. John, does as well and in a shoot out kidnaps her and takes her to his hideout. He tries to force her to drink alcohol. I guess he does not want to rape a sober woman. Arbuckle pursues and rescues her.

There are some funny ideas here, such as a trap door in the floor of the saloon. Every time someone dies, Keaton just opens it and rolls their body into it. There is also a scene that would shock today's audience. For whatever reason, Arbuckle, and a bunch of cowboys torture a young black guy in the saloon. They shoot guns at his feet to make him dance. The guy is reduced to tears. The Salvation Army girl eventually stops it.

When Keaton started making his own films he would often employ family members. Here his Dad has a small role as one of the guys working on the train who chases Arbuckle. Talmadge would become Keaton's first wife a few years later. 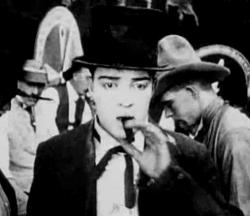 Buster Keaton in Out West.

Eric, it isn’t for “whatever reason” they torture the black man. The fact that he is black IS the reason. As horribly racist as this scene is, taken in the context of the entire movie, it is understandable.

Out West is, after all, a satire on the Western genre as it existed in 1918. There are probably many clichés that would have been instantly recognized by audiences of the day.

The melodramatic style in which this particular scene is shot suggests that it was a fairly common theme. The Salvation Army girl is shown in extreme close-up, and then the black man gets a close-up with tears streaming down his face.

The actor playing him was Ernie Morrison Sr. His son (Ernie Morrison Jr.) would become the first black child star a few years later appearing in the original Our Gang serials and then later becoming the token black Dead End Kid.

Out West is visually interesting. It was filmed on location in San Gabriel Canyon at the Angeles National Forest in California. The town settlement is authentic looking and there are some great panoramic shots of men on horseback riding along the top of the cliff.

There really aren’t that many jokes to be had. I laughed exactly twice.

The first time was when Fatty was bent over, drinking water in the desert. He is spotted by three Indians who see his rotund behind sticking up in the air. The title card reads, “Look, big fat paleface. We catch him, we eat all winter.”

The other time I laughed was when Fatty kept repeatedly hitting the unfazed Wild Bill Hiccup over the head. He must have broken a dozen bottles on his noggin before finally just shooting at him. 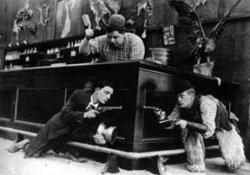 You're right Eric, the location does stand out in this movie. Where Arbuckle and Keaton's earlier films were shot in and around New York, this one takes place out West and director Arbuckle takes good advantage of it. The shot when he is being chased on the train's roof, is actually quite beautiful. The three men are silhouetted against the sun as they run to very good and artistic effect. There are also several nice looking desert vista shots early on in the film and the panoramic shots you mentioned Patrick. Arbuckle wasn't just a talented comedian.  He also had quite the director's eye.

This might not be the funniest Arbuckle/Keaton collaboration, but I think it's funnier than both of you give it credit for. Like you Patrick, I laughed at the number of bottles that are smashed over St. John's head. I also liked the trap door for disposing of bodies and the readily available "Bartender Wanted" like you Eric. But I also laughed at the poker player and his obvious cheating methods. And diminutive Keaton as the tough guy Western Sheriff is definitely worth a few laughs.

I always find this old films historically interesting, usually because of how they show life at the time they were made. This film struck me though, because of the time period it depicts. Many of the people watching this short when it was released would have been able to remember when Indians really were a danger to Western travelers. It was less than 45 years before this film was made that Custer was killed at Little Big Horn.  The Old West was closer in history to the date of this film's release than the 1950s are to today.

The casual racism is merely indicative of the time. I wasn't so shocked when the other cowboys shot at the feet of the black man, but was when Arbuckle and Keaton gleefully start doing it as well. The line you mention Patrick, which implies the Indians are cannibals, is equally racist, if not quite so overt. I'm sure if these films were more popular there would be a movement to edit some of them, like the ridiculous attempts to change the language of Huck Finn.

This might not be Arbuckle's best work, but it still entertains if you're in to this kind of thing. The silent short is not my favorite mode of entertainment, but even I have to admit that Arbuckle and Keaton were masters of it.