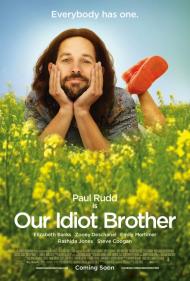 Paul Rudd and Elizabeth Banks in Our Idiot Brother.

Apart from the well known cast, there's an almost sitcom feel to Our Idiot Brother. The comic setup and characters seem almost tailor made for a television comedy. There's even an episodic feel to the story. It's light and funny enough, but it's the enormous likability of Paul Rudd as the title Idiot that really makes this movie work.

Ned (Rudd) is an optimistic hippy living in upstate New York where he works on an organic farm. When the movie starts he is arrested for selling marijuana to a uniformed police officer. When he gets out of jail he finds out that his girlfriend has a new boyfriend and subsequently doesn't want him moving back in with her. Ned moves in with first his mom, then each of his three sisters in turn, wreaking havoc in each of their lives with his optimistic and overly honest approach to life.

His first stop is with Liz (Mortimer), who is married to documentary filmmaker Dylan (Coogan). Liz and Dylan are a rather pretentious couple and Ned gets along better with their young son than he does with them. He breaks their rules for their son by showing him a fun time and walks in on Dylan in a compromising situation with the subject of one of his documentaries.

Next is Miranda (Banks), a career woman working at Vanity Fair. Ned accompanies her on an assignment where he learns more than she does but doesn't want any of the information used in a story. He also sticks his nose unsuccessfully into her love life.

Lastly is Natalie (Deschanel), the bohemian lesbian sister in a long term relationship, but who has an affair and becomes pregnant. She makes the mistake of letting Ned in on her secret.

Each of the encounters with his sisters are amusing and the cast is terrific. Deschanel is as adorable as always, but Banks - looking remarkably like Parker Posey - probably brings the most to the sister roles. This is Rudd's show though and he carries it well. He's so honest and optimistic that it's easy to assume that he's mentally handicapped as his parole officer points out in one of the movie's funniest jokes. As Ned puts it though, he just likes to assume the best of everyone, such as when he asks the man sitting next to him on the subway to hold a wad of cash for him.  He's a figure of fun, but then he seems happy, which is more than can be said for the rest of the more "normal" cast of characters.

There are several funny moments between Ned and Billy, who is as much of a hippy as Ned. Billy is Ned's ex-girlfriend's new boyfriend, but the two of them don't let a little thing like that stop them from being friends.

Even the finale feels a bit sitcomish, with its neat and tidy Hollywood ending.

Our Idiot Brother, much like its lead character, is a gentle and likable comedy. If they ever did actually make a series out of this movie, I might watch it, but only so long as Rudd reprised his role. 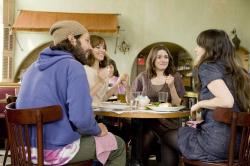 Although at first he seems to wreak havoc in his sisters' lives, Ned ends up helping them all. He provides all of them with much needed cathartic therapy. By the end of the film they are all better for having had Ned come back into their lives.

Miranda gets her soul back and admits that her neighbor is likely the "one". Natalie does not have an abortion due to his big mouth and it ends up making her relationship stronger. Liz learns that her husband is a dick and she becomes a better parent once he is gone. Most importantly, they all learn that Ned is not the complete loser they all wrote him off as early on in the movie. At first they were all in a hurry to give him the money to move away, but by the end of the film they were all wanting him to stay.

It does have an episodic sitcom feel to it, as Scott wrote, but it also does not help that everyone is playing a stereotype. Miranda is a cold woman of the work force, thinking only of herself and her next business success. Natalie is a feminine lesbian who sleeps with a man. Think Julianne Moore in the movie The Kids Are Alright, or Anne Heche in real life. Liz is a dowdy mom clueless of her husband's affair. Ned is the biggest stereotype of them all, that of the pot smoking nice as hell hippy. Ever since Hair, hippies have been portrayed as friendly, drug using, pacifists who are all too willing to get a conservative person to relax and open up.

As I was leaving the theater, a woman summed up this film in one sentence, "That was not as funny as I hoped it would be." Our Idiot Brother has some humorous moments, like when Cindy (the lesbian) is trying to get Ned to man up, or when the sisters try to get Ned's dog back from his ex. However, the best moments are actually the dramatic ones. Each sister has some drama come into their lives because of Ned and each have some scenes of revelation. The best moment is when Ned explodes on his sisters during charades.

Paul Rudd has developed into one of the best straight men in the business of the past ten years. Playing opposite famous comedians, Rudd has made many of them seem much funnier than they sometimes deserved to be. As Ned he proves he can be more than just a sarcastic sounding board. He is a decent actor who continues to expand his range. Our Idiot Brother is billed as a comedy, yet the dramatic moments have stayed with me longer. 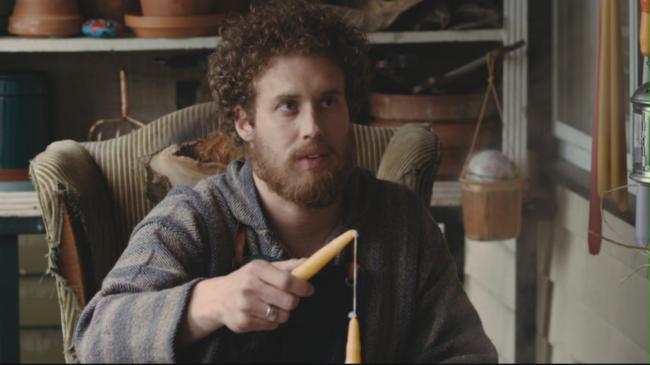 T.J. Miller in Our Idiot Brother.

I didn't find the characters in Our Idiot Brother to be all that stereotypical. Although you could argue that they all behave -at one time or another- in a cliched manner, I thought they were fairly well-rounded individuals, at least for characters in a motion picture comedy anyway. The performances help of course. I agree the cast is good and that Paul Rudd really shines bright here as the laid-back, conflict-avoiding, always-honestly-intentioned Ned. Rudd has exactly the right delivery on every single line and the subtle expressions that flicker across his face are priceless.

I too enjoyed the heartfelt dramatic moments but I thought Our Idiot Brother was also pretty funny. I would definitely recommend it. Granted the plot is certainly predictable. Once each sisters' situation is explained it becomes immediately apparent how Ned will interfere in each of their lives. The feel-good outcome is of course never in any doubt and the final scene in the park is a bit much when Willie Nelson meets Dolly Parton (two dogs).

It is in the humorous and heartfelt interaction between the characters that the movie finds itself. Rudd, Banks, Deschanel and Mortimer create a genuine familial bond. I really felt as if they were siblings. Shirley Knight plays their rather sad mother with an ever present glass of wine in her hands. The sisters' love interests are played by Steve Coogan, Rashida Jones and Adam Scott. Coogan in an unsympathetic role. All of them bring something unique to their roles. But like Scott, my favorite supporting character was Billy. Nothing phases this guy. He's hilariously played by T.J. Miller. Candles have never been funnier (see photo).

The real charm of Our Idiot Brother is the titular character so beautifully brought to life by Paul Rudd. This is the type of role that makes it a shame that comedic performances rarely receive critical accolades. Rudd was deserving of a Golden Globe nomination at the very least.