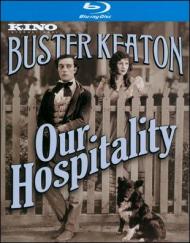 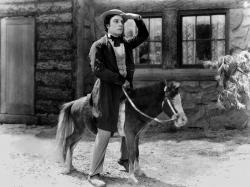 Buster Keaton in Our Hospitality.

Our Hospitality is Buster Keaton's warmup for future greater films. Not nearly as funny, or inventive as some of his other films, but it does still manage to entertain.

Keaton plays the son of a man killed in a feud. in the Appalachian Mountains. To keep her son safe, his mother moves him to New York. Years later, he decides to return to claim his family's estate. His aunt bids him farewell at the train station. She warns him to be careful out west in Trenton. Referring, of course, to Trenton, New Jersey.

What follows is an extensive train ride. Many antics ensue, such as when a man throws rocks at the engineer just so the engineer will throw logs back that the man then collects. It is plain to see that Keaton was fascinated by trains. He would later do better things with trains in the classic, The General.

On the train is a young lady whom Keaton falls for. As in Steamboat Jr, she turns out to be the daughter of his father's rival. She invites him to dinner. Her father and brother want to kill him, but the dad will not allow them to do so as long as he is inside their home.

The movie ends in a big action sequence involving rapids, a waterfall and Keaton doing some stunts. He wears his trademark hat and does the dead pan stare to maximum efficiency. The best moment is when he arrives at his destination and sees his dog, whom he has no idea has ran beneath the train the entire time.

Our Hospitality is not Keaton's best film but it was a family project. His dad plays the train engineer and his infant son plays him as a baby. It was also a rehearsal for his better movies to come. 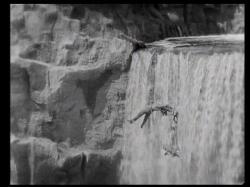 Eric, I have to disagree with you on this one. This is vintage Buster Keaton and one of his most thoroughly enjoyable films. It's fast paced and action packed and quite inventive. In some ways it reminded me a bit of a Harold Lloyd movie. There is a sight gag where Keaton disguises a horse as a woman using a dress and an umbrella that is reminiscent of Lloyd, and Keaton climbs up the side of a cliff in one scene. This was the same year Lloyd made Safety Last where he famously dangled from that clock several stories above the street.

Our Hospitality starts off dramatically with murder on a dark and stormy night. Not until Keaton makes his first appearance on that silly old fashioned bicycle (called a dandy-horse) does it become evident that this is a comedy. The feud between the McKay and Canfield families is an obvious parody of the famous Hatfield-McCoy feud.

The lovely Natalie Talmadge (Keaton's real life wife who was pregnant with their second child at the time) plays the love interest. She had two sisters, Norma and Constance, both of whom were more famous as movie stars than Natalie. She retired from films after making Our Hospitality. Her most famous movie was Griffith's Intolerance.

Keaton's passion for trains is evident. In fact the reason he set the movie in the 1830s was so he could recreate a working model of Stephenson's Rocket. It's an early locomotive that looks like a series of horseless carriages being pulled by a steam engine.

The scene Eric mentioned where Keaton sees his dog is memorable. The puzzled expression on Keaton's face is priceless. He has long been hailed as one of the finest physical comics in movie history but he was also a master of the deadpan double-take. His lack of facial expression gives him an enigmatic aura.

Some exterior location shots were filmed near Truckee, California and in Oregon. The famous waterfall rescue (see photo) was shot on a special set at Keaton's Hollywood studio. It was built above a pool with the valley in the background actually being done in miniature. It is one of his most memorable daredevil sight gags, perhaps ranking second only to the wall falling scene in Steamboat Bill, Jr.

In one scene, where Keaton was in the rapids being held by a cable, the cable broke and Keaton nearly drowned. If you pay attention you can see when this happened. He suddenly looks back at the camera and his speed doubles, nearly pulling him out of the frame. Fortunately he was able to grab hold of an overhanging branch until the crew could rescue him.

Scene for scene Our Hospitality may not be Keaton's funniest film but it certainly ranks as one of his best. 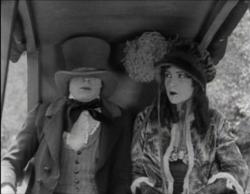 Buster Keaton and Natalie Talmadge in Our Hospitality.

I've yet to see a Buster Keaton film of any length that didn't contain some moment of inventive comedy and this one is no exception. However, taken as a whole, I have to agree more with Eric. This isn't one of his best, despite some amusing scenes.

The film starts, as my brothers mentioned, with a rather dramatic opening scene on a dark and stormy night, where two murders are committed. It's on odd way to begin a comedy. According to TCM, this opening scene was meant as a parody of 19th century stage melodramas, but if so, it's a joke long since lost over the heads of modern audiences. Watching it today, it just seems rather dark and unfunny, setting a tone that it takes a while for the comedy to shake off.

One thing that struck me while watching this movie is that it was released in 1923, but the story takes place 92 years earlier in 1831. At the time of this writing, it's 2013 and 1923 was 90 years ago, which means that 1831 was to Keaton, what 1923 was to me while I watched this movie. It's not pertinent to enjoying this short, but I did find it interesting to note.

Although the jokes, at least the ones that work, don't fly at you fast and furious, there are some very funny moments. I particularly enjoyed the scenes on the train, which, despite a strongish central story, could practically have been lifted out of this feature and released as a short. Something about trains seemed to inspire Keaton.

Since a Keaton movie wouldn't be a Keaton movie without at least one memorable stunt, I have to mention the waterfall rescue to which Patrick referred. It's not nearly as impressive as the wall falling scene, but the timing of it is superb and will make you smile just watching it.

There are flashes of genius throughout this film, but it will never be one of my favorite Keaton films.