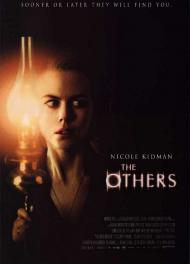 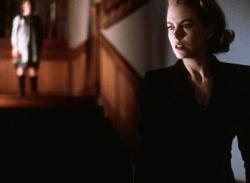 Once upon a time on the Isle of Jersey in the English Channel, in 1945, there lived a war widow with two small children. They lived alone and the two children suffered from a strange ailment that made them allergic to all but the dimmest of lights. Sunlight or even a bright lamp could cause their skin to blister and their lungs to close up and eventually suffocate them. Then one day, three mysterious servants showed up at their door looking for work. After hiring them on, first the daughter, and then the rest of the household began to hear strange noises around the large, old, rambling manor. Eventually the young daughter even claimed to have seen a young boy named Victor who kept telling her to get out of his house. As mystery followed mystery, it soon became obvious that the new servants were in some way connected, or at least had knowledge of the strange goings on in the house. Until finally, one fateful night of drama unfolded and the horrible secret of this house and it's occupants was revealed. Such is the plot to The Others, Nicole Kidman's new supernatural thriller. Told like a gothic horror story, it slowly and beautifully unfolds a story of ghostly mystery that will keep you entranced from beginning to end.

This is a wonderful movie. Filmed entirely around a large old English Manor House with only four actors partaking in the main thrust of the movie, it creates a small claustrophobic world in which everything you believe at the beginning slowly unravels. The mystery being revealed slowly and skillfully by the original script and under the gorgeous direction of Alejandro Amenábar who both wrote and directed the film.

Nicole Kidman who must nearly carry the film on her own, plays the gothic lady of the manor to perfection. She rivets your attention to the screen as the mother who must confront the truth of all that has happened and is happening in her own home. Almost ethereally beautiful as she haunts the rambling old house. draped in dark colors, contrasting sharply with her pale skin, she conveys both sorrow, anger, and dignity all at the same time. Alakina Mann as her daughter does almost steal a few scenes from her however, as she begins seeing what they think are ghosts around the house. The setting of the film is almost a character of it's own. The old English Manor and it's grounds, both constantly draped in a shroud of fog, is menacing, mysterious, and beautiful.

Both a drama and an old fashioned ghost story, The Others finally manages to do what no other movie has done in 2001, make me want to see it again. 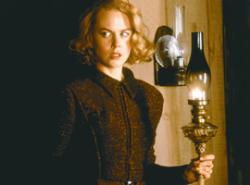 In The Others, Nicole Kidman gives the best female performance I have yet to see this year. Her name should be on ballots come Oscar time. Its a tour de force performance that one rarely gets to see.

Since Scott has so wonderfully explained the plot I have the pleasure of simply gushing over Kidman's acting. This movie has no special effects. There is little to no gore to speak of. The entire fear factor of this movie is wrapped in the package of Kidman's performance. Her reactions to hearing noises, or listening to her daughter explain that she saw something are all you need to get a chill up your spine. Kidman's emotional range completely and utterly carries this film.

Where as Kidman's performance is impeccable, the plot leaves a bit to be desired. I can't give much detail because there are a few surprises. However, I will write that the plot does meander a bit. I found myself thinking 'just get on with it' at one point. Perhaps I should not have gone into the theatre with this movie already cataloged in my mind as a horror film. Thoughts of blood splattering and the obligatory chase through the woods scene. (you know the one where the chick always falls down) filled my head. I would, after seeing it, still call it that, but a much more intellectual horror film than most. 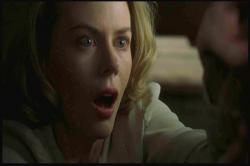 Scott's review appropriately begins 'Once upon a time... Appropriate because The Others is a fairy tale, albeit a rather sinister and macabre one. Like most fairy tales the story is simple yet intriguing and the mood never alters. It is both dreamlike and ephemeral. Unlike The Sixth Sense, with which it shares some of the same elements, the plot twist here is less shocking and not as important to the overall enjoyment of the story. Without giving it away I will say that I almost immediately guessed correctly but then convinced myself that it was far too obvious, and that I had to be wrong. I wasn't. This in no way detracts from the entertainment level of the movie, it merely shows that, at least in this case, the journey is more important than the destination.

The best part of the movie is the beginning. It is obvious that Nicole Kidman's character is not quite right. Her obsession with locking the doors and forcing the children to recite bible verses hint at something dark and perverse. True, the locked doors prevent the children from being hurt by any sudden light, but her paranoia definitely borders on the manic. Is this a normal reaction to finding herself a war widow with two small children on her hands or does it hide a darker truth? At any rate Kidman gets ample opportunity to show off both her acting chops and her radiant beauty, proving once again why she is among the top ranks of movie stars in this current generation. The children shine as well.

I agree with Eric that the middle drags a bit. (How many times can we watch characters going to investigate some mysterious noise?) In the end though the story satisfies and gives new meaning to the phrase ...And they lived happily ever after...