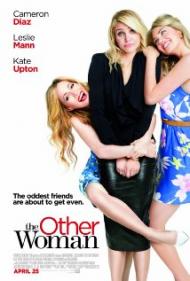 Kate Upton displays her talents in The Other Woman.

There's some talent on the screen in this one, but you'd never know it with this material. Diaz, Mann, and even Upton have been in much better movies than this one, although that's mainly because it would be harder to be in a worse one. The laughs are all cheap and mostly beaten to death. It makes most sitcoms seem sophisticated. It should have come with a laugh track so you'd know when you're supposed to laugh.

The plot is as simple as its characters. A wife (Mann) and two of her husband's mistresses (Diaz and Upton), all learn of each other's existence and then team up to extract their revenge upon the cheating man. Laughs fail to ensue.

Diaz plays Carly, a supposedly high powered lawyer. Her assistant is played by Nicki Minaj for no good reason other than to make the audience say, "Hey, that's Nicki Minaj." Despite her job, magnificent office with one of the world's best views of Manhattan, and upperclass lifestyle, her one and only obsession and topic of conversation is a man. This makes her the perfect companion for Mann's Kate, who, while supposedly the brains behind her husband's success, likewise is only interested in talking about and defining herself by her husband. Upton gets no personality, but is her usual gorgeous, zaftig self, whose meager conversational skills--and even more meager acting skills--are also limited to talking about the same man as Carly and Kate. These stereotypes wouldn't be quite so bad if any of their conversation was in anyway funny.

The jokes are lowest common denominator. Mark, the center of all this attention (played by Game of Thrones' Nikolaj Coster-Waldau), is reduced to shitting his pants and then having explosive diarrhea on a toilet for laughs. Diaz is pushed out of a window and slapped in the face by dog balls in two other hilarious scenes. Upton is supposed to be playing the ditzy blonde, but for once the script holds back and she's never ditzy enough. It's willing to exploit her body by having her jog in a bikini, but it doesn't want to make fun of her stupidity. Either that or Upton wasn't able to perform the jokes, but somehow I doubt that would have stopped the filmmakers from trying.

Of the three stars, Mann manages to squeeze out the most laughs as the fraying housewife. Her character is a milksop, but watching her meltdown, at least for awhile, is worth a mild laugh or two. For the first half hour or so, she and Diaz try to make like a modern day Lucy and Ethel. You can almost picture them getting somewhere in those classic character's vicinity, but only if they were in a different movie with a better script.

There are only three male characters with many lines and two are shown in a negative light. The husband and Carly's father, played by Don Johnson, are both shown as immature and constantly on the make. The third male is Kate's brother, who plays the safe and neutered character for Carly to fall for. Also along for most of the ride is Kate's large male dog, who seems to be making the point of what this script thinks of men.

Granted I am not this movie's target audience. Being male, sober and having a decent sense of humor bars me from that exclusive group. I probably haven't seen the best movie of 2014 yet, but it's possible this is the worst one.

Kate Upton In The Other Woman

The Other Woman opens with Mark and Carly having an affair. It is all dining, flowers, walks in the park and plenty of sex. As Carly explains to her assistant, “It’s very new.” When not having sex with Carly in the city, Mark goes home to his wife in the suburbs. With Carly it is romance, while with his wife, it is a conversation on how he needs to eat better and a schedule of personal appointments he does not actually want to keep. Carly is confident and sexy while Kate is quirky and awkwardly pleasant.

Cameron Diaz and Leslie Mann are perfectly cast in their roles. Diaz makes a great sexy lawyer. She could liven any boring business meeting by just showing up. Mann steals every scene with slapstick humor and comic delivery. Note the sarcasm in her voice when Mark halfheartedly complains, “I hate working weekends.” And Mann responds, “I feel so sorry for you.” Kate Upton, as Amber, provides her large breasts and a cute smile.

The men in the film have even less personality than Amber. Nikolaj Coster-Waldau, as Mark, is little more than an adult child in a sexual candy store, trying to consume all the sex/candy he can. Coster-Waldau’s funniest moment is when he whines about his estrogen enhanced nipples, “I can’t go to work with my tits taped!” The movie is not even happy enough to simply make him a horn dog. He has to be a white collar criminal as well.

Taylor Kinney, as Kate’s brother Phil, plays the role of the perfect nice guy, who somehow does not have a girlfriend. When he asks his sister what she plans on doing when she meets her husband’s most recent girlfriend, Mann responds, “Don’t come at me with all your weird little…man logic.” It is the only time a guy is given any sort of legitimate credit.

As Scott commented, this is a chick flick of the highest order. These are upset women getting revenge on a man who did them wrong. It has some similarities to Nine to Five (1980) and even some shades of Thelma and Louise (1991). As I am a man, I never truly invested in whether or not these women got their revenge. Carly and Amber chose to have sex with a man they barely knew. How is that his problem? So he lied to get them into bed. So what? Women create a lie every time they put on makeup.

Kate is the only one with any real motivation but how she goes about getting her revenge is, as Scott wrote, something out of “I Love Lucy” or “Laverne & Shirley.” Hell, putting something in Marks drink to give him diarrhea is something you would expect from an Adam Sandler movie. I did laugh when he showed up at home in the skinny pants, but that was only because my oldest son and I enjoy making fun of hipsters.

If the script wanted the audience to feel anything it should have put at least a small amount of culpability on Kate. She could have been the one to encourage him to work long hours and take an apartment in the city during the week. Kate would have been a much more rounded character had she felt some amount of guilt for what happened, even if unfounded. Alas, this film has all the depth of a drunken teenager. Mark is made to be so smoothly vile that he is almost cartoonish. Considering that every woman he looks at begins to flirt with him and he always has a reason to go out of town, how exactly was Kate surprised to find out he had an affair? Then again, nothing in this film rings at all true. 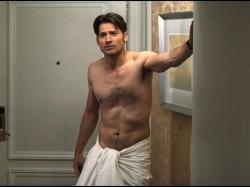 Nikolaj Coster-Waldau flaunts his talent in The Other Woman.

I agree that Mann and Diaz work well as a comedy team. They have the physical humor that both Lucy & Ethel and Laverne & Shirley were famous for down pat. I'd like to see what they could do with a halfway decent script. By the time they were face to face singing along in slow motion to “Love is a Battlefield” I was silently cursing my brothers for reviewing such a shitty movie. And was it just me or did every other scene seem to include some sort of pop song montage moment?

Nick Cassavetes has certainly taken a more commercial path than his maverick father, the late director/writer/actor John Cassavetes (actress Gena Rowlands is Nick's mom), ever did. During his heyday back in the sixties and seventies John Cassavetes was the very definition of the independent auteur, a professional Hollywood outsider. His son Nick has no such aspirations. He seems more than content to churn out mainstream crap like this. His most famous movie thus far is the ultra-romantic The Notebook (2004), and with The Other Woman grossing 200 million dollars worldwide it looks like he's found his niche as the go to guy for chick flicks.

You read right, this movie took in 200 million dollars at the box office! Clearly it appeals to the female revenge fantasy lurking deep inside any woman's heart; it paints very simplified versions of the male sex and the women come out on top. But these women are all gullible as hell and they're as annoying as they are unfunny. Mann can't tell her husband is cheating even though his behavior, lies and excuses are all completely transparent. Diaz is supposed to be a high-powered lawyer who's been, “dating for decades”, and yet it takes her eight weeks to figure out her new boyfriend is married – and even then she only figures it out because she follows the advice of a man – her father played by Don Johnson. As for Upton, was she even in this movie? I didn't notice. In addition to having no perceivable acting talent she's also bland and uninteresting. On the surface The Other Woman may seem to be empowering women but its real message is that women obsess constantly about men.

Don Johnson was the only person in the movie I found even the slightest bit interesting – and he's in only a handful of scenes. Likewise Nicki Minaj has a throwaway role. She plays the stereotypical “sassy black assistant” just like Jennifer Hudson in Sex and the City, proving exactly how far we haven't come since the days of Hattie McDaniel. At least she gets the movie's best line when she tells Diaz that, “Selfish people live longer.” How true. Take that advice. Unless you want to be bored to death stay far away from The Other Woman.