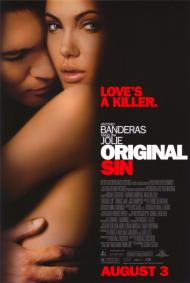 Original Sin is supposed to be a sort of bad Harlequin Romance, but it's not even bad enough to be good. It tells the story of a Cuban Coffee company owner (Banderas) in the 1800's, who sends away to America for a bride. When she (Jolie) arrives, he is surprised because she doesn't look or act as he was expecting. Of course this is because she isn't who she claims to be, but nevertheless he falls madly in love with her and they have mad passionate sex. When she runs off with all of his money, it is only her husband who is surprised. The rest of the movie is spent with Banderas trying to track her down and solve the riddle of her identity.

A quarter of the way through this movie, Jolie's character, while attending a play, quips, "I love the theatre. Even when it's cheap melodrama." Well, you'd have to really love cheap melodrama to like this movie. It's lackluster script, the un-enthusiasm of its cast, the boring plot, and the annoying, oh so annoying, choppy editing style, all add up to a must miss event of a movie.

This is supposed to be like one of those bodice ripping, trashy, romance novels, only someone forgot to rip the bodice open and instead laced it too tightly. Unless you're dying for a glimpse of either Antonio's ass or Angelina's tits, give this one a miss. 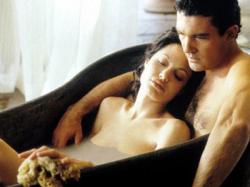 I disagree Scott, Original Sin does go completely overboard with everything. When Julia and Luis meet for the first time they both admit that they lied. She claims to have sent an unattractive photo of herself to her future arranged marriage husband so he would not fall in love with her beauty. That does not make even the slightest sense, yet he buys it. His lie was that he was not wealthy. It is another lie that serves no purpose, as she would discover the truth upon arrival.

Since the leads are played by two of the best looking people in the world, they engage in hot sex. He translates their copulation into love while she fucks to manipulate. Shock of shocks, she turns out to be a phony. I think the old, "too good to be true line" fits her. As Luis's wise Jamaican maid says, "You were married to a dream that stole your soul." How can you blame Luis. Angelina Jolie has made a career out of seducing men. Who wouldn't fall for her charms?

She steals Luis's life savings, but it is apparently not enough for this vamp as she quickly looks for another victim. She teases and denies some guy, who cries to her through her bedroom door, "My heart is pudding. My pudding is broken." How in the hell Scott, is this movie not campy enough?

When Luis finds her, they have a big scene with guns pointed, screams of apologies and devotions of love. They of course end up in bed together with Jolie exposing her nipples again. She tells him her story and they reconcile. Her latest victim comes knocking on her door while on his knees. Banderas opens the door completely naked, with his crotch at the victims eye level.

Later, A detective shows up looking for Julia. He holds Luis by the neck and with his face against Luis's asks, "If I kiss you now would I taste her on you?" He then proceeds to kiss him passionately on the lips. This is all followed by a shooting, a fake murder, and the detective is revealed to be someone else.

If that is not over-the-top enough for you, how about Bonnie getting gang raped or Luis discovering the truth in a brothel. Thomas Jane as the detective, gets the cheesiest lines. "It tickles my dick when you beg." "You're a whore Bonnie. A man touches you and you're wet." GOOD GOD Scott, Elton John in drag could not make this movie any campier! Do I even need to go on about the funny as hell shooting scene or the ridiculous ending? Original Sin is a fun film if you can find the unintentional humor in it. 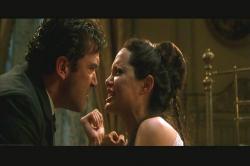 I agree with Eric that Original Sin is over-the-top campy. But unlike him I didn't enjoy this crappy film at all. The script is filled with ridiculous dialogue and even more ridiculous gratuitous sex. Like Scott I found the editing to be annoying as hell. Eric mentioned several of the intended to shock moments. Others include Jolie getting cut on her back as a mark of ownership by her crazy lover, and in another scene he spits in her mouth. For her troubles Jolie was nominated for a Golden Raspberry, and deservedly so.

What neither of my brothers mentioned was the source material for this horrid movie. It was based on the 1947 novel Waltz into Darkness by crime writer Cornell Woolrich, who was, incidentally, a gay man. His name may not be well known today (he wrote many of his stories under pseudonyms) but according to Wikipedia he has had more film noir screenplays based on his work than any other writer. These include a 1942 short story titled It Had to Be Murder which Alfred Hitchcock retitled Rear Window for his movie adaptation. François Truffaut made an earlier screen adaptation of Waltz into Darkness in 1969 under the title Mississippi Mermaid, and starring Catherine Deneuve and Jean-Paul Belmondo.

From what I can gather online both the novel and the earlier movie make a statement about the redemptive power of unconditional love. The man is willing to drink poison for the woman he loves and in so doing she finally understands the meaning of true love. Of course in this version that point is glossed over and is followed by one of the stupidest endings I've ever had the misfortune to sit through. Even though the first time they attempted to cheat at cards (using the most obvious signals imaginable) he got his ass kicked and she got gang raped, they are shown happily attempting it again. WTF?! In what I can only assume was an attempt to make the female more sympathetic they added the character of the fake detective that is really Julia's ex-lover. Not that it matters.

Original Sin is so bad it's a crime.