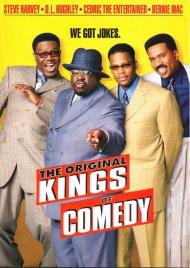 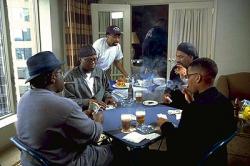 The screen version of the very successful Stand-up touring show, The Original Kings of Comedy is one funny movie. Steve Harvey, D.L. Hughley, Cedric The Entertainer and Bernie Mac each give an equally humorous and unique take on modern living. Whether discussing family, sex or the differences between black and white in our culture, they never fail to deliver the comic goods. Spike Lee lends his clout to the film by directing, although there is really not much for him to improve on and he seems content to let the players carry the show.

Steve Harvey starts things off with his opinions on old-school soul music versus hip-hop. He soon has the whole crowd swaying and clapping in approval to his disdain for rap music. His interpretation of the Temptations is particularly good. D. L. Hughley is next with his trademark jabs at the way audience members are dressed. The crowd seemed to really enjoy his good-natured ribbing. The always funny, Cedric The Entertainer kept the crowd pleased with his ruminations on how white people live by the hope philosophy (gosh, I hope no-one is in our seats), and black people live by the wish philosophy (I wish somebody would be in our seats!). Finally, the funny-looking Bernie Mac closes the show with his description of his sisters three hell raising children.

Spike Lee does at least deserve credit for this movie's incredibly intimate feel. He intersperses shots of the four comics backstage and on the basketball court, yet never lets things stray far from the show onstage. These are four old-pros at the peak of their games. I like to think that I know funny, well THIS MOVIE is it. If you enjoy well done stand-up (and who doesn't?), then you will definitely enjoy The Original Kings of Comedy. 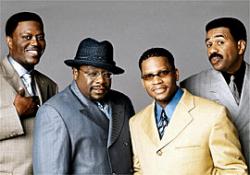 Bernie Mac, Cedric the Entertainer, D.L. Hughley and Steve Harvey are The Original Kings of Comedy.

Patrick, apparently you and I have different views on what is funny. Too many of the jokes rely on the differences between blacks and whites or simple profanity for my tastes. Also, nearly 2 hours is far too long for a stand-up comedy movie.

This movie is, at the time of writing, almost 12 year old and it shows in the jokes and the suits worn by the comedians. It opens with a very dated and unfunny sequence from Steve Harvey about former wide receiver Rae Carruth who was arrested for murder in 2001. I had to look up the name just to see who he was talking about. He then moves into another dated and not very funny routine about Titanic. He later makes some good points about rap, but I can't say I found it all that funny.

Cedric the Entertainer does a routine that seems rather ironic now, about a black president, although it bears little resemblance to Obama. His humor also relies heavily on poking fun of the differences between black and white. Some of his dated jokes include surprised references that black athletes are winning in traditionally white sports such as tennis and golf, with the Tiger Woods and the Williams' sisters being fairly new to the sports world at the time.

The scenes of the comedians off stage do nothing but prolong the running time. They should have been left for the DVD extras. I feel like they were added simply to give Spike Lee something to do. Why he was needed to direct a stand-up movie is a bit of a mystery. Apart from adding some weight by attaching his name to it, I can't see what he brings to the table.

Time and again the comedians make points about the differences between blacks and whites. Maybe they have a point. The mostly black audience seemed to find them hilarious. Personally, I couldn't wait until this overly long movie finally drew to an end. 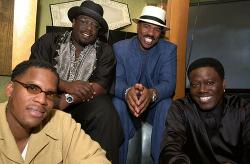 I am in agreement with Scott on this one. The crowd seemed to be loving all of these jokes, while I was only half entertained, at best. Clearly, white people were not the intended audience for this show.

At least half of the jokes are based on offending whites. Anyone who thinks racism is only alive and thriving because of white people has not been paying attention to nearly all black comics. Yes, I know these are jokes, but they are still perpetuating stereotypes. Most of the time a jokes starts with either "You know, white folks always..." or "Black people love to..."

It was mostly the jokes that spoke of universal issues that I found any interest. I related to and laughed when Hughley talked about how sex becomes rationed after marriage or how his children caught them having sex. Bernie Mac is the most offensive, making fun of both blacks and whites. I liked the joke about a black person going to work and telling his boss, "I didn't come here to work."

My favorite moment was when Steve Harvey was making fun of rap concerts and the audience played right into his hands. He was pointing out just how stupid it was that a rapper tells the audience to wave and scream. As he is pretending to be a rapper, the audience does exactly what he is making fun of. Just when he had me, he went into a routine that involves introducing classic soul songs and the audience reacts as if Marvin Gaye himself walked on stage.

Cedric's "people in our seat" joke was stolen from an old Richard Prior routine. I liked his black president jokes though. "We can't handle no black president." He begins and then goes into a joke about how a black president could not handle the deficit. Bush left office in 2008 with a federal deficit of 459 billion. In 2011, Obama increased the deficit to 1.3 trillion. Who knew Cedric was so wise?

The Original Kings of Comedy show just how exclusive comedy is. Spike Lee only showcases the few white audience members to show them acting uncomfortable. That in itself explains comedy. We laugh at what we individually find humorous and relate to. Let me put it this way. Imagine how well Jeff Foxworthy, Jeff Dunham, Larry the Cable Guy and  Ron White would have been received if they had walked out on that stage. Now that would have been funny!