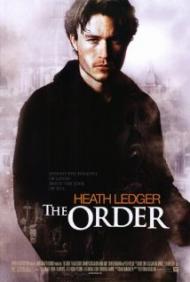 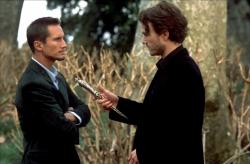 Benno Furmann and Heath Ledger in The Order

Brian Helgeland wrote and directed the truly enjoyable A Knight’s Tale (2001). A couple of years later he gathered three of the film’s stars; Heath Ledger, Shannyn Sossamon and Mark Addy to make The Order. Although it fails to match A Knight’s Tale in greatness, it does have some entertainment value.

Ledger plays Alex Bernier who is studying to be a priest in New York. He belongs to an order of priests who specialize in dealing with demons and such. After getting the news that the head of his order has died in Rome, he decides to go there with the very troubled girl named Mara, played by Sossamon. Before leaving with her, a New York Detective asks Alex, “It says here she tried to kill you at an - exercise class?” Alex clarifies that, “She tried to kill me at an exorcism.”

Once in Rome, Alex immediately recognizes that his old mentor’s death was not a suicide as everyone seems to want to believe. Alex knows that he died at the hands of a sin eater played by Benno Furmann. His suave good looks and accent make a charming villain.

Alex is joined by the unconventional Father Garrett, another member of his order. They deal with hell spawn as well as search books and sewers to find the sin eater. All the while, Alex and Mara become closer. After giving Mara some sunflowers, she says they are God’s, “…brilliant mistake.” Alex comments, “Like you and me.”

Although I found myself caught up in the story, the characters too often seemed to not react accordingly. At one point, Father Garrett and Alex witness a murder and seem completely unconcerned about a man dying in front of them. Another scene involves Alex facing two demonic children. After they go away, Father Garrett walks casually up to him and makes a stupid joke as if nothing exciting was going on. Why did he not help him?

This is not Helgeland’s best writing but the cast does what it can. Ledger certainly had star quality and plays it all very straight. With his unshaven face and movie star looks, Ledger plays a priest who just stepped out of a GQ magazine. Mark Addy is supposed to be the comic relief but never has any truly funny lines. When a demonic person says to him, “Fuck your God!”, Addy responds, “All mouth, no trousers...” I am not even sure what that means.

For me, the cast standout is Furmann. At first we see the sin eater as the villain, and he certainly is diabolical, but once we learn his past we start to understand him. When he comes upon Alex praying in a church, he asks, “Am I the answer to your prayer?” Later in the film, Alex repeats the line to him. The sin eater is by far the most interesting character and the film would have been better served if the entire story was told from his perspective. It is not until more than halfway through the movie that we realize that it is in fact his story we are seeing played out.

The Order has an interesting story to tell but unfortunately Helgeland did not spend enough time working it all out. His direction and choice of settings is fittingly eery. Much of the film takes place in old buildings and is often filmed in shades of gray and blue. This allows such objects as the sunflowers and rays of light to stand out but good direction does not make up for less than stellar writing.