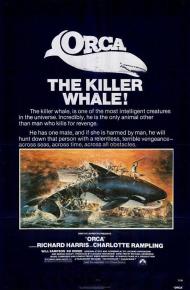 Orca was a film our parents took us to see on its initial release, way back in 1977. My memory of the film was vague but two images stayed with me all this time. The first is the scene where the female orca gives birth on the deck of the boat. The other was when Bo Derek has her cast covered leg bitten off by Orca. Both scenes are a bit gory and were quite impressionable on my young mind.

Watching it so many years later I found a film that is hopelessly ridiculous and far too melodramatic. Richard Harris, sporting the ugliest haircut ever put on a man’s head, plays Nolan, a fisherman who kills a killer whale when he tries to capture it. This is the scene where the whale is hanging up from the mast and the bloody orca fetus comes out and tumbles onto the deck. All of this is witnessed by the female’s mate.

Nolan dumps the fetus and orca carcass overboard. The male orca then pushes his dead mate to shore, near the village where Nolan lives. There, Nolan has to deal with Rachel, an arrogant marine biologist who thinks she knows everything about killer whales. After Orca shows up in the village harbor, Rachel tells Nolan, “He followed you. He saw you on the deck of the boat.” Orca then goes about destroying all of the fishing boats in the harbor except Nolan’s. Rachel explains, “He deliberately left you your boat because he wants to fight you alone on the sea.”

Nolan is not about to go back to sea as it would be foolish to enter the vengeful mammal’s element. Nolan, feeling a tad guilty, asks a priest, “Can you commit a sin against an animal?” The Priest responds, “Why, you can commit a sin against a blade of grass. Sins are really against oneself.” Rachel continues to pontificate, “Did I tell you that that animal has a right to be left alone?” Nolan, “No, but I have a notion you're about to.” Even an elderly Inuit named Umilak tells Nolan, “It is known that they have great memory and even after many years they will always remember the human being who has tried to harm them.”

After Orca demolishes a home by the sea occupied by Bo Derek and bites off her leg, it jumps out of the water with joy. It pisses Nolan off, who yells, “You want revenge? Well, you'll have it! I'll come out and fight you! You revengeful son-of-a-bitch!” With Rachel and a crew of men wearing red, Nolan gets in his boat and heads out of port toward his destiny.

After the success of Jaws (1976), a film about a killer whale seeking revenge on the man who murdered his family likely seemed an easy pick for the time. Jaws was just a great white shark feeding on a smorgasbord of human meals. Orca is treated like an advanced being capable of rational thought and knowledge of things way outside his realm of comprehension. No matter how many times Rachel states that killer whales are intelligent, I was never convinced that one would know how to do half of what Orca does here.

As a child, I found the humanizing of a killer whale to make sense and the showdown in the Arctic Ocean exciting. Watching it now I wondered why they didn’t just stay inland or go to sea with explosives and leave Rachel on shore. I showed my grown sons the scene with the orca fetus and they both found it disgusting. That may be the one moment that still causes an emotional reaction. For animal rights activists, that may be considered a win but as far as cinematic entertainment goes, you would be better off watching Jaws again.