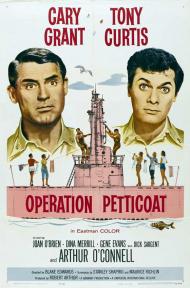 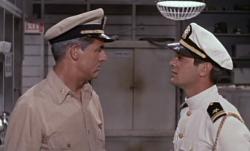 The same year that Tony Curtis famously mimicked Cary Grant in Some Like it Hot he also costarred with the legendary movie star in Operation Petticoat. By 1959 many Americans had begun looking back on the second world war with nostalgia. The opening scene shows Cary Grant, now an Admiral, making an early morning visit to his old sub, the U.S.S. Sea Tiger, on the day it is being sent to the scrap yard. Most of the movie is told in flashback as he reads his old log book and reminisces about the war.

It's December, 1941 and the Sea Tiger is badly in need of repairs. Tony Curtis comes aboard as the sub's new junior officer. It's his responsibility to get parts and supplies. In one scene Curtis and his handpicked crew break into a military supply warehouse. After much shenanigans, but before they can make the sub truly seaworthy, an enemy air attack forces them out to the open South Pacific. Soon they are joined by five stranded Army nurses. This leads to further hi-jinks amongst the crew as they deal with the exciting novelty of having beautiful women aboard. By today's standards this movie comes across as somewhat chauvinistic in its attitude towards the female personnel but it is all in good fun.

Future television stars Dick Sargent (Darrin #2 on Bewitched), Gavin MacLeod (The Love Boat) and Marion Ross (Happy Days) have small roles but it is the ageless Cary Grant who carries the movie on his shoulders. Always the gentleman, he lets Tony Curtis get more of the overt laughs, instead playing straight man and elder statesman. Although he wasn't yet ready to pass the torch to the younger generation. He would continue making movies for another seven years. Probably his funniest moment in the movie is when he is preparing to order a torpedo strike against a Japanese ship. As he is about to give the order one of the women (a walking disaster area wreaking havoc wherever she goes) enters the room. She disrupts their aim and the torpedo goes up on shore. To which the nonplussed Grant says in his inimitable way, 'We sunk a truck.'

Blake Edwards had only directed five other movies when he helmed Operation Petticoat. It was one of the year's biggest hits and today remains a funny, if somewhat dated, war-comedy. 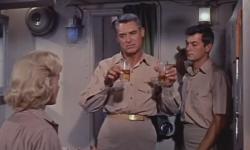 Okay, so it is a bit chauvinistic. But with today's politically correct doldrums, some good old fashioned sexist attitudes can actually be refreshing. In fact, my favorite line in the movie is spoken by Cary Grant, 'When a girl is under 21 she's protected by law. When she's over 65 she's protected by nature. Anywhere in between, she's fair game.' Sure, this may offend some feminists, but it's Cary Grant, and it was really not intended to seem that way.

With two charismatic stars and a great comic director, the film moves along at an entertainingly quick pace. However the plot is predicatable and sitcom ready. In fact Tony Curtis's daughter Jamie Lee was in the short-lived television series based on this movie.

If done today, I am sure the sex factor would be greatly amplified, but I am not sure that it would make it any better. Here it rises above the crude sex jokes and only makes occasional suggestive remarks. The line, 'A woman just shouldn't mess around with a man's machinery' can be taken several different ways.

Operation Petticoat is a funny film with a flimsy plot that you can easily overlook due to two of Hollywood's most charming actors. 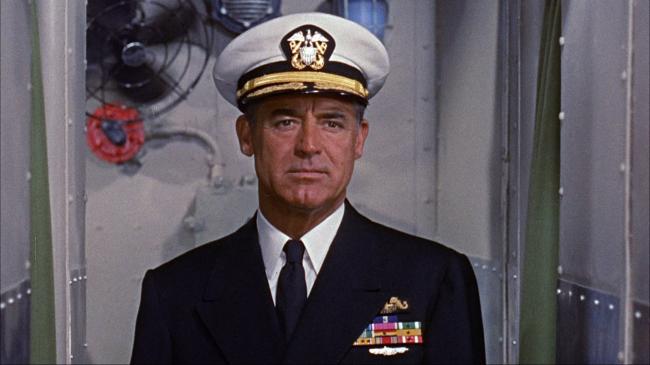 It doesn't surprise me to learn that this movie was adapted into a television series. Although the fact that it took almost 20 years does. The plot is so episodic that it lends itself naturally to a weekly, ongoing format. Also, the humor level is about on par with a sitcom. It's only the presence of Grant and Curtis that elevates it.

According to legend, when Tony Curtis enlisted in the US Navy in 1943, he requested the submarine service in part because of seeing his hero, Cary Grant, in Destination Tokyo. It was a dream come true for him to actually star opposite Grant and in a submarine film. The two make a fine pair, but as Patrick noted, Curtis gets the much funnier role. Grant, like many a sitcom hero, plays the straight man, while all the lunacy happens around him.

Much of the humor involving the women is incredibly dated and sexist, but in some ways that actually makes it funnier. The more taboo sexist and racist language becomes, the more shocking it is to hear it as the punchline to a joke. And to tell the truth, the humor needs all the help it can get because it really is very much of the cheap variety. Some of these jokes are older than Grant, who was in his mid-50s when this movie came out. They're cute rather than hilarious and more likely to make you smile than laugh out loud.

Despite the presence of several women on board the sub, the jokes never become too risque. About as sexy as it gets is the running joke of what happens whenever one well-endowed young nurse has to pass a sailor in the rather narrow hallways. One wonderfully dated joke revolves around Grant explaining the operation of the sub's toilet. What makes it so dated is that the word "toilet" is never used, nor is the object in question ever allowed to be seen.

Despite a game assist from the supporting cast, it takes all of Grant's and Curtis's charms to keep this movie afloat. Even with them, it only manages to chug along about as well as the pink submarine in the story. It's enjoyable enough in its way, but far too lightweight to make a lasting impression.