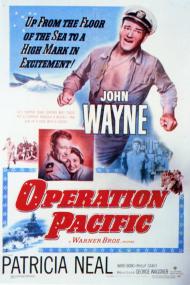 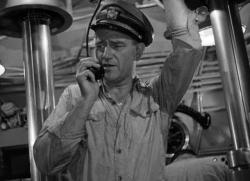 Operation Pacific has John Wayne as a captain of a submarine in the pacific ocean during World War II. With a love triangle, a rescued orphan and some nuns, this movie tried hard to appeal to women as well as men. It succeeds as well as any war movie of its day.

The movie opens with Wayne's submarine crew rescuing some nuns and children from an island. The next 15 minutes are cute as Wayne and crew deal with the saintly sisters and the rowdy children while they try to sink a Japanese ship and get back to Hawaii. Once back in port Wayne runs into his ex-wife, Neal, at the hospital where a baby boy he rescued is being taken care of. When Neal first hears that Wayne's sub is back she quickly asks her boss if she can get off work because of a splitting headache. Shortly thereafter her boss catches Neal getting kissed by Wayne to which Neal says to her boss, "This is the headache."

Neal and Wayne divorced several years prior, after the death of their son. Neal is now engaged to a pilot. Of course Wayne and Neal still have feelings for each other and without too much thinking you can tell how this will all end. Before the movie can get too sappy, Wayne has to deal with his drunken crew on liberty and of course the Japanese when the sub heads back out. The movie features some great action scenes. Particularly one where the submarine rams a Japanese destroyer.

The movie has a great in-joke. While underway, the submarine crew watches Destination Tokyo. It is a World War II submarine movie, starring Cary Grant and John Garfield. Wayne asks one of the guys how is it. The sailor responds sarcastically, "The things Hollywood can do with submarines." Another notable thing about this film was that John Wayne's character's name is Duke. Is this where his nickname in real life came from? I am not sure but it seemed very fitting whenever a character called him that. 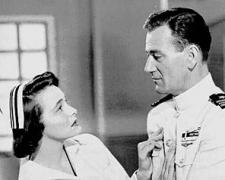 John Wayne had one of the most prolific and enduring careers ever in Hollywood. Other actors have appeared in more movies, but no one ever had more leading roles than the Duke. He played the leading role in more than one-hundred-and-forty movies; and amazingly enough, he never missed a year without a new release from 1929 to 1976! Now that’s staying power.

Of course Wayne is best known for his westerns but he also fought onscreen across every major war and battle in United States history. By far the majority of his war movies were set during the Second World War like Operation Pacific. I agree with Eric that this is a decent movie. It has some exciting action sequences and is fairly fast-paced.

The problem is that Patricia Neal is far too young and there is no chemistry between her and Wayne. The best chemistry in the movie is between Duke and the crusty old Commander played by Ward Bond. His death is the biggest emotional jolt in the movie.

Wayne’s competition for Neal is played by Phil Carey. He never quite made it big in movies but he will be long remembered by fans of the daytime soap One Life to Live. For many years, right up until last year, he played larger-than-life patriarch Asa Buchanan.

Operation Pacific isn’t one of John Wayne’s more memorable movies, but it is a decent World War II action/drama. 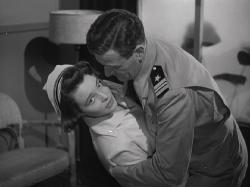 Eric, in answer to your question about Wayne's 'Duke' nickname, its origins are much older than this movie as he was called it from childhood. According to legend, when just a boy he was inseparable from his large dog named Duke. A local fireman took to calling the boy Little Duke and the dog Big Duke. Preferring it to his real name, which was Marion, Wayne kept the moniker for the rest of his life. According to imdb.com, he would play a character with the name of Duke, five different times, with this movie being the last of those characters.

Although Patricia Neal has said in an interview, "John Wayne had enormous appeal for the public, but I did not find him appealing in the least. I think my charms were lost on him too." and Patrick seems to agree with her, I thought they had fine chemistry together, or at least as fine as Wayne had with any woman outside of Maureen O'Hara. He was never known for playing romantic leads and this movie does little to alter that perception and does seem included, as Eric indicated, to try and broaden the appeal of the story to women as well as men.

The problem with the romance angle is that it feels very much like a soap opera, while, let's face it, the only real reason to watch this movie is for the scenes at sea on the submarine. As Patrick indicated, the death of the Captain, played by the always reliable Ward Bond, provokes a much bigger emotional response than does any of the scenes with Wayne and Neal.

Despite some pretty hokey underwater special effects, including some scenes that look almost as if someone filmed a toy sub in their bathtub, the battle scenes are well done. The centerpiece is the scene Eric mentioned where the sub's missiles are ineffective, so Wayne orders the sub to go to ramming speed with guns blazing.

I agree with Patrick, this one isn't particularly memorable or outstanding in any particular way, but it does entertain, especially if you're a fan of the Duke or WWII movies in general.