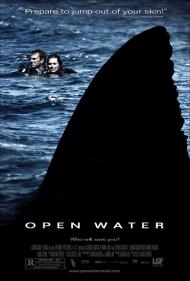 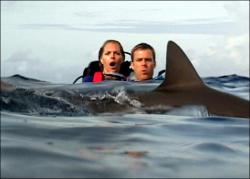 Open Water is one of those independent movies that attempts to buck traditional Hollywood filmmaking. It succeeds in that the acting is amateurish and the ending is shocking yet disappointing.

A dating couple goes scuba diving with a bunch of other tourists. When they surface, they find that the boat that brought them to the middle of the ocean has left them behind. They are now left in shark-infested waters with only their scuba equipment, a camera and a knife.

It is a marvelous setup. Floating in a sea of meat eating fish could be a great metaphor, but the director never goes for any symbolism. Having this couple stranded alone could have been great therapy for them. With nothing else to do they could have indulged in relationship healing dialogue. But no, the director merely has them argue over whose fault it is that this happened to them. The director could have shown us flashbacks about this couple's life together. No, we learn nothing about them while they bob in the water.

So what happens to them in the movie? Absolutely nothing! They float around. They get nerved up by the sharks. They argue a little and then the sharks eat them both. The end!

What an amazingly botched film. The director could have done so much with this but he chose otherwise. Okay, the female lead does a nude scene early on. It has nothing to do with anything that happens in the movie. The nude scene is completely unnecessary, but the actress is hot so what the hell.

It's too bad the director didn't put more thought into the characters and plot as he probably did trying to convince the actress to do the pointless nude scene. 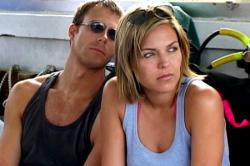 This is definitely an independent movie that is trying to work outside the box. All the ideas Eric mentioned about the movie could have worked, but they would have made this a much different picture. This movie is striving for realism and does a good job of achieving it. All the banal conversations the couple get into are believable given the situation. The emotional arc seems real. First the disbelief, then boredom, then anger, fear and full blown panic. He's right about the acting though, it is pretty amateurish, especially the guy.

The thought of being left in the middle of the ocean is terrifying to me. I was disturbed on a primal level. But as the danger and fear increase, the bad acting gets more and more noticeable. And I agree that the ending was disappointing. This movie is about shock but the ending tries to be poetic. I wanted to see the director go all the way and have a feeding frenzy on them with bloodcurdling screams. This ending may be more realistic, but like Eric, I prefer a little imagination in my movies. 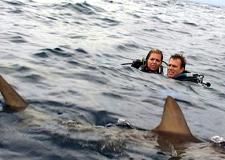 With the advent of digital cameras and the internet becoming an avenue of distribution, there were lots of stories being written a few years ago about how anyone with a large enough credit card could become a filmmaker and soon the traditional Hollywood model would change. Open Water was often touted as an example of that happening.

As is obvious five years later this movie was the exception and never the rule since buying the equipment to make a movie is the easiest part. You still need to be able to write a great script and hire talented actors; two things that Open Water lacked.

The thing this movie has going for it is its setup. I think most people would agree with you Patrick that the fear of being lost at sea is a primal one. The moments that do work in this movie are the ones that evoke that fear the strongest. When Susan is floating in the water near the end of the film and the camera is bobbing above and below the surface and you catch a glimpse of the large number of sharks that are swarming around her is perhaps the best shot in the entire movie. It's this shared fear that carries the movie. Despite the amateurish acting and poor dialogue you still want to know what's going to happen.

While I agree that the actors aren't the greatest, I put more blame on writer/director/editor Chris Kentis than I do on them. A professional studio film could have done reshoots, rewrites and careful editing to cover weak performances. Just being given better dialogue would have probably improved their performances immensely.

I appreciate the attempt the filmmakers were going for but if a studio had bought the idea and redone the movie professionally instead of just distributing the original, the end result would probably have been better.