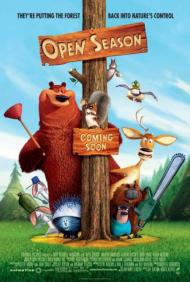 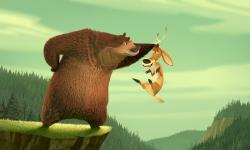 Open Season is Sony's first foray into the animation biz. If this is its first volley in an attempt to take on Pixar and DreamWorks, then its shot falls far short. Instead of a combination of jokes aimed at both children and adults, as the best animated movies provide, Open Season's jokes are mostly slapstick and almost all aimed at young kids, plus the plot is a rehash of something we've seen a million times before and the voice casting is fairly generic. There are a few laughs to be had, but you'll have to hunt to find them.

Martin Lawrence provides the voice of Boog, a grizzly bear who was raised by Beth (Messing); a park ranger in apparent desperate need of a boyfriend, child or any kind of human contact on which to lavish her attention. Boog lives in the garage in contented domesticity. His blissful life is disrupted by the arrival of Elliot (Kutcher), a deer that Boog unties from the hood of a hunter's truck after Elliot's been hit by it. Elliot introduces Boog to the world outside of the garage and following a drunken night on the town (apparently bears and deer get drunk on sugar), Beth is forced to admit that perhaps Boog would be better off in the wild. While the two animals sleep off their sugar high, Beth transports them up into the mountains via a helicopter where she hopes they will be safe from the evil hunters (I guess everyone who made this movie must be a vegetarian) when hunting season begins the next day. Of course all Boog wants to do is get back home to his comfortable lifestyle.

Since this is essentially a buddy picture you'd hope there would be some sort of chemistry between the two leads, but there's really not. I wouldn't be surprised to find out that Kutcher and Lawrence never met or heard each other's lines. If they did, it's even sadder since then there's no excuse. Despite this, Kutcher does get a few funny lines, but Lawrence is pretty much left playing the straight man. He's given so few jokes that having a comedian even voice Boog is pointless.

What entertainment there is to be found comes from the supporting characters. The Scottish squirrels are funny and the beavers are worth a chuckle or too, as is the porcupine who follows the duo for the rest of the movie after Elliot refers to him as "buddy".

The human characters though, fare worse than their animal counterparts. Gary Sinise (wasn't he nominated for an Oscar once?) as the psychopathic hunter out to track down and kill the two leads is completely unfunny, but this isn't a slam against the actor (apart from his taste in roles) since the writers never give him anything funny to say or do. And Messing as Beth is just sad as the park ranger who dotes upon Boog as if he was a child. I know some people become very attached to their pets, but this borders on the mentally unhealthy.

I'd say that I was just too old to enjoy this cartoon, except that I saw this movie on a weekday afternoon with an audience of parents and a whole bunch of little kids. By halfway through the movie you could hear the restlessness set in as the kids started squirming in their seats and a few even started moving around the theater.

If Pixar or Dreamworks were worried about the new competition, they can rest easy. Sony's got a long way to go before it can challenge either of those animation powerhouses. 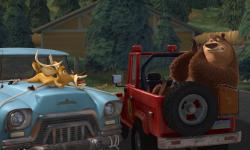 Scott has officially lost his inner child. Open Season is not a perfect movie but it is fun and yes, entertaining. The learning to go to the bathroom outside scene was one of the best. After Elliot craps right in front of Boog, Boog shyly goes behind a bush but finds he has an audience of critters watching him do his business. Is it still considered bathroom humor if it's done outside? Scott is right that the supporting animals are some of the best. My personal favorite is the Squirrel, “Try it again and I'll be kickin' your furry brown Ba-Hookie!”

Where I was most annoyed, and least surprised, was in the stereotype of the hunters. The main hunter is a grotesque, animal killing moron. In fact, all of the hunters are seen as nothing more than animal killing morons, “Is that your truck Earl?” One hunter asks another as a truck gets blown up by some animals. While I am thinking about it, none of the humans are too bright here. Even Beth, who supposedly loves Boog, uses him to make money, in a dancing bear show. At least hunters respect the animals they kill.

Open Season hints at some dark humor. Most movies involving animals make jokes at the human's expense. The funniest scene here is when we see how Elliot first lost his antler. More humor like that could have really helped this movie out. My sons enjoyed that one as well. But other than abusing some rabbits, this movie follows the straight and narrow. Open Season is worth a few laughs but it could have been so much more had it the guts to throw in more adult humor.