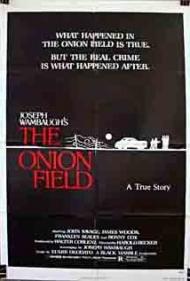 John Savage as Det. Karl Hettinger is about to make the biggest mistake of his life in The Onion Field.

Joseph Wambaugh spent 14 years as a California policeman before he became a writer. The Onion Field was his third book and it was based on a true crime that occurred in 1963 near Bakersfield, where two petty criminals kidnapped two police officers after being pulled over for a routine traffic stop. They took the officers to an isolated field where one of the officers was shot in cold blood. The other officer managed to get away. This movie details both the events of that fateful night as well as the years of legal proceedings that followed, and the emotional aftermath for the surviving officer.

James Woods and Franklyn Seales (that members of a certain generation may recognize from television's Silver Spoons) play criminals Gregory Powell and Jimmy Smith, respectively. They meet on the streets of L.A. after Smith is released from jail. The mentally disturbed Powell strong-arms Smith into joining up with him. They are an unlikely pair. Smith sleeps with Powell's pregnant girlfriend in one scene and it is suggested that Powell is bisexual. Later he is shown having a boyfriend in prison and there is one -graphic for 1979- scene where Smith goes down on Powell in a prison shower in exchange for Powell pleading the Fifth Amendment in court and thus saving them both from death row. The legal proceedings get a bit muddled and I am not exactly sure just how this worked.

The movie also shows us the two police officers. Karl Hettinger played by John Savage and his partner Ian Campbell (a pre-Cheers Ted Danson making his movie debut) are out on a routine patrol when they cross paths with Powell and Smith.

The first half of the movie is very good as we meet these four interesting characters who are on a collision course in that titular onion field. The acting is quite good with Woods being the standout. The events of that evening will have you on the edge of your seat as they unfold. When the actual murder occurs and Campbell gets gunned down Hettinger runs for his life and you will feel as if you are in that field with him running for your life too. It is a brilliantly tense scene.

The aftermath of these events is also fairly gripping but the story begins to lose focus and the many different trials begin to get a bit confusing after a while. Hettinger becomes a pariah among his fellow officers because he broke the cardinal rule of giving away his gun to the bad guy. Although he did it in an attempt to save his partner's life it is expressly forbidden. It was such a colossal mistake that years later the LAPD made a training video based on Hettinger's actions as a way of showing rookie cops what not to do. Not surprisingly, Hettinger begins to crack up. He eventually begins shoplifting and is forced to resign from the force. John Savage does a good job of showing this man's helplessness and frustration as his life comes apart at the seams.

The Onion Field was a movie I first saw on HBO back in the early 1980s. I was pretty young to be watching such an adult movie and it left a definite impression on me. Seeing it again for the first time in more than thirty years I must say it holds up well. I had no idea that Ted Danson was in it as he wasn't famous at the time. He has a fairly small role but he does it justice. As a cinematic recreation of a true crime The Onion Field is remarkable. Unfortunately the second half that deals with the aftermath rambles on a bit.

James Woods in The Onion Field

Patrick, what were our parents thinking? The images in the prison are not for children’s eyes. At one point, a naked man cuts his own wrist and lets the blood drip down his face and body. In another scene Smith proves his loyalty to Powell with oral sex.

The first hour is tense and scary as we meet the truly vile Gregory Ulas Powell. We see him recruit the weak willed Jimmy Lee 'Youngblood' Smith. They commit some robberies until the night in question when Powell and Smith abduct Detective Karl Francis Hettinger and Detective Ian James Campbell. It is truly one of the tensest moments ever filmed. Powell is self-delusional, with a warped view of the world. As Patrick wrote, this dumbass is not nearly as smart as he thinks and it is his very stupidity that leads him to kill a police officer.

The aftermath is not as exciting, as the courts allowed Powell to defend himself, making a mockery of the judicial system. While Powell pranced and posed as an attorney, the surviving detective suffered from a form of PTSD. He was wracked with guilt and felt like a pariah in the police department.

John Savage is a decent enough actor, playing a man filled with more frustration than most men would ever want. Hettinger is a role with possibilities but Savage does little to add to the part. His reading of the line “At least we don’t have to worry about any more kids, not the way I’ve been performing in bed lately.” should have been said with a hint of ironic humor or with sad irony. It is instead horribly flat, as is the attempted suicide scene. Savage was not able to go where those scenes required.

As Patrick wrote, it is Woods who has the showier role and runs with it. Powell is despicable on every level. The irony being that Powell almost seems to be living it up while Hettinger is stuck in a worse situation. The crime happened in one night but Hettinger suffered for it the rest of his life. Powell and Smith received life sentences but so did Hettinger.