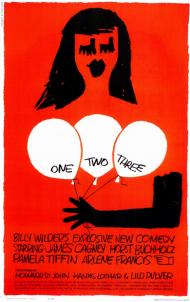 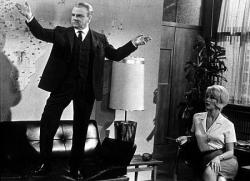 One day while on the set of Billy Wilder's One, Two, Three James Cagney decided to retire. This would be his last movie until Milos Foreman's Ragtime twenty years later. Set in West Berlin in the months before the wall was erected by the communists to seal off East Berlin, this black & white movie is a fast-paced comedy about a Coca Cola executive who must keep his conservative boss's daughter from marrying a radical communist in order to save his job.

Billy Wilder was fresh off the success of two of his greatest movies, 1959's Some Like it Hot and 1960's The Apartment. It was probably inevitable that One, Two, Three would be unable to live up to those masterpieces. In particular it seems to be trying to duplicate the feel of Some Like it Hot. It features similar jazzy music to underscore many scenes and plows along at the same frantic pace for example.

James Cagney (as was often the case in his long career) is the main reason for watching this somewhat dated comedy (a few too many nazi jokes). At 62 he could still bark out complicated lines with his trademark rapid-fire staccato speaking voice. As C.R. MacNamara he gets to deliver a few witty one-liners like, 'Some of the East German police were rude and suspicious. Others were suspicious and rude.' or 'Any world that can produce the Taj Mahal, William Shakespeare, and striped toothpaste can't be all bad.' Not all of the funny lines are given to him though. The boss's bubble-headed southern belle daughter Scarlet gets a few. When MacNamara hatches a scheme to convince her parents that Scarlet's communist husband is really a distinguished count, she excitedly exclaims, 'Countess? That means everybody has to curtsy to me, except maybe Grace Kelly.'

One thing this movie is not is subtle. It is filled with familar 'types'. Yes, the southern belle is really named Scarlet. The buxom blonde German secretary, the Russian businessmen, the young communist and MacNamara's ex-nazi assistant are all broadly painted caricatures. But Billy Wilder had something as both a writer and a director that many of today's film-makers lack, and that's great timing. So while One, Two, Three does not rank among his greatest movies it is nonetheless entertaining and original. And Cagney's over-the-top performance in his last starring role makes this movie a must-see for all serious movie buffs. 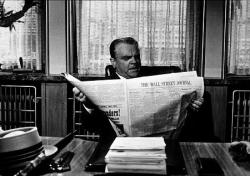 One, Two, Three is a very fast paced film, with more dialogue thrown around than baseballs at a little league game. Cagney was heading for retirement, but he still had his trade mark energy. He barks out commands and schemes at a break neck speed.

The movie is very interesting politically. It slams socialism at every turn. Otto is a dedicated communist party member but every time he opens his mouth he inadvertently makes fun of it. When talking to his new wife, he says that, "They (the communist government) have assigned us a magnificent apartment. Just a short walk from the bathroom." The movie likewise takes some pokes at capitalism. MacNamara has to royally kiss ass to get ahead. My favorite line in the entire movie sums up politics better than anything I have ever heard. Otto yells, "I will not have my son grow up to be a capitalist." and Scarlett explains, "When he's 18 he can make his mind up whether he wants to be a capitalist or a rich communist." Politics and political affiliation can mean nothing if you're rich.

Where the movie goes wrong is in the character of MacNamara. He is the center of everything, yet he is not very likable. He's greedy, selfish, uncaring and has affairs on his wife. The point of the movie is for him to pull off a huge scheme so he can succeed. Since he is not a very likable character, I never really cared if it succeeded or not, but it was fun to watch how it unfolded. 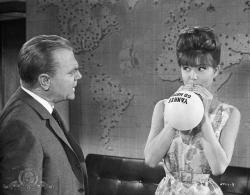 James Cagney and Pamela Tiffin in One, Two, Three.

No wonder Cagney didn't make another movie for 20 years after making this one. I think he needed that long to recuperate. From start to finish he almost never stops talking and talking loud and fast. One of the film's best sequences, when he is rehabilitating Horst Buchholz's image in preparation for meeting his new in-laws, reportedly took 57 takes to get right. Frustrating Cagney further was the fact that Wilder had given him the script pages for this scene only the night before and Wilder refused to allow him to ad-lib or paraphrase, demanding that he be word perfect. In a later interview, Wilder would say, "We had to go with Cagney, because Cagney was the whole picture. He really had the rhythm, and that was very good."

In Cagney's autobiography, he name drops dozens and dozens of big names and he has a kind word for all of them. The few times he has a negative story to tell, he leaves out the person's name. Only one actor in his long and storied career is named when spoken of in a bad light and that is Horst Buchholz.. Cagney wrote of his young co-star that, "This Horst Buchholz character I truly loathed. Had he kept on with his little scene-stealing didoes, I would have been forced to knock him on his ass, which I would have very much enjoyed doing."

With the high pressure of keeping up with Wilder's demands and dealing with a co-star that he didn't like, it's no wonder perhaps that Cagney decided to retire during filming. Again according to his autobiography, it was when an old friend sent him a letter with a photograph of himself and some friends relaxing on a boat, raising their glasses to the camera, that he knew this was to be his last film. It hit him that he'd rather be there than on a movie set. "Then the assistant director came and said,'Mr. Cagney, we are ready.' So inside the studio I went, and as they closed the giant doors behind me and I found myself in that great black cavern with just a few spotlights dotted here and there, I said to myself, 'Well, this is it. This is the end. I'm finished."

It shows what a consummate old pro Cagney was that even though he didn't enjoy making it, the success of this movie is really down to him. Eric had a hard time liking him, but I enjoyed his character very much and was rooting for him up to the end, even when the ending was becoming more obvious. Wilder and co-writer I.A.L. Diamond wrote one hell of a funny script, but it's Cagney who really sells it. His timing is fantastic, helped perhaps by his old dance training. There's lots of shenanigans going on around him and a few genuinely funny supporting characters, but this is his movie.

Patrick called the comedy dated and I agree, but only by the subject matter. Some knowledge of the period and political situation will help with the humor. I think being a longtime fan of John Le Carre and his Cold War novels actually helped with my enjoyment of it. It makes a comic counterpoint to Le Carre'sThe Spy Who Came in from the Cold. And who's to say that Coca Cola didn't have more to do with the West winning the war than spies ever did?

Surprisingly this movie was filmed on location. In fact, the opportunity to film in Germany was the reason Cagney took the part in the first place. I say surprisingly because most of it takes place in the Coca Cola offices, the few scenes that were shot outdoors and on the street do add some authenticity to the story.

Both my brothers seem to have enjoyed this movie, but they seem hesitant in their praise of it. In fact, based on their reviews I wasn't expecting very much from it. Because of this I was floored by just how funny it turned out to be. I laughed from start to finish. The only thing wrong with it is Buchholz. Maybe instead of trying to steal Cagney's scenes he should have been learning from him because he is definitely the weak link in this comedy chain, but even he isn't enough to truly detract from the comedy.

This isn't Cagney or Wilder's most famous or well regarded film, but it is a highly enjoyable one. It's also one that I could easily see myself watching multiple times and that, when it comes right down to it, is just about the highest compliment you can pay a film.