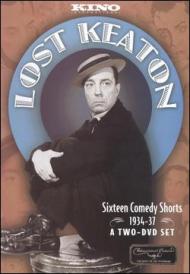 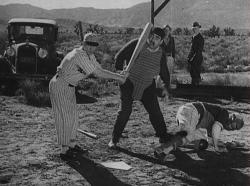 It is not the size of your bat that counts but what you do with the balls.

After a successful silent film career, Buster Keaton found himself in two reelers and supporting roles in sound pictures.  Although a 19 minute talkie, One Run Elmer works very much like a silent film.  Keaton only has a handful of lines and several great stunts.  Even in middle age the guy still had amazing control of his body and could throw himself around with the agility of an 18 year old gymnast.

Elmer owns a lonely gas station in the middle of the desert.  Other than the road that runs in front of it, there is not another sign of life in sight.  One day some men arrive and build a brand new gas station directly across the street, run by a tall guy named Jim.  Elmer and Jim compete for every customer who stops.  When an attractive woman stops they ask her to come to their baseball game.  Jim plays for the Rattlesnakes and Elmer plays for the Bear Cats.

After the woman drives off, the two men have practice across the street, with Elmer's station getting the worst of it.  At first they play catch and then pitch to each other.  Elmer ends up hitting a ball that breaks the window of a passing car.

Later at the game, Elmer plays catcher, while the man whose car window he broke is the umpire.  He clearly holds a grudge as the first two pitches are perfect strikes but he calls them balls.  The game plays as you would expect from Keaton.  Bats get broken, people cheat, including Elmer who puts a bullet inside his bat.

Buster Keaton was a huge baseball fan.  He played it in the summers of his youth as well as at his studio when not making movies.  Look closely at the long haired second baseman  behind the Rattlesnake's pitcher.  It is sports legend Jim Thorpe, who after sports took to playing extras in movies, mostly in westerns.   According to one story, when Keaton realized Thorpe was playing an extra, he asked that the director give him an extra scene.  True or not, Thorpe is given a scene where he catches the ball, does a horrible take, and then relays the ball to the catcher who gets a face full of Keaton's feet.

Films like One Run Elmer show that Buster Keaton never lost his slapstick touch, even when sound came.  He was the master of the prat fall but he was never able to perfect the art of the line delivery.   Sound was here to stay and audiences moved on without him, 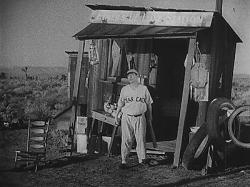 Buster Keaton is One Run Elmer.

I didn't find this movie to be very funny. It starts promising with the competing gas stations in the middle of nowhere. And I agree that Keaton was still in great physical shape at 40, although his eyes were baggier. The years of drink hadn't caught up with him yet and if sound hadn't come along he would most likely still been a huge star in 1935.

Unfortunately when talking pictures arrived they killed his persona. The Great Stone Face seemed always to be deep in contemplation even when perplexed. But when he spoke Keaton's voice made him sound like an uneducated drunk.

The best bits in the movie are the silent gags. I chuckled during the price war, where they keep lowering their prices on a chalk board. Watch the creative manner in which Keaton changes a 31 to an 18. He takes several impressive pratfalls and proves he could still tear around those bases. But some of the jokes are pretty awful.

The batting practice scene is pretty much just a series of balls being hit through every window in sight, including a passing car (as Eric said, the driver turns out to be the umpire at the big game). The worst joke is when Keaton confuses an apple with the baseball. He's playing catcher and when the “ball” is hit the apple is broken into tiny pieces, which Keaton then tries to collect off the ground and even enlists the help of his entire infield. It's more stupid than funny.

Keaton was too talented to ever make a truly awful short and this one has an added historical context with the inclusion of Jim Thorpe. One Run Elmer, by reputation, is one of Buster's better talkie two-reelers but it's still inferior to even his worst silent two-reeler. 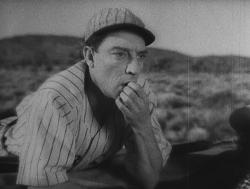 Buster Keaton in One Run Elmer.

I agree with Patrick on this one. It's definitely one of Keaton's lesser films. There are a few amusing moments, but genuine laugh out loud moments are few and far between.

After Keaton was fired by MGM in 1933, he traveled to Europe where he made a film in France and one in England. Upon his return to Hollywood he signed with Educational Pictures to make 16 two-reel comedies, of which this is one. Educational is almost forgotten today, but many big name stars made their screen debuts in one of their shorts, including Bob Hope, Shirley Temple, The Ritz Brothers, Milton Berle, June Allyson, Imogene Coca, Danny Kaye and Roy Rogers. They also became the home of several big name silent comics. Besides Keaton they also employed Harry Langdon and Keaton's close friend, the black listed Roscoe 'Fatty' Arbuckle, who worked for the studio as a writer/director under the pseudonym, William Goodrich.

Much of this short is filmed in silence and only includes a minimum of dialogue. This plays to Keaton's strengths, since as Patrick wrote, his speaking voice was not an asset. However, the silence demonstrates how important the music was in the silent films. Here you have scenes like the one where Keaton dusts the pretty girl's car played with only the hiss of the soundtrack to accompany the actions. A little upbeat, jaunty piece of music would have worked wonders to pep up the moment and perhaps have improved the pace.

As Eric mentioned, Keaton was a huge baseball fan. According to Hollywood legend he only had two questions that he asked when casting his movies and they were, "Can you act?" and "Can you play baseball?" He often staged charity baseball games featuring stars of the day where Keaton would perform several gags during the game. Reportedly he recycled several of those running gags for this short. Perhaps the thrill of seeing Keaton in person made them funnier, because they fall pretty flat on film.

I have never seen a single Keaton movie that didn't have at least a couple of redeeming features in it, but One Run Elmer comes closest.